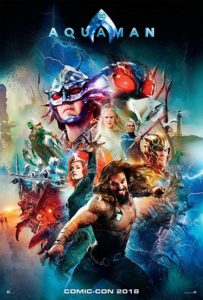 Of all the Superhero movies to come out in recent years I don’t think there is one I can point to where it’s appeal mainly goes to its star. To be fair there are co-stars and costume department and the director and the writers but without the special magic of Jason Momoa, who takes the concept of the character and fits it to his liking this movie would probably be dead in the water (pun intended!).

Opening the movie is a prologue of a man by the name of Thomas Curry (Temuera Morrison) runs a lighthouse and during one dark and stormy night, he sees a woman washed up onshore and un-conscience. He takes her inside and tends to her wounds, she is Atlanna (Nicole Kidman) who is the princess of Atlantis and has fled because of an arranged marriage. But this beautiful woman from a distant land, falls for this man of a different world and for a time love thrives and they have a son together named Arthur, but she has responsibilities and so her people come to take her back, leaving Thomas to raise Arthur alone.

Years later a submarine is being boarded by pirates, they take the ship but it’s hit by something, not a creature, or a missile, but a man. For his introduction, you will have a smile on your face. Jason Momoa is such a larger than life character that is so happy to be onscreen that his joy is sent through the screen and right into you. He looks good with his top off (which happens a lot), moves with swagger and confidence and is either given or writes his own witty repartee which is even accompanied with a few notes of an electric guitar (a fun peppering of fun for the audience).

Joining Arthur is Mera (Amber Heard) a red-headed Atlantian that comes from a noble house and tries to bring Arthur to Atlantis to restore order, he wants very little to do with it but tidal waves keep damaging the shoreline so he’s in for the ride. Mera has special…magic? Where she is capable of controlling the water itself. Heard and Momoa has good chemistry with witty banter that they sharply bounce off each other.

Director James Wan is most well versed in the horror genre, with movies like Saw, The Conjuring and Insidious under his belt but also directed Furious 7 so he’s also cut his teeth on mainstream blockbusters. He channels more of his Furious 7 muscles here though there two moments when he gets to flex those horror skills of his. He has good control of his camera, knowing when to move it and when it should stay still and there are a few neat wipes used within it (though they are just for flash). He and cinematographer Don Burges even make use of the underwater segments with allowing the camera to drift in a fully around, above and below the characters.

Setting the movie primarily underwater, for the most part, helps give the movie a unique look from the other Superhero movies. Atlantis itself is as a city is impressive visual realization with lights that strobe-like cuttlefish and other deep sea creatures and the building take the shape of shells, fins and the bones of marine life. As well as that there are many other locations that we are given because of how the plot is laid out.

This whole movie has a getup and go, waste to time mentality. This is to its detriment because we never get a few precious moments to absorb what’s been said, as soon as something has been explained Arthur gets up and goes to the place or fight someone (though he does seem to be that type of character). Same for other scenes with other characters, we are in a location and they spout their dialog at a fast passe and as soon they are don’t then the other talks and the scene immediately ends.

This is essentially a treasure hunt movie. With artifacts that need to be found and clues hidden in different locations around the world and one thing leading to another. These types of movies, like Indiana Jones, are good for keeping the characters and plot moving and allowing for different locations and action set pieces.

With all the incredible progress that’s been made with computer animation in recent years, it’s a shame that this movie looks so artificial. here are times when we are meant to be within a ship or an undersea castle of sorts or even have our heroes up against a creature from the deep and you will never believe it’s really there. Adding to it are very unconvincing capes that flow up and down and they are like flags of artificiality (I also have no ideas why you would need a cape underwater).

Music is used to heighten the emotion of the scene playing on-screen. Depending on the scene or on the tone of the movie itself it can be loud and aggressive or delicate and nuanced. Sometimes as well no music should be played and the image and the quiet are all we need. But during moments in this movie composer Rupert Gregson-Williams is as subtle as a sledgehammer. Especially during the second act where every emotion the characters express is accompanied by a tune, all dramatic images come with a BOOM and one moment where something dramatic is happening on-screen it comes with choir music. Such blatantly obvious as well as obnoxious use of music don’t enhance but obstruct and make us aware of how the creators want us to view the movie.

Under Zack Snyders creative reign these movies have had a washed out or, murky, dark look to them. All the color is faded down and black is not used as a contrast but dominated the frame, accompanied by browns, bronze, and variations of grey with only a few other shades being allowed in, it is a very unappealing thing to look at. Here we get vivid, lush colors as well and a few darker setting for contrast. Each character has their own main color so they can be easily distinguished from another and pop-out against the environment.

This movie does not have one but three villains from the Aquaman mythos. Primarily there is Ocean Master (whose title they find a way of saying out loud and not sounding ridiculous) Arthurs half Brother that want the throne for himself as well as to declare war on the surface. Black Manta, a deep-sea pirate that is geared with special Atlantian technology that gives him an edge in the fights. It’s a testament to the costume people that they took the original design of the large helmet and made it look good in the movie when by all means it should be hilarious. Finally, there’s The Trench, a race of water-breathers that live in the deepest darkest part of the ocean and have become savage. They are the most recent installment in the comics and are really just Piranha men though are a definite threat. Anyone of these villains is enough to provide fuel for one movie and all three are here, none of them is throwaway and get their moments, it’s just another example of the main problem with the movie, it’s rushed and cluttered.

In terms of DC movies, this is a much better step forward with recent debacles like Man of Steel and Batman v Superman. It is not as strong as Wonder Woman and in terms of a Superhero facing a different culture, this is no Black Panther. Though it is still an everyone is doing an admiral job is all their departments, but the special spice is it’s star Jason Momoa that is able to take it on his broad shoulders and elevate it.