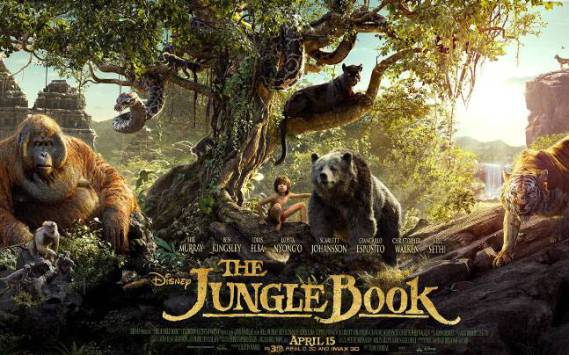 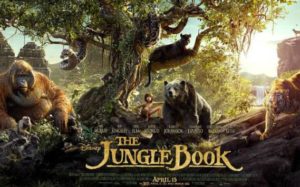 The Jungle Book was always a story structured around set-piece moments. We have a little boy as out fish-out-of-water protagonist that comes across creatures that he doesn’t know about and must overcome. What matters is that the world is defined and that characters that inhabit itare memorable as well as likeable and we must have a few moments of awe within the run-time.

This is still the classic set-up a small child being found in the jungle and, for whatever reason, a panther named Bagheera (Ben Kingsley) finds him and instead of eating him, takes him to a pack of wolves, that also decide to not eat him and raise him as one of their own.

Mowgli in terms of his design with his messy black hair and red pants is right out of the original Disney movie. The little boy playing him is Neel Sethi, who unfortunately just isn’t that good. He somehow is able to speak clear English with an American accent but also speaks it with that hammy way that you’d expect from a minor. How bad is it? Possibly in the range of Jake Lloyd from The Phantom Menace, however we should all keep-in-mind that acting requires concentration and intelligence at a level that we wouldn’t expect from youth. But he can traverse the jungle sets well and interact with the C.G.I. character convincingly.

Eventually there comes a very harsh drought, and a truce is declared among the animals and they gather at a watering hole. Both predator and prey drink, knowing that none can hurt the other. But one sits uneasy, the dreaded tiger Shere Kahn. He has his intense distaste for man and cannot abide having a man in the jungle, he abides by the law but vows that when the water returns, he shall take Mowgli’s life.

Shere Kahn as a villain is probably the most effective element of the movie. He is convincingly rendered through the computer technology and is of course a tiger, which are naturally threatening. He actually has to do very little, most of his impact comes from what is implied, he has a few moments to establish he’s a physical threat and the rest is him being close and knowing that he can rip you apart at any second. And it’s all brought to life with Idris Elba’s vocals, both calming and manipulative and then moving to raging wrath.

So with a tiger that will no doubt carry out his threat Mowgli must leave and be taken the mans village. And of course the journey does not go smoothly, there are obstacles and distractions. The most prominent is the big lazy bear Baloo, played rather well by Bill Murray. Murray injects his classic dry sarcastic, layedback wit in this sloth bear and it is a match.

When we get to King Louie the movie honestly just stops. He is played by Christopher Walken who has such a distinguished voice that it is impossible to think of anything or anyone else. He has long fur that drapes down from his body like a fur coat and sits in his crumbled castle in the jungle surrounded by fruit, treasure and dark shadows giving him a feel of Colonel Kurt from Apocalypse Now. You really do stop thinking about this boy and the tiger that after him and ts all about this giant orange ape being voiced by one of the most unique actors ever to grace the screen.

There are moments in the writing where it just seemed weird and unnecessary. Most of it works as an adaptation, or at least to give us the same moments but in different ways. But others where it seeks to flesh-out the backstory of these character and the choices seem so odd. There were moments of exposition where they forgo and it seemed like a good idea, but they explain them later for some reason, as well as plot-hole I noticed immediately regarding how Baloo and Mowgli meet.

This is a much more dark, threatening interpretation of this story than we have seen before (I do also admit to having not read the book). These animals may talk but they most certainly do still have their teeth and claws. There is even a transition scene with the giant snake Kaa (Scarlett Johansson) which I genuinely think is inspired!

This is not a movie for the younger children that would have enjoyed the original 2D animated movie. This is a much harsher world with more obvious consequences. Is is too tough for any children? I would say that for children twelve or above. The story is still the story but told in a different way and with some very strong elements and others that don’t necessarily let the rest down but do noticeably weaken it. But either way, we still have a movie that has a classic story at it’s center with classic cinematography, good C.G.I. and strong performances from nearly everyone.

Rating: 3 stars out of 5 stars