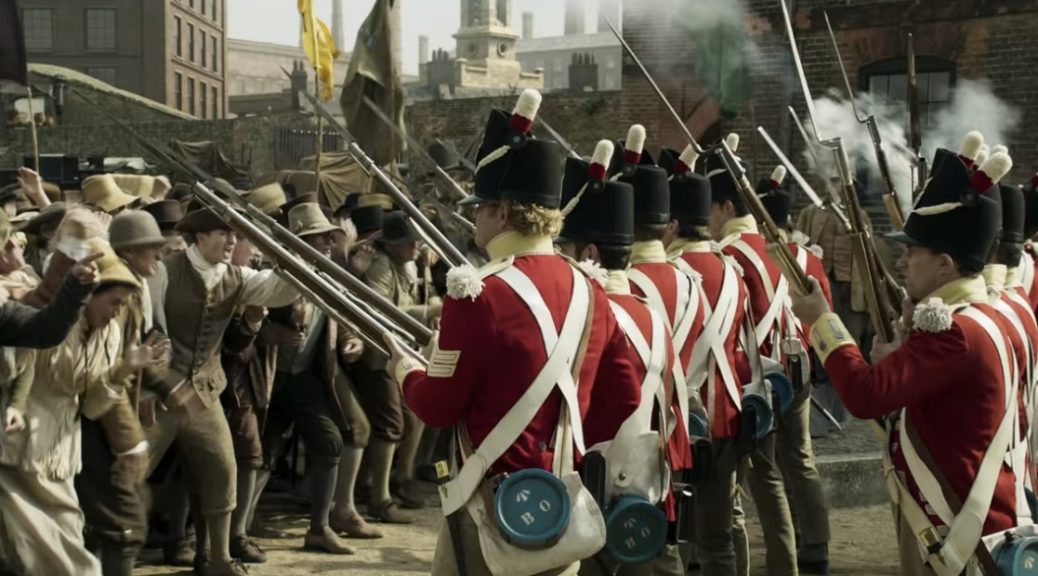 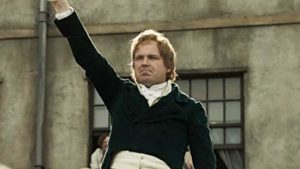 Mike Leigh’s rather uneven film of the 1819 “Peterloo Massacre” is an earnest account of the tragic event, but fails to engage.

Trouble had been brewing for a little while prior to this, as local malcontents had been rousing people in Manchester and surrounding area, to act about the social injustices of that time, in particular,  the lack of ability to vote for local representation to Parliament. This corrupt system exploited by the wealthy to their advantage, didn’t see any change until the Reform Act of 1832.

Mike Leigh is a fine writer and director. His “Life is Sweet” is one of the finest British films of the 1990’s. There isn’t much in “Peterloo” to proclaim that life is sweet for the vast majority of British people in 1819.

After the huge financial cost of fighting Napoleon’s French Army for 20 years culminating in Wellington’s triumph at Waterloo in 1815, the country endured a pitiless state of austerity, that makes the current situation in Britain pale into insignificance. The link between Waterloo and Peterloo is conveniently carried by Joseph, a bugler at the first and victim in the second encounter. A hero suffering from PTSD after the battle, and a sabered casualty induced by the actions of an intoxicated member of the Manchester and Salford Yeomanry in Manchester.

After the opening scene of Joseph at Waterloo, you witness his long trudge home that he and his companions had to make, whilst parliament decided to award Wellington a colossal financial reward for his victory. When Joseph eventually arrives home, in a state of virtual collapse to the dire living standards that people of the working class had to endure, you can quickly assess where Mike Leigh’s support lies.

This is a very promising start, but then the film stalls going on an endless stream of set pieces of public meeting and political conversations. It seemed like one of those ubiquitous historical documentaries whereby B actors dress up in garb distinctive of their time and station and invariably stare into middle distance. Whilst accepting that you have to provide sufficient background material to explain the ensuing climax, I did feel that I was back in the classroom attending a history lesson, rather than seated in a cinema to be entertained. And I love history!

The climax at St. Peter’s Field is well executed, but, again, not particularly engaging.

Mike Leigh has written a highly eloquent script and has a fine cast of British character actors to work with, and, where the film works best, is in its domestic scenes and personal engagements with Henry Hunt, (Rory Kinnear). He portrays Hunt as a vainglorious man, donning his conspicuous white hat – a brilliant orator, but to what extent he was working for the working class and to what extent he was promoting his own notoriety is questionable. (See image above).

Maxine Peake,  as Nellie, is a fine actress. She plays a stereotypical Manchester mother struggling with bringing up a family in early nineteenth-century Britain,  but is wasted in what she has to work with. Being a Bolton lass. she could play her role in her sleep. At least her accent is authentic, which is more than I can say about others, whose lapses made them sound more like coming from Bristol than Manchester.

Overall, though, the acting is fine. Tim McInnerny as the Prince Regent returning to the period that he so memorably played as Lord Topper in Black Adder the Third, manages to portray the soon to be George IV, as a totally odious man, an opinion that historians tend to agree with. The final scene of the film, where the Regent in an audience with Prime Minister Lord Liverpool, (Robert Wilfort) and Home Secretary, Lord Sidmouth, (Karl Johnson), based on historical fact, has George offering his congratulations to the military for imposing the tranquility of the scene, would be laughable for its irony, if it wasn’t for the fact that 15 men, women and children had been fatally injured and an estimated 400-700 sustaining injuries from the sabre charge of the militia.

Peterloo is obviously a labour of love for Mike Leigh. He has a point to make, and, by and large, he makes it. He doesn’t go overboard with sentimalisimg the working class. Some are odious, and not all the villains of the tragedy, the magistrates who ordered in the militia were evil.

It is a sobering thought as we navigate the tumultuous waters of Brexit, that very nearly 200 years ago, people in Manchester, in particular were fighting for democracy. After the Battle of Waterloo, soldiers returning home, suffered in the same way as those having fought in WW1. Not a land fit for heroes but one of austerity and hardship. 1815-1918-2018. I believe that many people, in part, voted to leave the European Union because they thought that things couldn’t be any worse than they are now. Perhaps they need to be reminded by films like Peterloo, that, in comparison to our ancestors, nearly all of us live a life of luxury. The perfect irony is that in 2018, one of the areas that are the staunchest supporters of remaining in the Union, Manchester, is the same community that fought for democracy 200 years previously. Now, you could argue, these people have become  victims of the political process that they fought and died for.