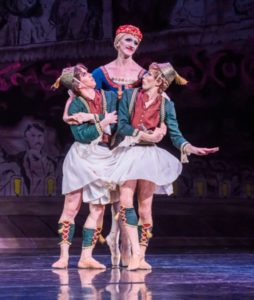 On an overcast autumnal evening, I dragged myself down to Cardiff Bay to see Les Ballets Trockadero de Monte Carlo.

Now my dear readers, when I write dragged I don’t mean it in the Biblical Sense. No, I didn’t don my favourite purple tutu and hot-footed it down to the recently rescued Cwmbach railway station after the weekend deluge, and travelled down the Cynon Valley on the brand new Transport for Wales network. No… not after last time and my close encounter near Penrhiwceiber. And now that my Arrival Trains ban had been lifted…well, you know. Anyway, this is dragging on a bit

Les Ballets Trockadero de Monte Carlo – doesn’t that roll of the toungue and sound as appetising as a Parisian baguette..Ballet and France are synonymous.  Vaslav Nijinsky and his lover  Sergei Diaghilev after creating their name in their Russian Motherland relocated to Paris where they were fixtures in salons of the avant garde and created their questionably best balletic work. In more recent times another Russian immigrant  Rudolf Nureyev found inspiration in a Parisian environment and the elegance of  French prima ballerina Sylvie Guillem have helped to elevate French ballet to the pinnacle of ballet aestheticism.

And of course, we have Les Ballet Trockadero de Monte Carlo., to take it that step further.

The troupe was founded in New York City in  1974, but origins go back a couple of year earlier. Originally playing at off-Broadway venues they received  such favourable reviews that their reputation spread and the venues they played at broke out of NYC to firstly a wider American audience and then worldwide. Ten years ago, they performed at the Royal Variety Performance in front of Prince Charles.

Classical Ballet is easy to make fun of. Who hasn’t performed gormless renditions of such standards as “The Dance of the Sugar Plum Fairy” getting on your pointes and then immediately falling off them? I am pretty sure that I have alluded to my own performances of the “Dance of the Sugar Plum Elephant”. – with my own choreography I hasten to add.

The difference here, and it is a substantial one, is that the dancers of Les Ballet Trockadero de Monte Carlo are damn good. If you cast an eye over their pedigrees, there are dancers on display that are associated in the past with ballet heavyweights such as Chicago’s Joffrey Ballet School,The Dance Theatre of Harlem,San Francisco Ballet School, English National Ballet, Beijing Dance Academy and the Central School of Ballet, (London). Although, as you might expect, the “ballerinas” are largely American, the all-male troupe also has representation from China, Japan, Cuba, Colombia, Spain and Italy.

The Cardiff programme, which seems typical of the majority of other venues it is playing at on their British tour is in five segments.

After a humerous off stage introduction announcing cast changes to the advertised programme, the curtain drops on dancers in their virgin white dresses assuming a pose of unexpectedly artistic beauty. The segment is taken from Les Sylphidess with music by Chopin. Eugenia Repelskii solos in The Valse, followed by Nina Immobilashvili in Chopin’s sublime Prelude, Opus 28,No. 7.  You’ll know it when you hear it. Nicholas Khachafallenjar and Alla Snizova amaze you with respectively, their power and grace, before the return of Nina Immobilashvili dazzles you with another Valse before the curtain falls and the first interval.

There’s not so much shenanigans on show for the next two parts, Harlequinade Pas de Deux and Trovatiara Pas de Cinq allowing such illuminaries as Sergey Legupski, Helen Highwaters, Guzella Verbitskaya and Guzella Verbitskaya showing their considerable talents to maximum effect and Eugenia Repelskii making a welcome return.

For me the highlight is Olga Supphozova’s rendition of “The Dying Swan”. 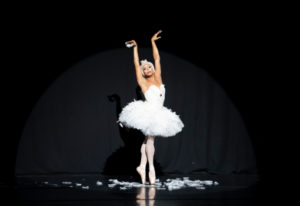 The segment begins with a searchlight trying to locate the stricken bird in a scene reminiscent of the clowns in Cirque du Soleil’s Varekai. When she is eventually tracked down the audience is treated to a performance of such artistic beauty, where Ms Supphozova acts out the death throes and involuntary spasms of an intensity that Anna Pavlova could only have dreamed about, all accompanied with  extreme exaggerated  moulting feathers – it is something to behold. Diaghilev would have blown a gasket!

After the second interval, the performance concludes with the famous collaborative team of Ludwig Minkus’ s music and Marius Petipa’s Paquita which was relatively faithfully performed. I’m grateful that The Kingdom of the Shades from La Bayadere also conceived by this pair has been left alone.

Throughout the performances, the audience is kept on their toes picking out the buffoonery on show. The petty vendettas, the mistimed errors, the sideways glances, the knowingly awful choreographic interpretation, the narcissistic performers, there is so much going on you can’t expect to notice it all.

By the time the troupe engage in their crowd pleasing ensemble dance to the appropriate  music of, “New York, New York”whilst wearing the most kitsch of hair gear a la mode of the Statue of Liberty, many of the audience  were on their feet.

The costumes would adorn the most prestigious ballet companies and if that’s not enough for you, then you also have the exquisite piped music.

However, at the end of the day, it is a one-trick pony. Les Ballets Trockadero de Monte Carlo, know their audience though, and any chance of boredom creeping in through repetition, is negated by the interludes of dancing excellence,

By deftly pastiching  the most classical of sensory art forms, Les Ballets have created their own.

Cash in your chips, (Monte Carlo – yeah?) and get down to Cardiff Bay for the second and final performance in Cardiff on Wednesday evening, but check availability as the auditorium was near capacity this evening.