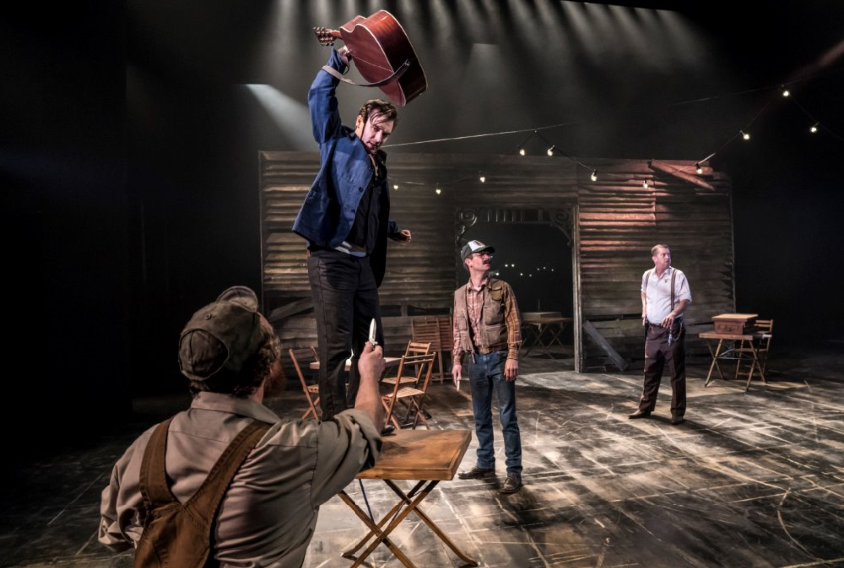 The set design may be far more sedate than in her last production, Home, I’m Darling. But the cast assembled by director Tamara Harvey for her latest offering Orpheus Descending spark off one another with electrifying chemistry. One wonders what she does during the rehearsal process that nurtures such strong unity among cast members, and produces such creative energy that then flows out on stage, with amazing results.

In this adaptation of one of Tennessee Williams’ lesser-known plays, Lady and Val might be advertised as the two main characters. But it is very much an ensemble piece, with the most absorbing scenes being those in which a whole host of players feature. Spread across the stage, the dialogue zips from one to another, bouncing around like an entertaining ball game. The script is so sharp and punchy. And the dialect coaching given by Penny Dyer and Nick Trumble only enhances it further. It makes for a very immersive play – the protrusion of the stage to the front row, and the use of the aisles either side of the auditorium, intensifying this experience.

Not to say that there aren’t some amazing individual performances however. Laura Jane Matthewson brings such a delightful humour to her character Dolly Hamma that her mere presence on stage brought a smile to my face. Seth Numrich’s turn as traveller and musician Val is full of charisma. His guitar skills might not be up there with Val’s hero Lead Belly, but Numrich nevertheless has the unenviable ability to own a stage without ever overshadowing his fellow cast members. He is an excellent match for Hattie Morahan, playing opposite him as Lady. Morahan brings a powerful sense of independence to the role that is both frustrated by her marriage to Jabe (Mark Meadows) and teased out through her developing romance with Val. Morahan’s performance grows steadily throughout the play, becoming one that, in many ways, defines the second half.

I reserve special praise for Jemima Rooper, who is nothing short of excellent as Carol Cutrere. The rebel, the rouser; the misfit and the mistress in this portrait of small-town life, Cutrere is such a fascinating character. She is made so by Rooper, who grants her such a vast expanse of unashamed openness that I could only wonder at how Rooper manages to retain a slight air of mystery about her. Yet she does, in spite of her character’s exhibitionism; there remains a hidden depth to her even as her vulnerability and brokenness are so apparent. If Morahan is the star of the second half, Rooper is most certainly the star of the first.

Tamara Harvey’s production makes you wonder why Orpheus Descending has not been produced more regularly. It is perhaps because Harvey has the ability to nurture, and the skill to mine, the best of performances from her actors. In other hands, perhaps it would not be as gripping or as interesting. But it is here, largely because of the evident chemistry that exists between the cast members. One can only credit Harvey with developing that. And it is this which draws out the extra quality that sees such great individual performances, which combine beautifully to create such an excellent overall production.