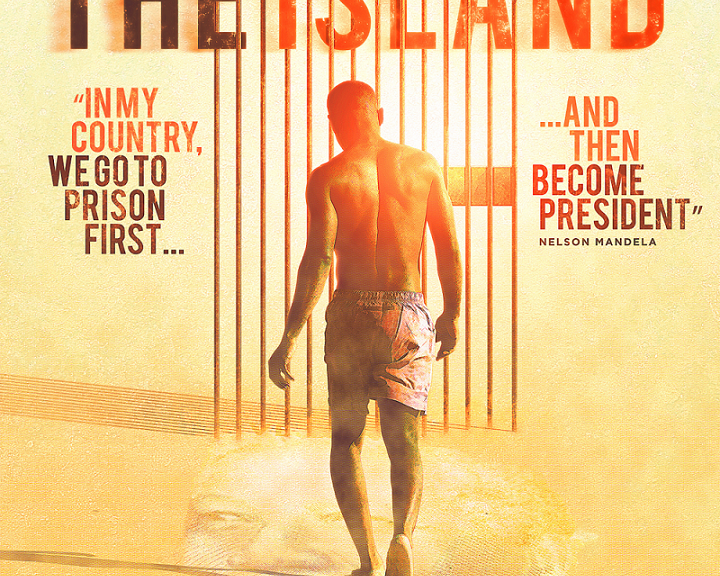 When “The Island” was invited to play at the Royal Court Theatre, London  in 1973, such was the incendiary reaction to it’s Cape Town premiere shortly before,that  Fugard’s fellow devisers,  John Kani and Winston Ntshona, also the actors of their namesakes in the play, had to pose as Fugard’s chauffeur and gardener, to allow them out of the country. The fact that Fugard neither had a chauffeur or a gardener was beside the point.

“The island” is one of a group of three plays by Fugard collectively known as “The Statement Plays”.  Together with “Statements After an Arrest Under the Immorality Act” and “Sizwe Bansi is Dead” both from 1972, the plays were developed in workshops  through Fugard’s company, “The Serpent Players”.

“The Island” is based on Robben Island located off the coast of Cape Town and was the notorious home for political prisoners going back as far as the end of the 17th century. It’s most famous inmate being Nelson Mandela who was incarcerated there for eighteen of his twenty-seven years, up to his release in February 1990.  Mandela and his African National Congress colleagues were greeted with the ominous words upon their arrival, “This is the island. This is where you will die”.

Such was the sensitivity of this place, ironically now a World Heritage Site, that the title of the play had to be changed to “Die Hodoshe Span”, or “Hodoshe’s Work Team.” Hodoshe, (in Xhosan it means a “carrion fly”),  refers to a particularly brutal prison guard who is an unseen ominous presence throughout the play. The reference suggesting the parasitic nature of the South African apartheid regime in power, seems to have flown over the heads of the government.

The play was written in 1973 at a time when Apartheid was in full throttle in South Africa. A shameful policy that shows man’s inhumanity to others due to  a different colour of skin, is at its most repulsive. Yet for almost the duration of Apartheid, from it’s beginnings in 1948 to it’s eventual demise in the early 1990’s, the South African government were rigorously supported by lucrative economic deals with the U.K. This point is made explicitly clear as soon as you enter the auditorium by two monitors on either side of the stage relating this in text. This also mentions Prime Minister May’s little dance when she attended earlier this year to mark the centennial birth of Nelson Mandela – notorious not only for its artistic ineptitude but also to the insensitivity of the  British role in Apartheid, which is not something to dance about!

Athol’s “The island” is  Brechtian in its structure. Where the two protagonists display their  human strengths and weaknesses yet are caught up in a system that is beyond their power to influence or change. The didactic nature of the play also connect to Brecht.

Fio’s production breaks away from the direction imposed by Fugard that calls for mime to represent the Sisyphean nature of the two prisoners’ daily tasks for a period of at least 15 minutes. This production opens with a powerful statement by the two actors emerging from opposite entrances behind the audience. They look you straight in the face and tell you why they burnt their passports. In actuality, in the play, only Winston has burnt his passport, an exceedingly serious crime that resulted in a life sentence, as the passport system was a fundamental instrument for imposing Apartheid. John had received a ten-year sentence for being a member of an illegal political organisation.  The onerous nature of the daily tasks the two prisoners endured is exemplified by the two actors repeatedly rolling the other over their back, and the physicality of doing this probably determined the truncation of the 15 minute set mime.

An important introduction to the play, something that Fugard tended to do at this period of his writing, is the introduction of the classical play, Antigone by Sophocles, which in turn, is  based upon Greek mythology. It is clearly apparent that Creon, King of the Thebes represents Apartheid and Antigone herself personifies human rights. She is in fact, in literature the first conscientious objector. This piece of metatheatre, has Winston comically adjusting his few clothes to represent a skirt and donning two tin drinking vessels to represent breasts. By choosing to re-enact a scene from Antigone to it’s audience, (which one would surmise, at least  comprises of members of the prison staff), itself as a weapon against those who think they are directing the theatre of life in South Africa, John and Winston transform their theatre of acquiescence into a Brechtian theatre of protest.

In the final words of the play, Winston, still dressed as Antigone, takes a turn addressing the audience, “Brothers and Sisters of the Land! I go now on my last  journey. I must leave the light of day forever, for the Island, strange and cold, to be lost  between life and death .., Removing his Antigone costume, Winston then addresses the audience as  himself, “Gods of our Fathers!  My Land! My Home! Time waits no longer. I go now to my living death, because I honoured those things to which honour belongs” John and Winston upon hearing the shrill whistle that features throughout the play, and which represents authority, resort back to their Sisyphean tasks.

Heady stuff! No wonder the Apartheid government felt compelled to censure this play and constantly arrest actors who played in it.

Both Joe Shire as John and Wela Mbusi as Winston embody the two characters that they are playing with great skill and agility, and deliver Fugard’s beautifully cadential script perfectly. They manage to change their relationship to each other determined by the script after John finds out that his sentence has been commuted to three years, leaving him only  three month to remain incarcerated, and Winston’s realisation that he is going to be even more isolated after his friend’s departure is handled in an understated way that is even the more powerful for it.

An important feature of this play has to be the lighting. It needs to reflect the claustrophobic nature of being incarcerated in a small space and expresses the optimism of a better existence outside of their unnatural environment. Ryan Joseph Stafford manages this by the simple technique of using low light to empathise the prisoners’ isolation and lack of space, and brilliant blinding light when they express their hopes and desires.

“The Island” is an elegant play that explicitly shows the dehumanisation of men purely based upon the colour of their skin. It is as relevant now, in an increasingly divisive society as it was over 40 years ago, when written. I would thoroughly recommend you seeing this important play from one of the leading contemporary playwrights in world theatre.