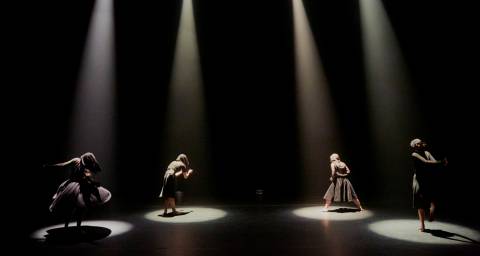 I must begin by making a confession. Being a critic, you should be able to define what is good or bad abut a production from an informed position.

This is my inaugural dance review and I am not writing from an informed background. I used to watch occasional contemporary dance theatre in London, and in Montreal, but it must be nearly twenty years since I last saw something in this genre, and this is the first time in Wales.

Not wishing to make a song and dance about this, I tentatively submit the view that maybe in this particular art form, this isn’t too big a problem. This point, I shall return to when I review the third and final piece in this production.

The programme consists of three short pieces and collectively provide a European flavour.

The first dance, Omerta is choreographed by Italian Matteo Marfoglia. 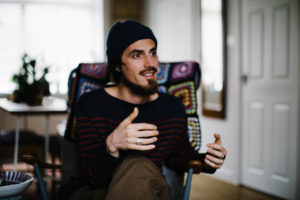 Matteo acts a Rehearsal Director for “Roots” and is very passionate about the subject matter of “Omerta”. When he talks about it, he does so in an engaging manner. I happen to know this, because, by chance, ( well I think it was by chance), Matteo happened to be seated next to me, so I was in the ideal position to bombard him with questions. Despite my naivety, he answered these questions with great patience and humour and the insight he provided gave me a clearer idea of how this piece was devised.

“Omerta” concerns the role that women in Italian society, located in areas still largely under the influence of the Mafioso, combat the oppressive nature of their existence. Dressed entirely in black, and beginning with veiled faces, the four female dancers are strewn across the space, each with pails carrying water.

The background music starts with a metronomic beat and also ends in the same way. I interpreted this to mean to mark the endless passage of time that the conditions the Mafia has imposed on Italian society, and women in particular, within that void,  and assisted by the nature of its masculine domination. The spotlights highlighting individual dancers fleetingly, and the four dancers collectively, heighten the tension and focus your attention as the dancers repeat their actions of carrying and cleansing themselves with the water they are carrying.

I put it to Matteo that could the black veiled attire and the pseudo-religious music that followed, be interpreted that the four women were widows, victims of Mafioso vendettas and that the music represented the  powerful influence of the Roman Catholic Church in Italian society. Matteo answered in the negative, that the dress and music represent the region of Southern Italy that the piece represented.  Maybe I was thinking too much about Ford Coppola’s Godfather trilogy at this time.

With the removal of the veils the dancers sweep into a more expressive form that signify their impassioned attempt to break the shackles of this oppressive society of murder, extortion and fear.

I asked Matteo if he would like to present this piece in Italy and how it would be received there in contrast to Wales. His eyes immediately lit up and he answered that he would love to, but the nature of the piece would make it explosive to perform in certain parts of Southern Italy where the Mafia hold is still strong. He was inspired to create the piece after the murder of four judges in Sicily in the early 1990’s and the resultant protests by a group of women to these assassinations. Their courage in a very dangerous environment moved Matteo to create “Omerto”. I likened this to the Peace Movement instigated in Northern Ireland during The Troubles and he agreed.

Matteo Marfoglia is the recipient of a Creative Wales award from The Arts Council of Wales. He has also been awarded a research grant  which he is currently undertaking. He trained in Amsterdam and formerly was a dancer for the NDC Wales before branching out recently on his own and  becoming a freelance choreographer. He is recognised as a future leader in British dance and on the evidence on show in “Omerta”, it is easy to understand why.

The second piece “Bernadette” is a solo work choreographed by Caroline Finn and performed by Camille Giraudeau.

Caroline is NDC Wales’s Resident Choreographer and she also acted as Lighting and Costume Designer for this piece.

The highly effective background music is provided by French band Nouvelle Vague, “In a manner of speaking”. The lyrics of which have a real connection to this piece.

The dreamlike quality of the sound also enhance the dance.

The piece which I found to be amusing at times begins and ends with a taped male cooking guru giving cooking tips that are received by the dancer in, almost a robotic, catatonic state.

As she starts applying these technqiues in her cooking preparation, she suddenly and totally unexpectedly throws herself across the kitchen table, projecting an egg that explodes in front of  front seat audience members forcing them to involuntarily  take evasive action. 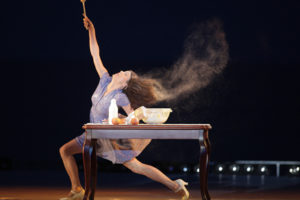 This is repeated, not only with eggs but with flour, so by the time the performance has finished the space had resembled being hit by a bomb.

When dancer Camille breaks free from her catatonic existence she snatches off her wig and dances with great abandonment before resuming her original “Stepford Wife” existence as the guru’s voice re-emerges over the background soundtrack.

I felt that this piece, in a way, is a companion to “Omerta”. I recently read that a mother’s life bringing up up a young family is the equivalent of working  2.5 jobs. The feminist slant to this work, shows the unnoticed work that many women have to endure in the household and their ambition to break free.

Caroline Finn has a growing reputation for her work and a previous NDC Wales composition, “Folk” and this one have received rave reviews. 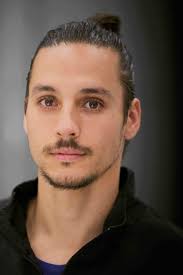 Mario is Artistic Director of Marcat Dance Company. “Marcat Dance connects to the human spirit and finds inspiration from world cultures, rituals, and landscapes” according to its website and all come to notice in this production.

Atalay is Spanish for Watchtower and reflects a personal experience that Mario and his wife have when walking to a viewpoint near their Southern Spanish home. At this place is a watchtower and Mario feels a close sense of existence to the elements at this place and the natural landscapes of the mountains and the undulating land. He thinks about the four walls of the watchtower that reach out to the four points of the extended compass and imagines the fusion of the different cultures, exemplified through their dance and music. He takes you on a journey using a wide range of culturally orientated music and invites you to connect emotionally through the movement of dance. It is a personal odyssey of spiritual emotions and Mario encourages the four dancers, two of each sex, to input their own feelings revealed through the unique form of dance.

I struggled to find meaning in this composition and voiced my confusion about what the individual segments of the piece, were telling you. I put this question to NDC Wales Artistic Director, Fearghus Ó Conchúir who was with the four dancers post performance. The question met with an initial hesitation from Fearghus and when I glanced at the performers they collectively seem to have that “don’t ask me, I’m only the dancer” look on their faces. However, a consensus was arrived at that basically reached the place that I found to be what Mario’s intentions were.

So maybe I was searching for a meaning that doesn’t exist. That it is the journey and the emotions that you feel through the expression of dance, that is the thing. If there is one lesson that I learnt in this experience is that there doesn’t have to be a precise definition to contemporary dance, then it has been worthwhile.

The piece itself did convey feelings of strong emotion and beauty, love and humour, and the strong costume design and lighting made it a fitting conclusion to a wonderfully diverse programme.

The dancing is excellent throughout. I feel that not only are the dancers putting body and soul into their dancing, they appear to be thoroughly enjoying it along the way.

One unusual feature that I particularly welcomed is how Artistic Director Fearghus Ó Conchúir  introduced each piece and immediately afterwards invited you to speak to your neighbour in the audience about it and to examine each others feelings that came out of it. In addition, at the end of the programme, the audience has the opportunity to put questions to the dancers.  Together, this is a great innovation and helped a contemporary dance ignoramus such as myself to engage more meaningfully in the experience they are experiencing.

I came out of the dance space questioning myself on why .  I had missed out on a generation of experiencing an artistic genre that is a medium for mixing dance expressionism and technique, music, costume and lighting in a collaborative way that is utterly cool.