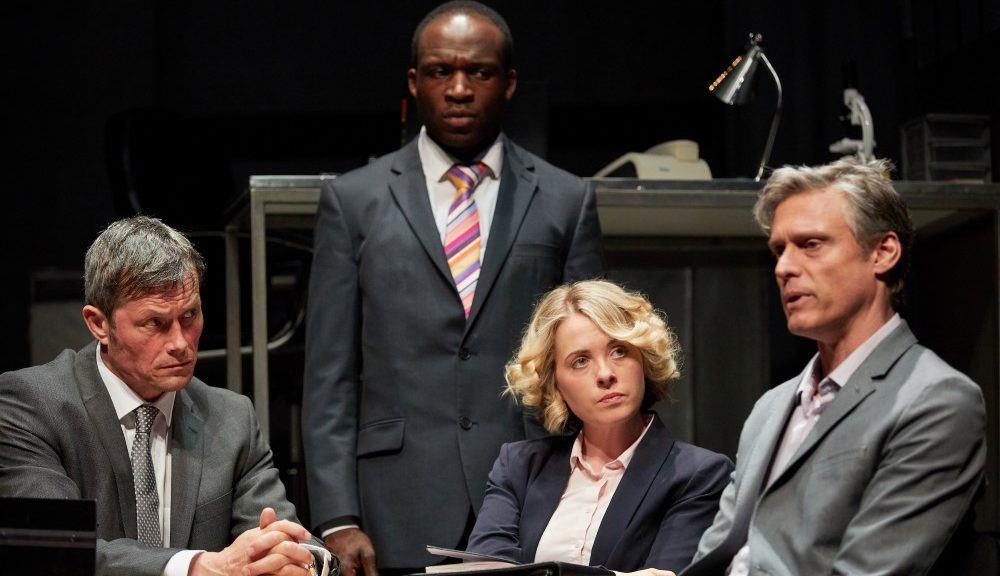 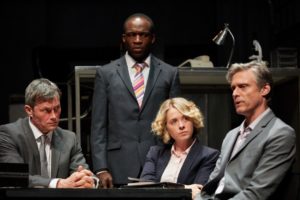 Aficionados of the crime novels of multi-award winning playwright Peter James and their central character, Detective Superintendent Roy Grace, will no doubt have been thrilled (forgive the pun) to discover that another of James’ books – the third in the series – has been adapted for the stage.   In Not Dead Enough, DS Grace has still not come to terms with the unexplained disappearance of his wife ten years ago. The DS’s present relationship comes to the fore in a complex murder case with the main suspect claiming to have been sixty miles away when he murdered his wife – despite the fact that all the clues add up. Intriguing, eh?

Unfortunately, there is a caveat. What promises to be a gripping evening’s entertainment is a slow burner with a lack of pace that does not bode well; the wait for the kettle to boil seems interminable. Director Ian Talbot does his best, but this world premiere production, adapted for the stage by Shaun McKenna, whose adaptations of James’ previous two crime novels worked so well, fails to get going until almost the end of Act I. It is difficult not to become bogged down in a surfeit of minutiae, most of which ignore the sound advice of “show not tell.” Do we really need quite so much technical info as to what goes on behind the scenes in police investigation of murder? (Murders, actually – there is more than one.).

After a three year run in ITV’s Emmerdale, Bill Ward stars as the dishy DS, focussing on the man rather than the senior police officer. This is all very well, but at times it can make one feel irritated. When he does manage to keep his mind on the job, Ward’s Grace could be more emphatic. Opposite him, television presenter Laura Whitmore makes her professional theatrical debut as Cleo, Grace’s amore, who spends her working hours in charge of the mortuary and her off-duty time with Grace – when he is not off seeking the solution of the wife whose disappearance is still a mystery. Stephen Billington is suitably outraged as Brian Bishop, the chief murder suspect but could give a more sympathetic performance.

The action moves between Brighton and Hove police station and the mortuary. For those of a macabre taste, the latter setting may have added an enjoyable chill to the proceedings, but might have worked better if designer Michael Holt had been given the go ahead to design two separate sets rather than the split set used, with front of stage as the former with the freezers and cold rooms of the mortuary at the rear. Lighting designer Jason Taylor comes to the rescue to some extent with lighting that chills in all the right places.

The DS Grace crime novels are deservedly best sellers and the previous two books adapted well for the stage. Their popularity almost filled the theatre on opening night in Cardiff with an audience already on the edge of their seats with anticipation. Muted applause at the end was a reflection of the feeling that what works on the page doesn’t always cut the mustard on stage.

Runs until Saturday 24 June at the New Theatre Cardiff.