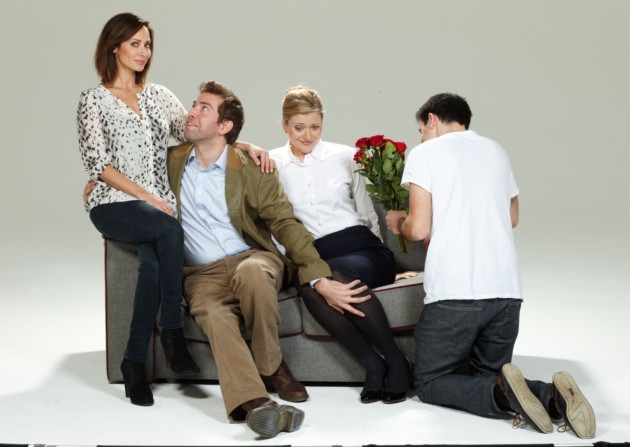 Things We Do For Love  New Theatre, Cardiff

A multi-layered romp – in more ways than one – Things We Do For Love was first staged in 1997.    The humour, and the dark edge behind it, are still relevant today, as indeed can be said of all of Ayckbourn’s plays.  Bedroom farce – yes, and you may choose to take it at its face value.  It is, indeed, a bedroom farce par excellence, as one would expect from one of Britain’s master playwrights.    But in fact there is much more to it than that – it could in some respects more correctly be classified as a tragic-comedy for that is what it is in the end.  For this reason, it is a piece that needs an expert hand on the tiller if it is to succeed.  Director Laurence Boswell shows his mettle with this revival by Theatre Royal Bath Productions, a good understanding of Ayckbourn and whence the piece is coming.

On the surface a light, at times raunchy, comedy, and staged on a single set throughout, there is much to laugh at as the characters lurch from one relationship to another in a romantic whirlwind of a plot..  The set, that of a middle floor flat of a converted house owned occupied by the elegant and glacial Barbara, allows the audience to see into both the flat above and the flat below.   While Barbara resides in lonely splendour on the middle floor, the upstairs apartment is the perfect bolthole for Nikki, Barbara’s old school friend, and her fiancé Hamish, while the downstairs room is occupied by Gilbert, a part-time postman and amateur plumber man who lusts after his ice maiden of a landlady in a somewhat unconventional way.  Feelings change and relationships crumble as the plot develops and the characters reveal their true selves.

As Barbara, Claire Price gives us a believable, no nonsense career girl who has no time for men let alone romance and slides seamlessly into portraying the love-stricken, not to mention energetic in the bedroom and elsewhere, and abandoned female which she becomes.   This is all due to her falling, big-time, for Hamish notwithstanding the fact that he is engaged to Nikki, avowedly her best friends since their school days. As Hamish, Edward Bennett looks suitably uncomfortable in the immaculate surroundings of Barbara’s flat while managing to project as a sort of male arm candy for whom women (literally) fall.

Making her stage debut, Natalie Imbruglia looks suitably fragile as Nikki, playing her as the stereotypical helpless-little-woman, irritating at times and yet managing to enlist sympathy and help from everyone including downstairs neighbour Gilbert.  Simon Gregor shows his expertise in this role, with evident relish and giving it full throttle.  The zany Gilbert has his dark side, and Gregor is adept in showing this beneath the banter.

This is classic Ayckbourn, showing us that what we see is not always what we get.  Things We Do For Love will strike a chord in many ways.  Ayckbourn’s cynical view is that love knows no boundaries and he is, of course, right.

Runs until Saturday May 17th