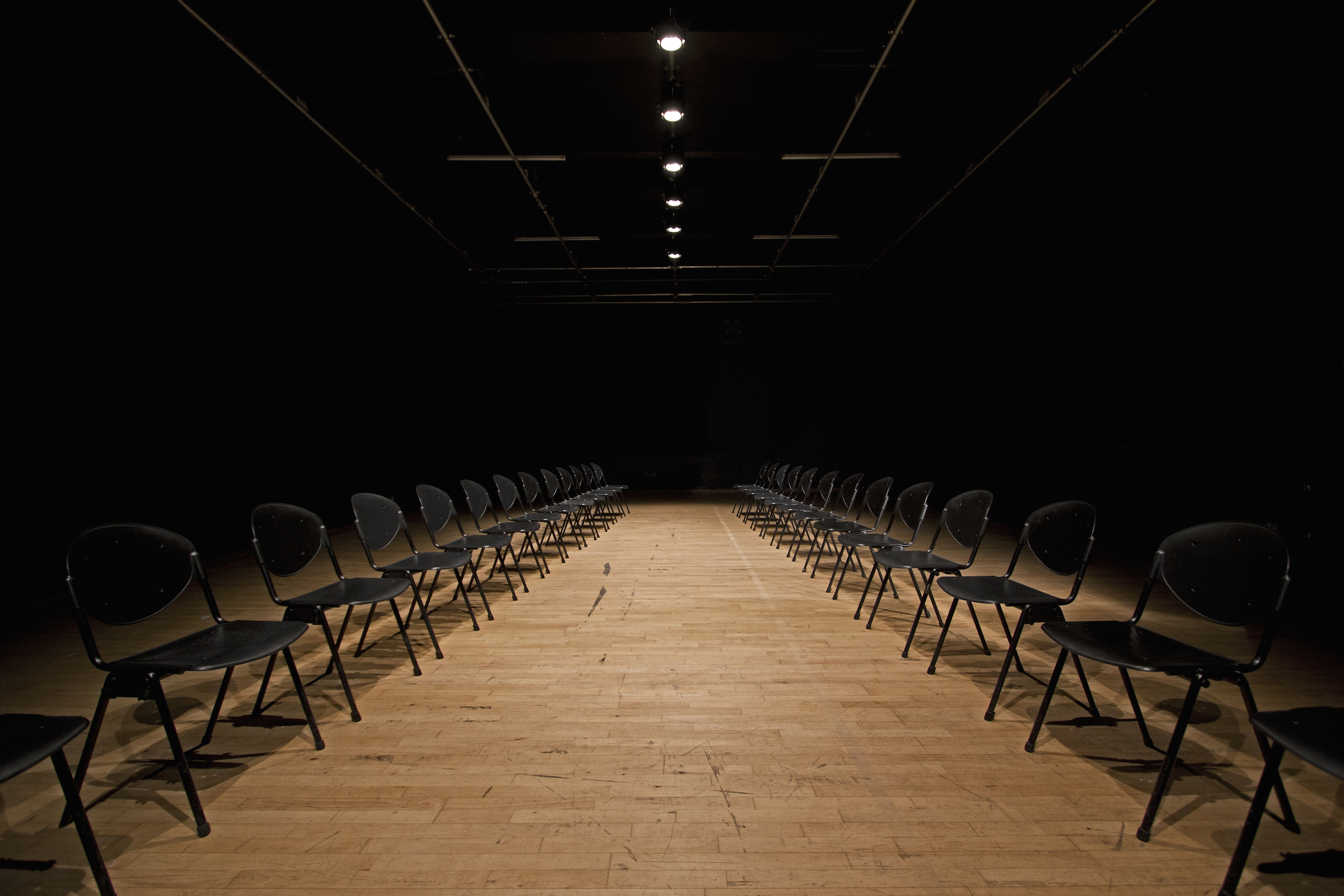 I opened the door to the dance hall at Chapter Arts Centre, lots of unknown faces turned their heads and peered at me. There were two long rows of chairs facing each other with an aisle running down the middle. The one woman who was standing said ‘hello’ and I quickly chucked my bag on the floor and placed myself onto an empty seat. The standing woman faced away from me and carried on with her performance, if she had ever stopped. I had no idea what to expect but I was certainly intrigued.
The woman was attempting to dance. I say attempting because she would interrupt her movements, stop herself and start again, trying to achieve something, I wasn’t quite sure what, commenting on what she was doing all the while. It was unclear whether I was watching a wholly scripted piece or a workshop for dancers which was more spontaneous and organic. This blurring between reality and performance was clearly a theme they were playing around with. Comedy was created through her almost childlike frustration at the inability to fully let go. The audience was kept in suspense as we waited for the dance to flow.
‘Maybe you could do it like this’ piped up someone from the other side of the room. Jo Fong stepped into the space. Her energy was immediately captivating. Fong talked a lot about her energy, expressing how she was bringing it into the room and giving it to the audience. There was definitely a sense of the performer enthusing the audience; her movements were big and bold, she had something inside her which didn’t know how to get out. Again, there was that tension. It seems to be a comment on how people struggle to give in to their emotions, stopping themselves from being totally free. Fong at one point did this sporadic movement with her arm which she called the ‘contemporary arm’, stating it ‘wants to express itself.’ There was a battle for control over the body, limbs did not perform as wanted and had a mind of their own.
After advising the first performer on how she should move, a third dancer, Beth Powlesand, came up and took to the floor. They all seemed very natural in the space, making the most of the strip between the rows of chairs. The further it went on, the more I realised how much of it was staged, which didn’t diminish the piece as we were supposed to be aware of its constructed nature.
There was a key element which really made it a unique and original experience; the audience. The show was shaped by the audience as the performers were continuously responding to the people watching, to the energy of the room and incorporating it into the performance.
As people started to understand what the show was about and got more relaxed, there was a change in the power dynamic. One audience member controlled Powlesand like a puppet on a string, the dancer imitating her as she freely moved her arms. It was a fascinating development because we were no longer just watching the show, we were a fully-functioning part in it. I’ve always been very interested in audience interaction and the relationship between performer and viewer and the show explored this wonderfully. Laura Lee Greenhalgh, the woman who said hello to me at the beginning, noticed I was furiously writing notes and commented on it; she looked down at the paper and read aloud ‘who is the leader? Who is being lead?’ It seemed to create a strange electric current between her and Powlesand, who were mirroring each other, and they rapidly danced down the room together as though fired up by the observation.
Near the end of the show, Powlesland invited people to get up off their seats and follow her movements, they were now the puppets. Quite a few practically leapt out of their chairs and joined in with enthusiasm. Yet, I think one of the most memorable moments was when Fong said ‘do you think I’m going to sit on a chair and do nothing like you?’ and proceeded to give the most emotionally charged performance of the evening. Her movements became more aggressive and the tension that had been building up throughout finally came to a head. She shouted ‘I just want to get this out of my body!’ with an intensity that resonated. It’s the sort of frustration I think everyone can relate to; this sense of being trapped or being unable to feel totally uninhibited. It’s felt honest and that’s why it stuck with me.
The concept of the show for me was about breaking down barriers, not just between performer and audience but internal barriers too. It’s about trying to fully experience an emotion and letting it flow through your body without fear. However, there’s a conflict there because can you really achieve this if your are performing? It would interesting to ask Jo Fong and the other dancers whether they think they have ever had a moment of pure release while doing the show. We are constantly reminded that what we are watching is a construct while are also actively participating in forming the performance. Without the audience, the piece would not have been what it was but it can also adapt to whoever is watching. Thus we all become performers and like the three dancers, we are all in pursuit of freedom.
http://www.jofong.com/skills/audience/