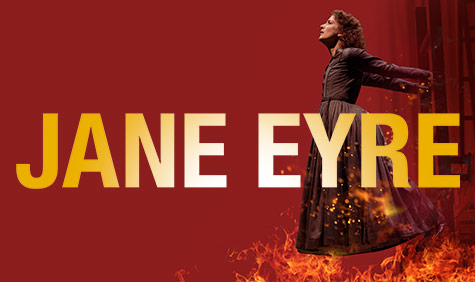 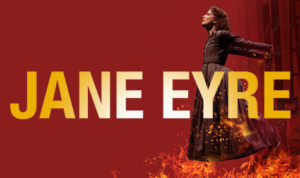 Jane Eyre is fearsome and blazing, with an inevitably symbolic of the plays presentation of temptation and restless desire, the audience succumb, engulfed by the ferocity of its cast and the boldness of Sally Cookson’s direction. 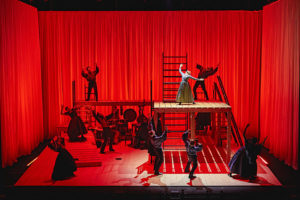 Amongst the haunting moors, trepidation is a state of being and, yet, our female heroine embodies its antithesis – fired by generational anguish, past and contemporary, Bronte – mediated by Cookson – defies the societal dismissal of the wholly feminine nature of yearning and discontent. The National Theatre’s ‘Jane Eyre’ is soaring and liberated, necessary as an, ever-contemporary, evolved feminist narrative.

Hope, within the play, is almost embodied as a metaphorical rejection of the play’s desolate and dire setting, in its weighted suppression, through the stark opposition of the cast’s spirited elevation and weightlessness. Through Jane’s experiences of; the people she meets, the places she sees, and that which she cannot understand, she is subjected to sinisterism and character-dimming corruption – preaching a passive dignity, in  favour of her (societally embedded) feminine duty – yet, ultimately love is professed as the only true salvation. Conflicting, in nature, as she is bound through desire, love liberates Jane as simultaneously she is chained to one man for all eternity. Ultimately pre-occupied by the pondering of existentially-defying love, I do wonder how the Bronte’s would respond to Love Island. 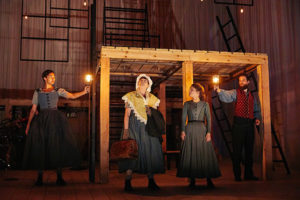 The solidity and grounding conveyed by the set band embodied an inevitability of Jane and Mr Rochester’s unity through an unbridled and innate devotion conveyed by the all-encompassing folk instrumental. Originated within, what was considered, the English ‘country’, in its expression of working-class tradition, custom and superstitions, it is mystifying and fiercely optimistic in wanderlust.
Michael Vale’s set design, earthy and raw, preaches and idolises childlike innocence, as the cast boundlessly throw and exert themselves to-and-fro the minimalistic tree house. In the pure and sanctified white sheets hanging to enmesh the space it is the projection of our own thoughts, the play’s narration and the immorality of the characters themselves which taint and stain the clean, preserved walls of the godly, proper, Victorian society that they abide to. 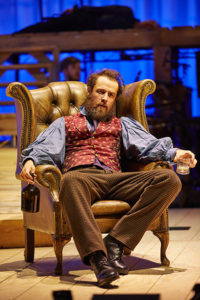 Dan Canham’s movement spurred and propelled its cast with agitation, injected spirit, yet, ultimately, underlined an active mistreatment and suppression of Jane Eyre. The production’s movement and instrumental accompaniment evoked and transpired a wanderlust and disquietude from Jane unto us as the continuous action pounding from the stage beat within my stomach.
The production’s frenetic energy combined with the haunting spectre of Melanie Marshall’s Bertha Mason, a raw, wretched and pitiful operatic presence, magnified the sparsity of the set, with its bare isolation that, arguably, embodies the desolate origins that drew, boundlessly, the souls of Jane and Mr. Rochester to clasp together. 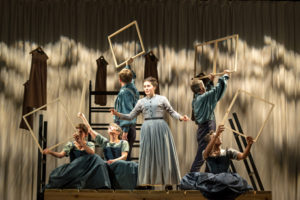 The halting, sharp scenes and the multitudinous use of rough sound gave the play the same raw emotion that categorises the book as such an elegant and unflinching exploration of the human heart. In the flurry, and succession, of such striking performances, the cast achieve flawlessness in their execution of truly turbulent multi-rolling with a rejoiced creative ferment. 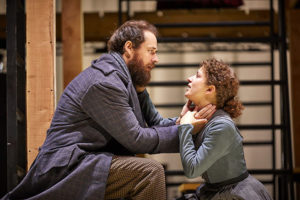 Nadia Clifford was a spectacle to behold brimming with the fever of Jane’s restlessness. Feisty and crumbling, neither over-bearing, Nadia created the unrelenting independence and the secret longing that characterises the eponymous heroine. Nadia’s portrayal allowed Jane to be flawed, multi-faceted in her complexity, to the extent, at which, exposing Mr Rochester as a truly rigid and canvased enigma of a man. Devastated and defeated, yet hopeful and triumphant, in equal measure, the National Theatre’s ‘Jane Eyre’ was stunning, shocking and soaring.