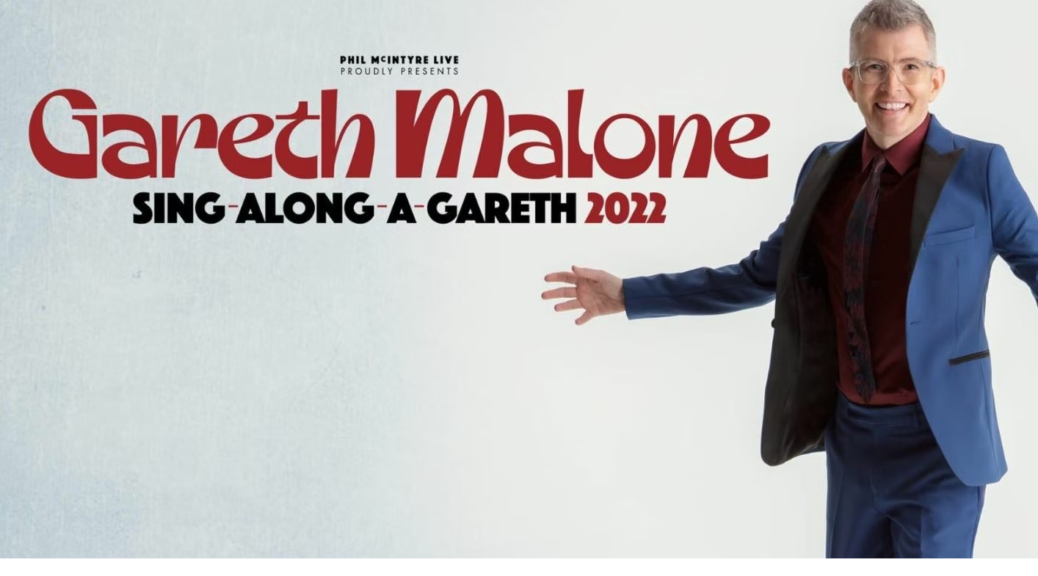 What follows is Richard Barber’s syndicated interview with Gareth Malone, who is touring his new Sing-Along-A-Gareth! show throughout the UK this autumn

He’s taken the Military Wives to the top of the charts. He’s had us all singing from our kitchens during the pandemic. Now the irrepressible Gareth Malone, choirmaster extraordinaire, will be spreading joy the length and breadth of the land together with his band, four professional singers and a choir, local to each venue, on a tour of Britain’s theatres.

Sing-Along-A-Gareth! (“I like the fact it’s got Gaga in the middle,” he says, with a smile) opens at The Lowry in Salford on October 26, taking in, among others, Liverpool, Cardiff, Bath, Norwich and London at the Cambridge Theatre on December 5, before coming to a rapturous climax in Poole on December 16.

“I’ve been involved in choirs for many years now,” says Gareth, “and then along came performance stuff on TV. But I’d never quite married the two together although, on previous tours, there was always audience participation, moments when I’d encourage people to join in with the singing.”

During the pandemic. singing was as good as banned. Then came the Great British Home Chorus which saw thousands of people around the country sing with Gareth from their kitchens, bedrooms and living rooms.  Every day at the same time, Gareth would bring joy through music into people’s homes reaching an average of 20,000 live viewers every rehearsal.

So, was a tour part of the plan? ‘I promised myself that once lockdown was over, I’d get back on the road and get out in front of audiences. I wanted to hear people singing again and to entertain them’.

As soon as he put the word out, he started receiving messages from people saying their whole choir would be there. “I love that. I see this tour as a celebration of people coming together after all those months of isolation. It’s certainly the first time for almost three years that I’ll have been on the road performing in public.”

The first half of the show will see Gareth, and a group of singers and musicians, perform songs he’s sung over the last fifteen years as well as some tracks he performed with the nation during lockdown. Playing piano, guitar and bass, Gareth will tap into the musical talents of the audience to write their own songs composing something special and unique to every venue. In Cardiff, it might be about Cardiff Bay.

The second half will see a local choir from each venue perform with Gareth, continuing the fun and bringing people together. Improving mental health, wellbeing and happiness, singing encourages a real sense of community, something that was so lacking during the pandemic. Gareth is happy to bring back that sense of togetherness with a feel-good evening of upbeat fun tracks we all know and love which everyone can easily sing along to.

He’s put together a song list, available now online, for the show. “I’m adding to it all the time but it’s guaranteed to include arrangements for some of those numbers people will be familiar with from Home Chorus.

So, what will audiences be singing?

“Elton John’s I’m Still Standing for its positive message,” he says, “and Walking On Sunshine by Katrina and the Waves for its joyful optimism.” There will also be Hey Jude (arm-waving obligatory) and Wake Me Up, the Avicii song sung by Gareth’s All Star Choir which topped the charts in 2014 when it became that year‘s Children In Need anthem.

“And I’d have to have Simon & Garfunkel’s Bridge Over Troubled Water.” Then, of course, there will always be a place for Wherever You Are, the song that propelled Gareth’s Military Wives choir to Number One at Christmas 2011, selling more than the rest of the Top 12 combined.

He’ll also be including Fields of Gold, made famous by Sting. “It’s a beautiful and uplifting song, a particular favourite of mine and with a quality that will resonate with everyone, in my opinion, particularly if they were to think of the loss of the Queen.

“I was sitting on the sofa a moment ago, playing it on my guitar, and it’s one of those songs that you can read in a number of ways. There’s a haunting quality to it, something that evokes memories, both happy and sad.”

From as far back as he can remember, he says, Gareth always wanted to do something a bit out of the ordinary with his life. His father worked in a bank; his mother was a civil servant. At secondary school, he grew increasingly enamoured of performing: in plays and orchestras and jazz bands and pop groups.

“Choir was like the background of my everyday life. I’d go in at ten past eight and we’d sing for about forty minutes every morning except Friday when there was a school assembly which I hated. That was seven years at a very formative stage.

“I wasn’t quite sure where any of it would lead. I did a drama degree but, when I came back from university, I realised that music was missing from my life. My epiphany came in a concert. I sang a note which seemed to reverberate off the rafters and, on the walk home, I made up my mind I was going to be a professional musician.”

At the London Symphony Orchestra, he ran a number of educational workshops. When someone said they were starting a community choir and would he like to run it, he didn’t need to be asked twice. “In the end, I ran two choirs: one for adults, one for children.” It’s how he came to the attention of the BBC. “And that’s how Gareth Malone, choirmaster, was born.”

He’s a natural performer, something that was traced back to his mother’s father, Teddy, when Gareth was the subject of BBC1’s Who Do You Think You Are?. “My grandfather was the sort of man who’d dance round the lawn in his underpants to make everyone laugh.”

In much the same way, Gareth enjoys working with an audience. “On this upcoming tour, I’ll be encouraging people to help me make up a song about their local town or city. So, in Bristol, it might be something to do with Isambard Kingdom Brunel. I like that interaction, the sense that you’re taking the crowd with you.

“The nice thing about a tour is that, if the lights went out, I’ve got my guitar so I could sit at the front of the stage and we could all sing a song together. It’s organic. I love the immediacy of a live audience.

“But I couldn’t possibly have predicted that, one day, I’d be going on tour, for instance, and filling theatres with people singing at my behest. I’m doing what I really love. I’ve been very, very lucky.”

The only possible downside in a life of wraparound music is that, nine years ago, Gareth was diagnosed with tinnitus. “I had an ear infection in 2013 which left me with a ringing in my right ear. But I’m lucky in that it’s not hearing loss and lucky, too, that’s it’s very mild – like a high-pitched whistle in one ear – because it can be very isolating and, at its worst, send you round the twist.

“Plenty of people respond to music that’s bone-shakingly loud. Not me. I look after my hearing. There’s been no degeneration in my hearing for some years now. And, given what I do for a living, that’s got to be a good thing.”

Recently, Gareth had special ear moulds made that let in the good sounds, as he puts it, and keep out the dangerous frequencies. “I wore them to a gig recently and it was such a nice experience.

“I shall be conscious of that on the tour. For me, volume does not equal quality. You can be moved by two recorders being played without amplification in the Barbican hall, for instance. It can be rhythmical and intense and it can still excite your brain which is where all music happens.”

But isn’t Sing-Along-A-Gareth! going to be a rather noisy affair? “No, it won’t be damagingly loud. A thousand people singing along together needn’t be deafening although a lot of people clapping really loudly can test me to the limit. So, no one should be put off if they see me putting my fingers in my ears.”

He skids to a halt, quickly adding: “Not that I’m discouraging applause, of course.”