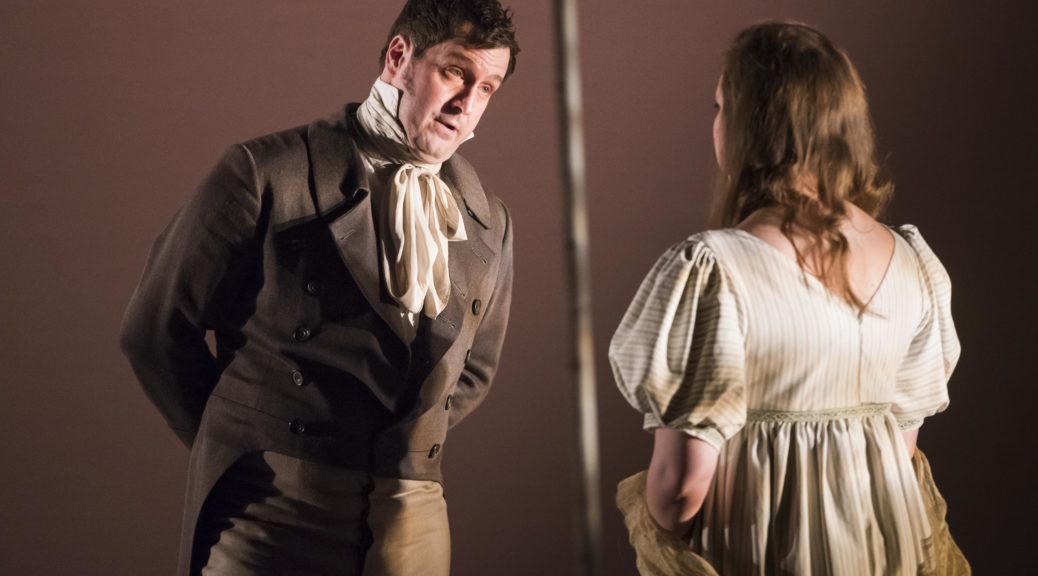 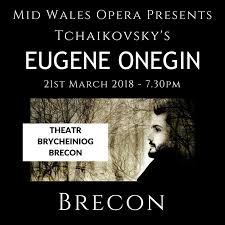 Mid-Wales Opera’s Eugene Onegin is a hugely commendable effort that provides quality singing to venues that are not usually associated with opera productions.

Putting on opera is an expensive operation and that invariably results in high ticket prices to compensate for it. In order to make it financially viable, then productions are usually found in major cities and at dedicated venues such as Glyndebourne and Bayreuth.

Tchkaikovsky’s Eugene Onegin is an opera based upon Alexander Pushkin’s  verse novel. Unusually, Tchaikovsky wrote most of the libretto in addition to the music and managed to retain much of the poetic nature of this great Russian work. The opera is highly esteemed within Russia bringing out the nationalistic quality of the nation in both literature and music.

The story is quite simple. A pretty rustic girl Tatyana, whose family are landowners, is introduced to Eugene Onegin, a pompous and haughty young man, whose friend Lensky is betrothed to her sister Olga. Tatyana is immediately attracted to Onegin and later that evening writes an impassioned letter to him outlining her feelings.  This has a negative effect on Onegin who informs Tatyana that her passions have been met by a stony heart.

Later, Onegin and Olga flirt openly to tease Lensky, but take it too far, with the result that the affronted lover challenges his great friend to a duel at dawn the next day. This is accepted and the two act out their ritual resulting in the demise of Lensky.

Five years pass, and at a magnificent ball in St. Petersburg, Onegin notices the now sophisticated Tatyana on the arm of Prince Gremin whom she has married. Onegin is struck by her beauty and grace and tells Tatyana that he had made a huge mistake in rejecting her previously, and expresses his love for her. Tatyana, admits that she still loves Onegin, but will not leave her husband thereby honouring her commitment to her marriage.  Onegin is left in abject despair realising that he has forever lost his true love and feeling the guilt of killing his best friend.

Pushkin’s work would have been well known to Russians, which is why  Eugene Onegin is not described as an opera per se, but as Lyric Scenes in three acts and seven scenes. Although the text would generally follow the source, departures from it are made but as the story is so well known it wouldn’t greatly matter and the lyric scenes would act as a reminder.

Eugene Onegin was first performed in Moscow in 1879.

Naturally, when working within a shoestring budget, compromises have to be made. The design sets in this production are rather bland and do not convey any feeling of it being Russian in essence either in the rural setting nor, by contrast, showing the opulence of the St. Petersburg in-crowd. In fact, in the final act which is set at a ball within the house of a rich Russian nobleman, and is supposed to be a sea of light,  only three rather undernourished candelabras are on display.  The only scene that works in terms of design is that which depicts the duel that has a silvery look and together with the dry ice conjours up a feeling of dawn. The  peacefulness of that time of the day being interrupted by the devastating sound and consequences of gunfire is well realised.

Tatyana is played by young British soprano Elizabeth Karani. It is refreshing to see young artists playing characters of roughly their age throughout this production. No need to apply copious amounts of makeup on display w hen mature “big names” take on the role of youthful protagonists way beyond their age, resembling something akin to a character out of traditional Chinese opera. Ms Karani is at her best during her lengthy letter scene in scene to of act one. She portrays the passion that Tatyana is expressing in her letter to Onegin with both power in her singing and movement in her acting.

British baritone George von Bergen plays Eugene Onegin. He sings well enough but in portraying Onegin as a stiff-necked haughty individual, he comes across as being wooden. Maybe the direction is at fault here.  His head is so much up his own backside, it is difficult to envisage Tatyana falling for him at first sight.  It is not surprising therefore that he says that Lenska is his only close friend. In the final scene, he does show his passion in a memorable duet with Karani’s Tatyana and it is a pity that he doesn’t show his evident acting ability prior to that. I feel there is a need to readdress the balance on how von Bergen portrays Onegin, who, after all, is the central character of the opera.

The supporting cast and chorus are excellent.  Welsh bass Sion Goronwy as Prince Gremin, received the greatest applause of the performance for his  aria comending the virtues of Tatyana, his wife to his old friend Onegin. Tenor Robyn Lyn Evans as Lensky sings a sad aria “Shall I survive the day that’s dawning?” with great pathos and regret prior to his fateful duel with Onegin.

Music provided by Ensemble Cymru under the baton of Jonathan Lyness, play well but again are subject to the production constraints, which limits their size and consequently the sound produced. Tchaikovsky is one of the great Romantic Classical composers and the orchestra associated with this genre demands a weighty brass and wind section which had to be matched by a corresponding number of players in the string section.   There are times here I think the sound produced is a little unbalanced with the wind section in particular, overpowering  the string section.

Despite my quibbles, one can only commend the ambition and enterprise of Mid-Wales Opera in bringing this work to venues such as my hometown of Brecon. There is a huge amount to admire in this production and the ticket price is so low for an ensemble cast of this size and quality,  it is a minor miracle in itself. It may not be Covent Garden or La Scala, but it is way better than I imagined it would be and I can endorse my support and look forward to the next Mid-Wales Opera production with great anticipation.