After attending the last Clear Cut, I was apprehensive that its relocation to The Globe would negate a little of the intimacy it held in the tightly packed gallery space at MADE. Where the audience, sat at the knees of the performers, were close enough to catch every facial tic and viscera of emotion. Yet, by the end of the night, moving shoulder to shoulder with strangers on a makeshift dance floor, I felt the familiar sense of closeness. The new, rather more auspicious, platform, rather than forcing distance, allowed the artists to explore and subvert traditional space through both their work, and proximity.

Without introduction, two female voices, disjointed and distanced by static, swelled through the darkness. On a continual loop, the cycle of barely discernible phrases and jarring feedback quickly superseded the instinctive need to distinguish language and became a haunting norm, as if it were the voice of the space itself. Heightening the tension, paper aeroplanes poured down from above, which revealed, when unfolded, texts that were as tangled and mired in themselves as the surrounding soundscape. The experience was displacing, emphasised when the performer stepped into, through and over the audience, speaking into a megaphone, becoming the physical manifestation of the voices that both invited and rejected the act of listening, participation and belonging. 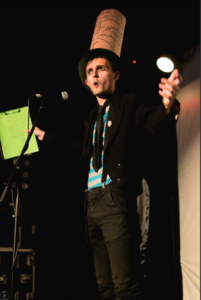 The exploration of our transformative interactions space, whether physical, mental or negative, was articulated most convincingly by the poetry of Rosie Bufton. Her intimate portrayal of the truncating nature of prison, stemming from her work with inmates, details the devastation inherent in incarceration. The reality of the lives laid to waste in the “concrete womb,” are made apparent by her references to fathers, brothers and men, that without the possibility of a future, are left to languish inside the structure of the poem, even after we had finished listening. Bufton moved from the physical prisons, to the abstract, but no less damaging, emotional and mental prisons that are built by trauma, and policed by us. Moving and relatable, Bufton urges that despite how trapped we may feel inside our own minds, at least with self-agency, there is hope for breaking free. 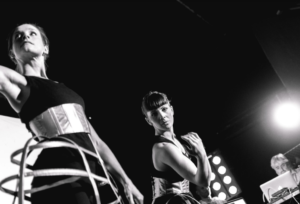 Turning Worlds, a complex, multi-disciplinary, and ultimately, beautiful performance – both visually and sonically – was so layered upon completion that it almost defies summary. Exploring and deconstructing the stiff structure of formal, and specifically, courtly, dance, Turning Worlds related the subversion of free and fluid movement to a revolt in wider society. The combination of music, spoken word, technology, video and dance worked in perfect symbiosis, culminating in something fresh, exciting and not to be missed.

The similar physicality of Livia Frankish’s clarinet performance of Three Ephemera posed, and answered, the question of how much a performer can give to a pre-constructed piece of work. Watching Frankish lean into her instrument, her chest ebb, her shoulders rise, her face articulating the emotion in each note, the act of creation appeared so intimate I felt voyeuristic watching. With a surprising amount of comedy she exaggerated the toll the piece takes physically to play, eventually superseding the voice of the clarinet with her own, almost tantrum like crescendo of notes, asserting the creativity and control of her interpretation. 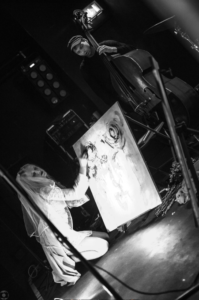 A Leap of Faith

Artist Robyn Hobbs took to the stage in what I described in my notes as a “dope ass Mrs Rotherham outfit”. With a heavily outlined nine-yard stare, the collaborative team of artist and band, lead by Ben Thomas, engaged in an elaborate call and response. Hobbs moved from frenetically painting, to enacting a progression of symbols and allegories that turned in tone with the seamless transitions of the music. The Leap of Faith alluded to by its various tropes, was sinister and wild in its expression, a literal and metaphorical precipice exemplified by the near edge of the stage. By the end, both band and artist declined into an entropic chaos, a stream of consciousness both verbal and aural that reflected a fall into a metaphysical madness, creating questions that lasted long after they departed the stage.

Particularly poignant was the collaborative dance and film based piece, Knots Cymylau. The film made visible the struggle of a body working through the trauma of mental illness. Heavy with the metaphor of its proximity to the cliffs edge, the camera work contrasted the vastness of the landscape, versus the macro shots of the body stretching and recoiling, emphasising the instability of identity anxiety with pulsating music and red screens. Especially when, perhaps unintentionally, it was followed by our compere’s poem, begun with repeated “shhhhs.” Reflecting the stigma that often dogs conversation of mental illness. 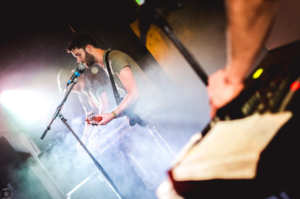 Finishing, was the atmospheric, complex and full-bodied music of Nevsky Perspective. Pure vocals looped over industrial beats in an intricately layered soundscape that built and built, until its full weight settled into some sort of profound sonic experience. The set acted, not as a song-by-song showcase, but as an experience in its entirety, moving from hauntingly delicate moments to room engulfing sounds. A slow, aural burn that demands, and is truly worth, your investment.
As ever, no Clear Cut event is ever fully complete without the inimitable Will Salter. The vast spectrum of adjectives I could use to describe his performances will always pale in comparison to seeing the man and his extraordinary enunciatory prowess. Acting as the vessel for a DaDa-ist entity, his guttural and phonetic utterances stretched out of his body in a way that seemed improbable, and, despite our human mouths not being nearly as gymnastic, managed to get the audience shouting along before the first act had even started.
Clear Cut OUT is a unique event that manages to be both magnificently curated, yet totally organic. Consistently constructing programmes that offer a diverse range of experimental performance art, Clear Cut is an accessible and entertaining entryway into the fringe of local and national talent.

Find out more about the event here: https://www.facebook.com/CardiffMADE/

Or have a taster here: https://www.youtube.com/watch?v=JeQJ4MaIVtU