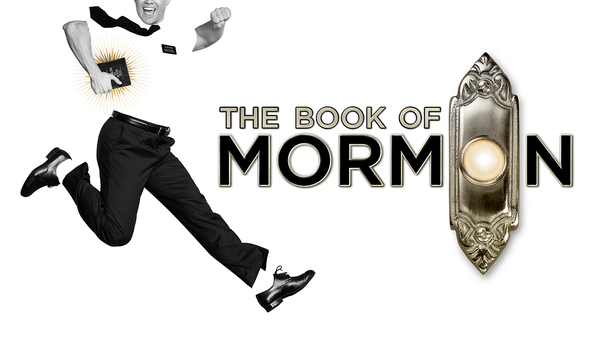 Originally due to play at Wales Millennium Centre in October 2020, the rescheduled Book of Mormon (BOM from herein) is just one of those musicals that you will either love or hate, there is no middle ground.

Having seen it in London in 2018, when tickets first went on sale for the Cardiff dates, I knew I wanted to see it again. Fast forward over two year later, I finally saw BOM on home territory – and it was also the first time back at WMC since January 2020 when Six was on tour there (25th January to be exact).

Having been to London over the last few weeks to see theatre again, and to have that feeling of live theatre, BOM was just the ticket!

If you’re not aware of BOM. It’s a musical comedy with music, lyrics, and book by Trey Parker, Robert Lopez, and Matt Stone (South Park & Frozen). It follows two Latter-day Saints missionaries as they attempt to preach the faith of the Church to the inhabitants of a remote Ugandan village.

Simple premise for a musical, I guess. The best way to describe it, is someone took a book of Musicals For Dummies, copied different musical ideas, used the comical genius behind South Park (not forgetting Robert Lopez who’s part of the team that have brought us Frozen & Coco), and you have one of the funniest & clever musicals of the last decade.

In saying that, this isn’t for everyone. The subject matter itself could be controversial, but I’ve another perspective. It’s not about one religion, it might be named after one, but the tone and material itself is about all religion, and the basis of it – a belief. It doesn’t say one religion is bad, and one is good, it just says your beliefs are yours – there are no wrong or right answers.

Performance wise, I’ve seen many touring productions at Wales Millennium Centre, and this one would probably be one the best I’ve seen – not just in Cardiff, but London and New York also. Sometimes touring productions can’t embed into a theatre for obvious timing reasons, but this one, with the set design, audio and overall casting is nigh on perfection!

Robert Colvin as Elder Price gives as good a performance as I’ve seen Josh Gad give (on Youtube I’ll add!), and Jordan Lee Davies as Elder Cunningham is more than match for Andrew Rannells in the original Broadway production. Aviva Tulley’s voice is just amazing as Nabalungi, and the ensemble were also pretty damn on point.

I’ve not reviewed anything in a long while – for obvious reasons – but maybe able to tell I liked this, and liked it a lot. I’ve never given any production I’ve reviewed a full house previously, but this is the one to change that. Maybe it’s the lack of live theatre over the last 18 months, but Book of Mormon is one to most certainly catch on its current UK tour – it also returns to the West End on November 15th!

Overall – I believe, Book of Mormon, is much better than any golden plates!