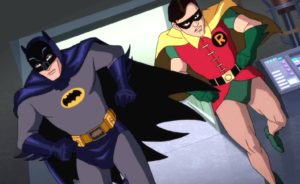 There was nothing quite like TV’s Batman in 1966 staring Adam West and Burt Ward. With its bold bright colours, dutch angles, lapse in logic, dedication to camp and ability to simultaneously produce silly and iconic images. It was something both of its time and enduring.

Now that the show has reached its 50th birthday and has more than stood the test of time it is being honoured with a full length animated feature film reuniting as many of the original cast as they can.

Our plot, well we actually get about three major plot points that lead to another, this is like four connected twenty minute episodes in one movie. Our opening is that The Joker, The Penguin, The Riddler and Catwoman have taken over a television show and are holding the place ransom. That’s all it takes for the caped crusaders, Batman and Robin, to leap into action.

One of the big promotional point’s of this movie is that they got three of the original cast back to play their roles that they did all those years ago. Even though its been fifty years, they all still sound good. Adam West has never really stopped being Batman, never being too far from the world, always dipping back in for cameos. Here once again he brings his totally unique speaking voice with dry wit, but also dignity without a hint on irony to these ludicrous lines and situation. Burt Ward is the real impressive part, still being able to semi-convincingly portray a young, energetic man despite being in his seventies. Last but not least, is Julie Newmar as Catwoman, more of a soft kitten, being a playful and teasing villain. The casting is a nice touch though if the actors weren’t up to scratch it could have become awkward, but they can still, after all these years bring all the loving touches to these characters.

All the original Villain actors have passed so their roles have to be filled by others doing impressions. Jeff Bergman handles The Joker and is right for most of it, however he perfectly capture Ceaser Romero’s laugh. William Slyers doesn’t capture the same tones that Burges Meredith brought to the role of The Penguin. Wally Wingert as The Riddler is the most consistent, capturing Frank Gorshin’s delivery and energy throughout.

The script and story-boarding is filled with references, there are all the things you expect, like the red phone, the Bat-Cave looks like it should and the wall-walking but throughout are some visual gags in the background or lines they say that refer to pieces of Batman material that would come out after this is set.

This movie works because the creators behind the scenes clearly know and love the material. They came knowing what made the show so endearing and also with a love of Batman’s universe so they put those in as well. They don’t try and reshape it to fit modern audiences they stay true to the source material. Also being that this is an animated movie it is not bound like the live action show was with its budget and practical effects, I wont spoil any of them for you except just say this one word, Bat-Rocket.

Though some scoff and critique it there is no denying that Batman 66′ is one of the most recognisable television shows to ever be made. It was a channeling of the absurd that the comic books were doing at the time and gave us a world like no other. Fifty years later and that world still has some of the most vibrant colours and funnest cast and most memorable moments that have ever existed.