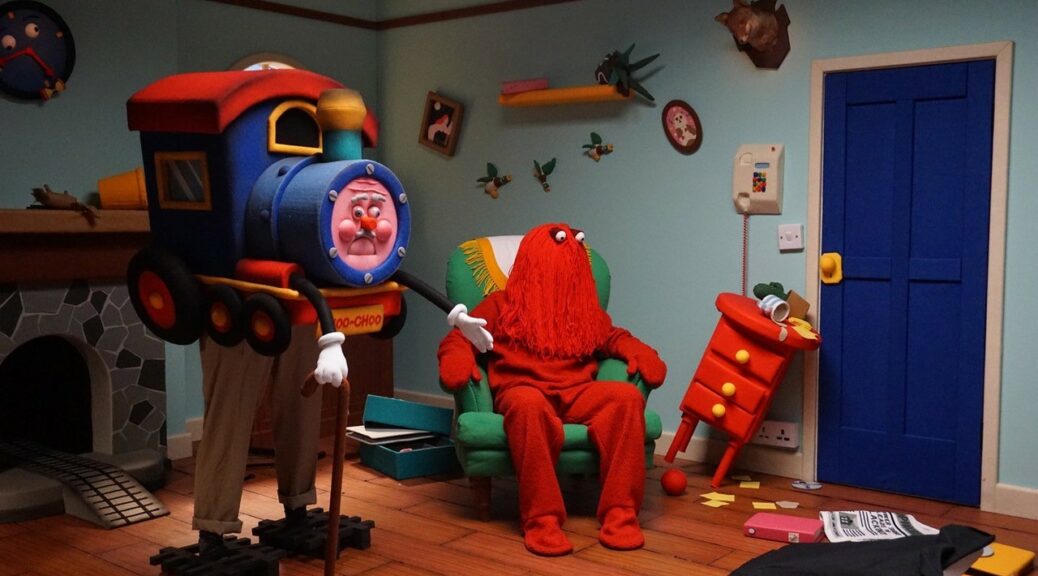 It’s been ten years since artists Rebecca Sloan and Joseph Pelling perplexed YouTube with their first offering of Don’t Hug Me I’m Scared. Through a huge cult following, they have finally broken through the interwebs and made it onto Channel 4. Though there is a varying success rate from this, DHMIS can proudly hold it’s place next to Bo Burnham and Smiling Friends, runaway hits with roots from the worlds biggest video site.

At first, I did wonder if it could reach the heights of its original form, with a delay of nearly two weeks just to be streamed on All 4. Things quickly got as twisted and disturbing as the episodes went on. Uncanny doll twins, creepy worm advocates and crusty old train men all feature to teach life lessons or just antagonise the three blissfully ignorant, lead puppets: Yellow Guy, Red Guy and of course…Duck.

I’m so proud of all involved in this. The funky songs almost reach the heights of the online counterpart, though the visuals are perhaps even more disgusting and disturbing. Much creativity is within these puppets, funny lines and the Theatre of Cruelty also fly by. Debates over the three characters and where they exactly reside still cause friction, is it a simulation or a nightmare? The show may try attempts to find answers, though never goes overboard with all its cards on the table. There are some genuine messages about friendship, death, grief, jobs, families and advice. Never pandering, only ever holding up a mirror to our own states of discord.

The show remains also very English. I think I detected a brief Welsh accent in the first episode, though this came and went. It is nice to hear some regional accents pop in and out. I think a few more voice actors could had added a bit more spirit to the array of dark and biting characters that feature. Baker Terry seems to set his net wide, filling in for a lot of the effort, as well as the creators. We can only assume the budget made things difficult. We’ve still yet to see the pilot which was presented at Sundance, something fans old and new alike would love to see.

To say too much would simply spoil the allure of the series. So drink in the rich flavours of Twin Peaks, Kafka, Wonder Showzen and Rainbow. Go forth and find the mysteries within…

Don’t Hug Me I’m Scared is streaming now on All 4 for free.