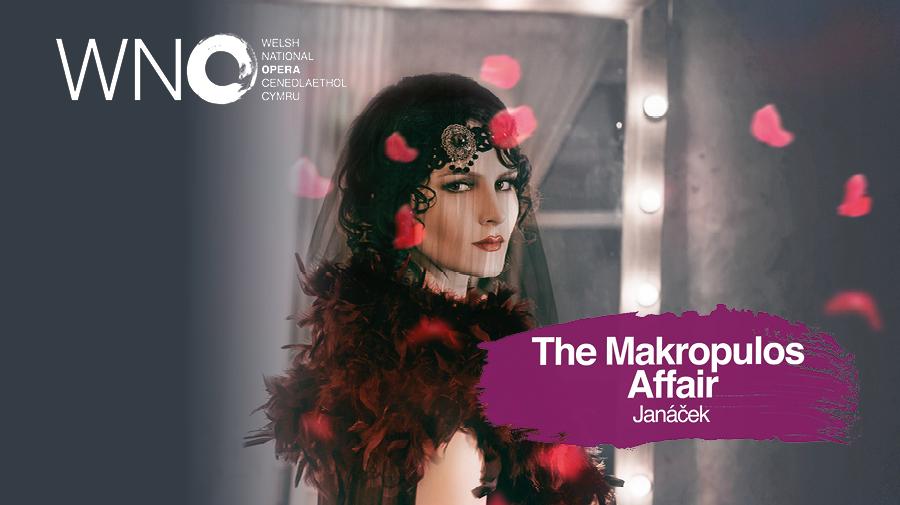 Having seen the various production of Janacek’s operas by Welsh National Opera (WNO) over many years, it is particularly thrilling to have the opportunity to see one unfamiliar to me – The Makropulos Affair.  On reading background about the plot and theme of the opera, it sounds remarkable, so it’s somewhat surprising that it doesn’t seem to be performed very often.  Olivia Fuchs’ new production for WNO rectifies this.

What does it feel like to have already been alive for over 300 years?  Clearly, none of us can know, but this is the premise of The Makropulos Affair.  Emilia Marty was born in 1585, and, by virtue of a potion devised by her father, has achieved immortality.  The recipe for the concoction was given to a Baron Joseph Ferdinand Prus in order that it be incorporated into his will.  But Emilia – true identity Elina Makropulos – now needs this formula if she wishes to live for a further 300.  It’s decision time.  Will she take the potion or accept her mortality?  But first a century-old battle over a will must be settled in order to secure the elusive recipe.

Act 1 opens in a solicitor’s office.  The paper-heavy nature of the business is deftly portrayed, with huge mountains of files everywhere, the feeling of depth created through the use of suspended paperwork as columns.  A sense of time and place comes via a video projection onto the back of the stage (credit to Sam Sharples), placing the action firmly in the 1920s and providing a reminder of the role of time via clock mechanisms and a metronome. Lighting is skilfully employed throughout, the muted hues ever changing to match the mood. Credit to Robbie Butler here.

Backstage at the opera house, Act II brings movement and colour, flamboyant red dominating throughout in the pile of roses left for Emilia Marty and her top-to-toe (including hair and necklace) outfit – it’s all or nothing with her.  Ice-cold Act III beautifully captures Emilia steely demeanour – combing her hair is of more interest than learning of Janek’s death.  The all-white set – outfit, bed, dressing table, suitcases – is in stark contract to the opulence of Act II and a fitting backdrop to the heightened drama and tension of the final scene. Designer Nicola Turner has done a fantastic job.

Keeping up with the various family relationships is challenging and the projection of the family tree onto the back of the stage at various points feels heavy handed, particularly in conjunction with reading the surtitles.  Better is the use of a comedic interlude between the first two Acts, in which the doctor seeks to explain matters (aided by a blackboard and easel).  I could almost hear a collective “at least it’s not just me” from the audience.

Angelas Blancas Gulin shines as Emilia Marty.  She manages to capture her guile, passion, torment, cruelty and coldness at various points throughout, and her soaring finale is captivating.  Nicky Spence as Albert Gregor is perfectly cast, frustrated throughout and, against his better judgment, falling for Emilia.  Dr Kolenaty’s role is taken by Gustav Belacek, his clipped tones ideal for conveying lawyerly detail and precision. Baron Jaroslav Prus is played by David Stout, tragic in the face of his son Janek’s suicide.   Credit must also go to Harriet Eyley (Krista) and Alexander Sprangue (Janek) who performed their small but not insignificant roles well.  Alan Oke takes the role of poor Count Hauk-Sendorf, played empathetically and with feeling.  Mark Le Brocq’s clear scene-setting at the beginning of the opera is welcome, given its (relative) complexity. Other roles were Julia Daramy-Williams (Chambermaid) and Monika Sawa (Cleaning Lady).

Conductor Tomas Hanus is at home here, veering from the terrifying to the beautifully melodic to the  tragic, and always providing a masterful lead.  The orchestra of WNO is as flawless as ever.  Long may this opera company’s warm relationship with the operas of Janacek continue.