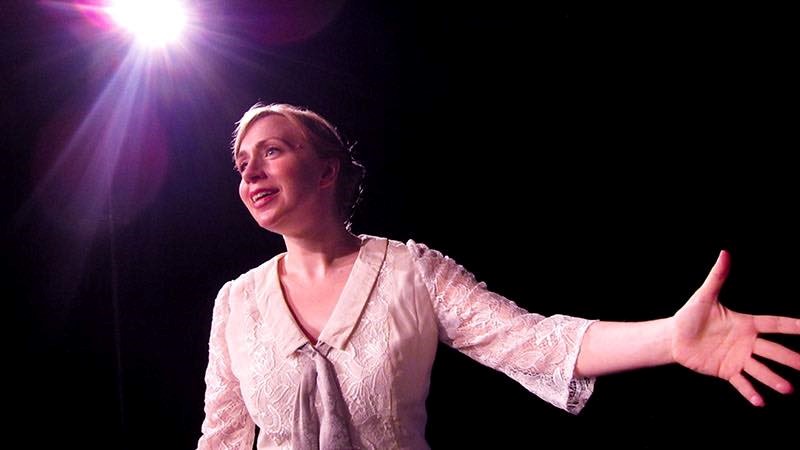 In Dyad Productions latest show, A Room of One’s Own, Virginia Woolf lives again. Almost a century old, Woolf’s words remain as apt and filled with fierce observations against the world around her. Her gender was used against her in many aspects of her life on an academic, personal and general perspective. Her pen tells her testament with a vivacious use of the craft.

In this no frills production, Dyad make the written words the focal point of this hour long piece. Rebecca Vaughan is a chameleon, her past endeavours proving her versatility. With much energy and gun-ho spirit, Vaughan has a good go at Woolf and it pays off. The lack of a set, makes for extra concentration purely on our performer and thankfully the show was not overtly long. It remains a fine thing to hear these words come to life again, staggering how we have changed so much as a nation, yet very little in other areas.

Woolf’s dry eye in her anecdotes are spiffy and amusing. She can easily recognise her privileges: class and status, yet call out other people for unbounded ignorance and sexism. There is no real feeling of hate in her words or from this performance, rather bewilderment and frustration at the opposite sex. Dates are pulled out of the air to remind the audience how only a few decades prior could a woman earn her own money. Many female writers of note are touched upon and even a fabricated examination of a sister of Shakespeare is under the scope.

Through it all, it remains the love of literature that seeps through. Writers always found ways around the systems they were confined in and Woolf was no different. With much respect to her, the staging simply pays homage to her passions and search of the truth through women’s suffrage.

A Room of One’s Own continues at Chapter Arts Centre till 18 Sept 2022, then on tour.

Female Gothic will be on at Chapter 7 & 8 November 2022, also on tour with Christmas Gothic.