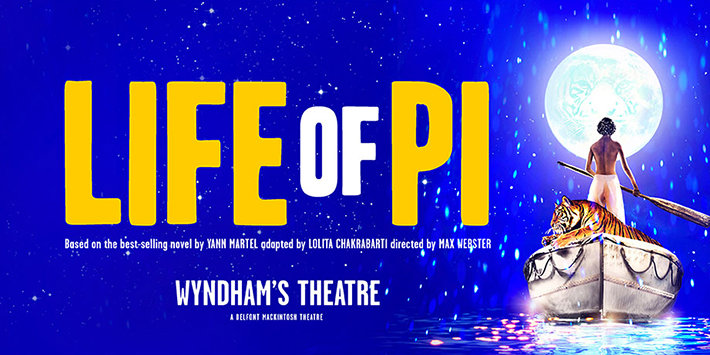 Spoiler – if I could give this production more than 5 stars, then I would. It has been a long time since I enjoyed and was so utterly transfixed by something as I was with Life of Pi.

Brought out in film form a few years ago, Life of Pi took Hollywood by storm with the interesting and unusual story of a boy who finds himself stranded on a boat, alone with a Tiger.

When I saw the film, I wasn’t as bowled over as everyone else seemed to be. My experience and reluctance was still in situ when I came to see Life of Pi but the promise of puppetry and somehow a boat on stage, made me want to see for myself.

Firstly – the performers were ah-mazing. The interaction and relationships between them was entirely believable, and if this wasn’t on a stage, you could easily believe the relationships that were performed. Each character was fully realised and even when they doubled up on characters, you forgot that you saw them as, say, the uncle beforehand. Costuming helped to some degree but the pure talent of the performers really sold it. The main character of Pi was hilarious and cheeky and such a likeable character. This made emotional parts of the story more intense with someone you like and want to look after. His cheekiness was everything a 17 year old boy would give and it pocketed itself in between the hard moments of turmoil.

The staging was magnificent – unlike anything I have seen before; the whole stage had points where the elements rose from nowhere, where Pi jumps through the stage shocking us, where it changes easily from a zoo, to a ship, to a boat, to a hospital room. Instead of painted set, the entire aesthetic was brought by light and projection – and this became innovative from typewriting style lettering to pin point the place and date, to a starry sky or fish swimming below the boat. This alone was immersive and transfixed me along with the narrative and performance.

And of course, the pièce de résistance, was the puppetry of the animals. From life size Zebras to small fish, the puppetry took on the same technique as debuted in War Horse – entirely believable, the little mannerisms and personalities of these animals came through with the flick of a tale or the twitch of an ear. The larger creatures featured the full bodies of puppeteers inside to help the movement and others helped with various maneuvering by others. But as amazing as these performers were, they were forgotten by the realness they brought across with movement of these puppets.

I will freely admit that I found myself in tears, not only at the narrative, but at the beauty of these puppets, as if they were real animals on stage. They were magnificent and entirely believable.

The less wholesome elements of the story, which features animals being eaten or blood and gore to some degree, is done extremely well and tastefully, using lighting, coloured fabric and ominous music to accompany. You cringe away as if it is real but part of you knows that it is only the well presented theatrics.

Life of Pi, whether you enjoyed the film or not, is one of the best things I have ever seen and is the ultimate must see in theatre. It is every part funny, emotional, awe-inspiring and beautiful. For a West End production, there is the gorgeous element of immersion with the beautiful stage design and the action is shocking and intense as the narrative is meant to be. This is a show I will never forget and have ever since, not stopped thinking about.