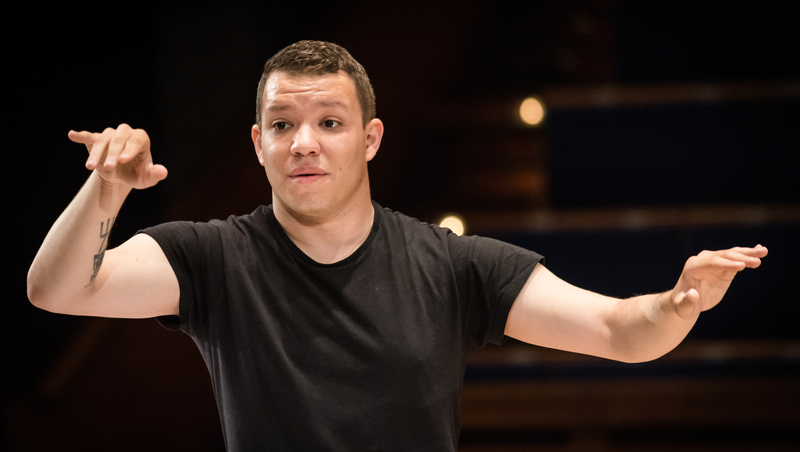 The future of music Welsh lies in events like this. BBC NOW have taken under their wings Wales’ budding composers for years and this reaches its zenith in the Composition: Wales workshops and concerts each year at Hoddinott Hall.

Several pieces were performed on the night and I will try and touch upon each one. Starting off with Haldon Evans and his Y Mynydd Du, we get a vivid depiction of famous Arthurian landscapes. You could feel the breeze, with Vaughn Williams and Britten as friends. The grand, old Welsh composer might just have more music to come. Sam Butler’s Stones Have Memory Here had a focus on time, with Cardiff Castle in mind and the centuries of masonry that lie within. This felt quite nondescript, something I would need to hear again to really drink in. Auburn Dusk from Jonathan Guy was an airy, folk like few minutes which held favour in this concert.

Leading things was the flamboyant Ryan Bancroft, who’s animation is always watchable and exciting. He lives the music in every bar. Tomos Owen Jones and his Daybreak from High House was a charming sign off from the Brecon Beacons, the composer here thinking of his new home and it’s place in the landscape. Nexus by Natalie Roe was an unassuming composition though filled with spice, seemingly venturing into suggestions of other music genres without ever crossing their thresholds. The jazz inspired Ascension by Jake Thorpe had none of the trappings of the genre and crossed over into a harsh encounter. Upper Structures by Jonathan Worsley held up as quite dense and dreamy, the last but one work on the programme. The feel of the theatre lies in BBC NOW’S clarinetist Lenny Sayers’ The Imaginary Carnival, proven by future promises of a staging. This felt like Petrushka hungover, yet the festive imagery was very clear and rowdy.

It is always a joy to hear the musicians play new music. BBC NOW should be proud.