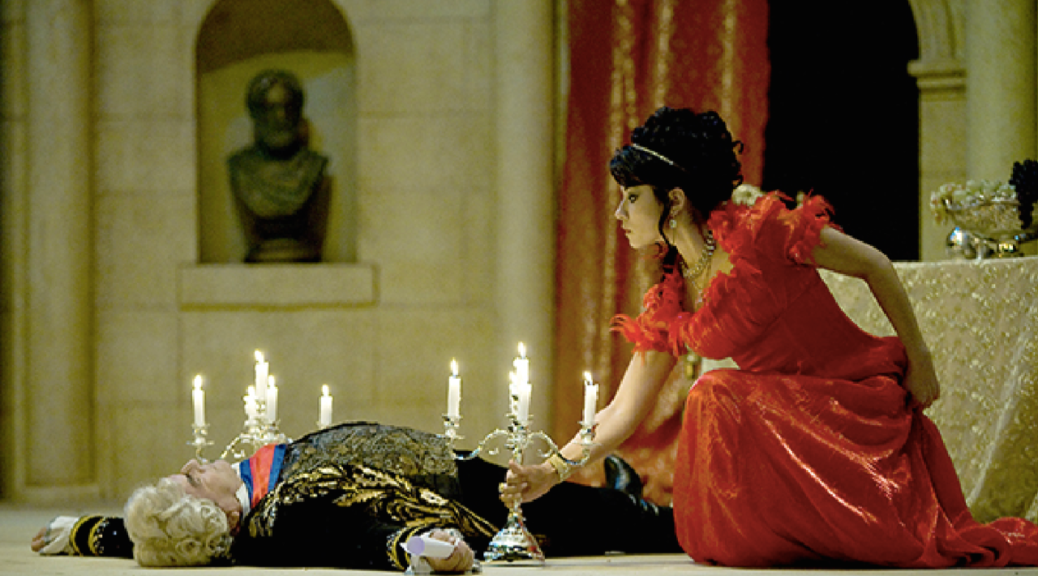 It was the Ellen Kent production of Madam Butterfly in 2020, that Cardiff would not be seeing. In a usual return, Tosca and Carmen would be back in the Welsh capital. I’ve seen Kent’s collaborative productions before, working extensively in eastern Europe, this recent venture a timely journey through the UK and Ireland with the Ukrainian National Opera of Kyiv.

Kent has truly done amazing work to introduce new audiences to opera since the early 90s. I’ll confess some of the marketing promises animals and water features, only to be present at a select venues. Though billed in the poster, we would not see any Royal Greyhounds in Cardiff, though there presence fleeting and a bit showy any. Maybe the appeal comes from seeing more traditional opera productions, most directors today awash in fanciful experimentation and warping of setting and costume.

This staging in St David’s Hall does not really impress. Some doors appear unpainted and undecorated, not ready for showing. Other gates should stay closed only to open again, breaking the mood of the final act prison scene. Tosca in one moment touched a pillar only for it to buckle again the wall. I’m thinking about the durability of these sets and probs knocking about the entire British Isles, though I feel a bit more work is needed. Stage hands arrive in tracksuits to hurl the furniture about, this ramshackle feel is never far away.

Having said this, the singing was just fine. Our Tosca is Elena Dee well armoured in the demanding prima donna role. Her famous aria is delivered with emotion and a well versed knowledge of Puccini’s vision. She shines well with the decent looking costumes, she parades through in the three acts. Her lover, Cavaradossi is here from Vitalii Liskovetskyi, another great venture. He is perfect for the role, a sweeping vocal line and tenderness are never far away. The villain Scarpia is Vladimir Dragos, who embodies the role with terror, a sexual predator who always gets what he wants. His downfall is always satisfying, mock booing is fair game at the curtain as Dragos comes out laughing. I remained unsure about the voice of Eugeniu Ganea as the escaped prisoner Angelotti, though this is a small role.

The subtitles above the stage could not always keep up with the drama. Conductor Nicolae Dohotaru held the tension throughout, though the orchestra may have had a little slip up here and there. For such a small orchestra they made a lot of noise and worked hard in the pit. Though I’m sure the tubular bells did not sound quite right. The chorus blasted out in the Te Deum, with Oliver Papadakis getting the pretty little solo as the Shepherd Boy.

Expectedly, the night ended with a rousing rendition of the Ukrainian anthem. Dee looked stoic here holding up the flag with Liskovetskyi, with some of the chorus wiping away tears. A touching moment, made all the more real for this opera company who’s thoughts are with home.

Tosca continues on tour with Carmen and Madam Butterfly.