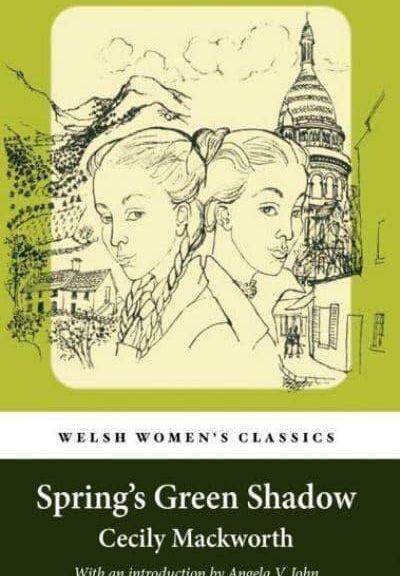 One of the latest additions to the Welsh Women’s Classics series published by Honno Welsh Women’s Press, Spring’s Green Shadow is a novel based on a true story – that of the author herself.  Cecily Mackworth, born in the early years of the twentieth century, (1911) was a journalist, author, and poet born and brought up in Wales who later lived in Paris during a period of political turbulence.

First published in 1952, set in both Wales and Paris, this new edition of Mackworth’s novel has a lengthy introduction by historian and biographer Angela John, an honorary professor of Swansea University.

And thereby lies the rub, for worthy and meticulous in detail as is John’s introduction, it also to some extent gives the game away.  In many respects, Cecily Mackworth’s own story can be seen as similar to that of the novel’s fictional heroine, Laura Gethryn. However, any sense of deja vue is justified giving as it does the raison d’ȇtre of the novel.

As the story opens the reader is introduced to Laura, the intellectually inclined and high-spirited daughter of a father left broken and emasculated by the first World War and a mother, made demanding and bad tempered by events.  The early years of Laura’s life are spent living with her parents in Monmouthshire where her father’s family have been landowners for many generations. Continually berated by her parents for not conforming to the dictates of the time regarding a woman’s role in life and a daughter’s duty – i.e.to make a good marriage – Laura’s frustration erupts into action when she comes under the influence of the working-class intellectual Mr Howells. Rebelling against her mother’s refusal to allow her to pursue her education, Laura escapes to begin a new life with the Howells family

The focus on woman’s emancipation gives a contemporary feel to this novel, despite it being evocative of a bygone era.  Mackworth’s brilliant descriptive powers give a vivid and at times uncomfortable portrayal of life as it was back in the early part of the twentieth century for an ambitious woman writer determined to bring some unpleasant truths to the notice of the powers that be.

While it has to be said that this part of her book is to a degree biographical, giving as it does a close resemblance to Mackworth’s own experiences as a woman who was herself involved in at times dangerous confrontations regarding a number of controversial issues., it is none the worse for doing so.

Not only is Spring’s Green Shadow an interesting read in its own right as a novel, it has the additional benefit of historical worth, documenting as it does the mores of an era in which long-held beliefs both at home and abroad were questioned as the winds of change blew over Europe.