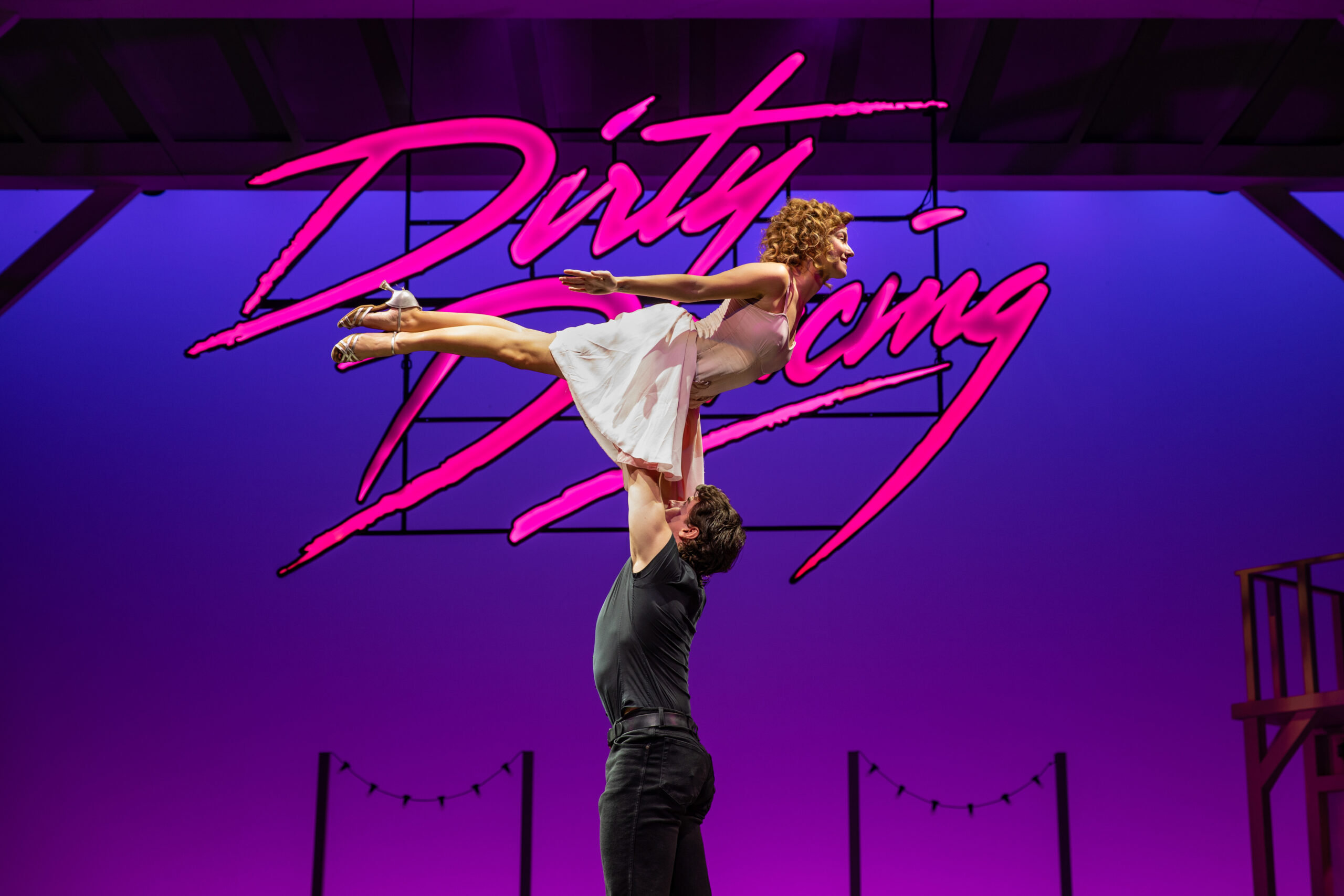 I once went to a shop, bought a watermelon, uttered the infamous line “I carried a watermelon” to receive from the cashier “…Isn’t that from a film?”.

We all know Dirty Dancing. A quintessential love story from the 80’s. Based in the 1960’s, this coming of age story sees teenagers growing up in this time, breaking out of the post war /post 1950’s prudeness and traditions and embracing life, sex, culture. They are becoming more aware of socio and political climates, and women are becoming more vocal and independent. This is when Baby, with her family, spends time at their holiday resort (think American Butlins) and when she leaves 3 weeks later, she has grown from daughter to woman, after meeting Johnny and together, facing a mountain of challenges and issues. Baby’s world is cut open and she soon grows up.

Firstly, I would say that calling this a musical is a little misidentified. Yes, there is music; yes, there is dancing; but very little in singing. Most of the music is pre-recorded. There is the occasional band playing, maybe 3-4 songs sung on stage but other than that, it’s very much like the film; lots of talk and lots of dance. Don’t get me wrong, the dancing is BRILLIANT. Carlie Milner (Penny) has the most envious of techniques, along with Michael O’Reilly (Johnny) who epitomises Patrick Swayze and his snake hips. Together, you can believe they are the envious duo that smashes into the campsite scene. Kira Malou (Baby) also does a great job at performing as if she cannot dance, to slowly building up to being worthy of Johnny’s partnership. But it did feel as if she wasn’t given much stage time to really showcase her skills, until the very end in the encore.

The music is typically 80’s – we know all the songs and sing along, and this does pick it up in enjoyment. There’s more comedy added than the film, and the performers do well to be hammed up enough to be these stereotyped characters supporting; it allows the depths of Johnny to be shown in more detail. The whole cast is so in sync that you wouldn’t quite believe that this was a press night – such perfection in movements, in synergy and in the graceful scene changes and line delivery.

The director for sure knows what they are doing; likely, a show catered for the Millennial and Baby Boomer female audiences, there’s absolutely no hesitation in ensuring that Johnny is swooned over. He is quiet, brooding and tormented, just as we expect from Swayze’s original character, and maybe more muscular. It isn’t until he strips off his top and an accidental bum flash and I think most of the audience had collapsed. As a hot blooded woman, yes it is enjoyable to see, but it also feels quite seedy and thrown in – and I couldn’t help but feel sorry for O’Reilly and the objectification.

What also did not sit right with me was the issue of race. Rightfully so, the cast is a mix of races, which is great to see when theatre and musical theatre especially can be so white, middle class and cis. However, to showcase Baby’s growing independence and outspokeness, the issue of race in America at the time, Martin Luther King, and even the word “Negro” are thrown in. It isn’t developed upon and unfortunately feels uncomfortable, badly placed as well as fueling white savior syndrome. With a number of persons of colour in the cast, I’m sure if this didn’t sit right then I’d hope they would speak up, but to an audience member, it only felt like it was there to show Baby breaking away from tradition and not making a important point about race and history. My memory of this in the film is hazy (and that in itself probably shows a further issue of the original film and their take on this) but even if it was featured in the same way, this is where we, as a reprise to stage, can change this and either fully and completely bring that story to light or not at all. Baby’s independence can be shown in other ways, other than her being the person to speak for a race that is not her own. I also felt it limits the casting process – can a person of colour therefore play the role of Baby or Johnny or any of the other characters? The whiteness of the characters isn’t a point of the narrative in the stage production, as it is in the film with the camp being of Jewish-American tradition, so why limit the casting!? Argument would say that as Baby is Jewish-American, she is part of a minority and can speak but as this isn’t eluded to or even distinguished, I do not feel that there is an argument there.

Dirty Dancing is not what I’d exactly call a musical, but it is good fun nonetheless. Fans of the movie and of 80’s music will be happy to attend for a light-hearted take on this well known tale, with a pink wine in hand and a dance at the end, along with times to swoon, the famous lift and “Nobody puts Baby in a corner”. However, there is a huge conflict of messages throughout and some uncomfortable areas that are never really realised and could probably have done without.