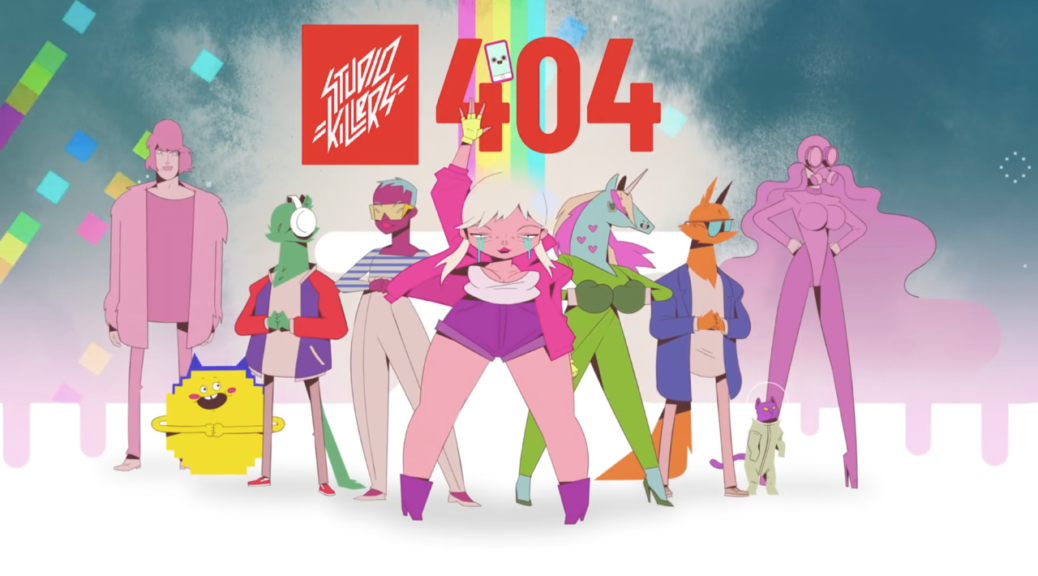 Truly a group who have gone under the radar, Studio Killers have made some banger club tracks and also embraced some of the mystery surrounding them. Cherry, their lead “singer” is loud and proud, unashamedly herself. Watching this figure in songs like Ode to the Bouncer and Eros & Apollo, you can only fall in love this this outrageous CGI heroine, who seems to get herself in all sorts of trouble. In short, she’s your toxic friend with a heart.

With this cult success under their belt, a Kickstarter raising nearly £130,000 went towards an animated pilot, now finally for all adult eyes to watch. The name 404 is a wink to the error number which infuriates anyone unsuccessfully attempting to get on a website. The premise seems to be that the band are stuck in an internet realm which rules supreme. This is a world where people can be banished by the algorithm and hearts sent to people powers up their strength. Basically just real life, with more advanced technology. This pilot packs a lot into its mere 11 minutes and some things are missed upon the first watch. Some inside jokes about bands having a break and some meta humour help flavour the already multi-coloured pot. I’d like to think this group are well aware that they might not be getting the recognition they truly deserve.

The script is not as funny as it’s trying to be, some of the line delivery and quips don’t quite hit the mark. Many jokes about feminism and toxic masculinity have been done much better in the past, as the characters are thrust into Planet Jeff in the Reddit System (groan). One joke about their missing manager called Bi-Polar Bear harks back to an old internet cartoon called Queer Duck with a character bearing the same name. You get the vibe of Adventure Time, The Yellow Submarine, Daria and a touch of Sci-Fi to boot. Their are multiple cliches, though I find the animation endearing, with its minimal, stylistic lines. Some of the mouth flaps for the characters are not in sync either. That will need work.

There are some highlights. Cherry prepping for her Style Battle is a brief moment of dazzling fashion and visuals. Pornica, a fine villain to the plot, is a giant gas mask wearing dominatrix with hair that seems to waft like fumes. Grey Griffin is always swell in everything she’s in and here saves a lot of the other inconsistencies. Her design is my favourite part of the show and I hope she isn’t just a one demential baddie. Though Cherry’s voice has been drastically changed (it was originally an English accent and believed to be voiced by a man) though Hayley Marie Norman does a fine job, some delivery particularly well executed. Also voicing Cherry’s love interest Jenny (how could we forget her from her own song?) is hopefully not just a lone POC for the series, some nice lines here and there and hopefully more chemistry will develop between them both. Thankfully, the anthropomorphic animals (Goldie Foxx and Dyna Mink to name a few) in the group still keep their English accents, with varying degrees of effectiveness.

For a pilot it is a fine effort but its flaws need seeing to. Of course, I’m here for the journey and I look forward to watching more.