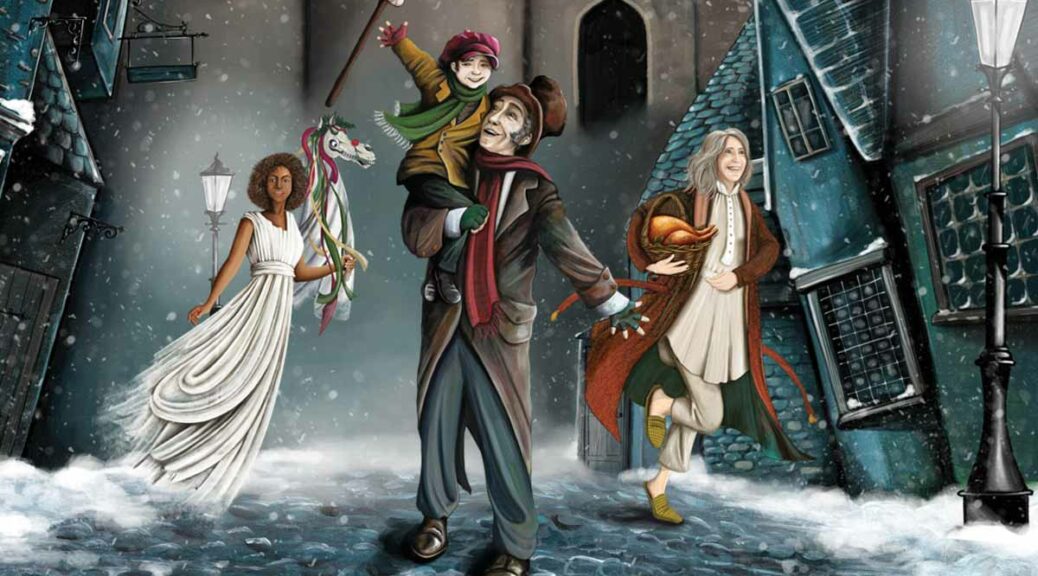 It’s Christmastime again at the Sherman, and after 18 months, they’re back – both in the studio and at the cutting edge of theatre. Their ‘Back in Play’ season brought us the stage, and their new version of Charles Dickens’ festive classic has brought us the spectacle. The first full-length production directed by Sherman AD Joe Murphy at the Theatre itself, and adapted by award-winning playwright Gary Owen, A Christmas Carol is led by an exceptionally skilled ensemble of actor musicians who perfectly capture the magic of the original tale with an added Welsh twist.

It’s hard to convey how impressive a cast this is, swapping effortlessly between characters, costumes and instruments, and collaboratively weaving a gorgeous tapestry of this much-beloved story of a miser who learns to see the error of his ways. Collaboration is the key to the Sherman’s very particular magic – as with every Made at Sherman production, A Christmas Carol was constructed in its entirety under the Sherman’s roof in the self-proclaimed Heart of Cardiff. And it is a Heart which is worn very deliberately on this production’s sleeve: Newtown, Riverside and Splott all get a mention (it’s even subtitled ‘Miracle on St Mary Street’), and Welsh-language lullabies and folk songs evoke a poignant sense of history and place. Its Cardiff setting is one of the two key things which set this version apart from any other; the second is that this Ebenezer Scrooge is a woman, superbly played by Hannah McPake.

McPake’s Scrooge is a glowering menace sketched with shades of Malcolm Tucker, but with a swagger and style that is distinctly and deliciously her own. To be alternately horrifying and hilarious is a feat few have ever accomplished, and none quite as brilliantly as McPake does here. The piece requires a lot from her over the 2+ hours runtime but McPake, a stalwart of Sherman Christmas shows like The Wind in the Willows and Alice in Wonderland, takes it all in her masterful stride.

Her interactions with the ghosts are especially entertaining, not least with Keiron Self as Jacob Marley, a Michael Sheen-ian master of ceremonies who deftly guides the audience through the story. Singer-songwriter and actor Kizzy Crawford brings an ethereal grace and otherworldliness to the Ghost of Christmas Past in her Sherman stage debut. How To Win Against History’s Seiriol Davies as the Ghost of Christmas Present is truly a gift in every sense of the word and has, as far as I’m concerned, created a new festive tradition: performing Pink’s ‘Get the Party Started’ whilst dressed as a glamorous Christmas tree. (I will never look at baubles the same way again). And when the Ghost of Christmas Yet to Come made its appearance, I audibly gasped.

The ensemble is rounded out by James Ifan as Scrooge’s sweetheart, Beau; Emmy Stonelake as the gregarious Fezziwig, Mrs Cratchit and more; and Nadia Wyn Abouayen, in her professional stage debut, who plays almost everyone else, from Scrooge’s Mother to Tiny Tim. While Scrooge is Cratchit’s (Feliks Mathur) tormenter, Mathur also plays a very different kind of ghost from Scrooge’s past, cleverly turning the tables on their victim-aggressor dynamic. Last but certainly not least, Apprentice Actor Enfys Clara, who headed the Youth Theatre’s pre-lockdown production of The It in Spring 2020 and features here in multiple roles, looks to have a promising career ahead of her on the stage.

The trip through Scrooge’s past dredges up not only ghosts but demons, though Murphy’s tactile and tactful direction artfully guides us through the emotional twists and turns. Owen’s thoughtful update focuses on the origin of Scrooge’s cruelty, adding a meaningful explanation for the character’s ruthless drive to make money and scorn those without it. This and several other additions wonderfully enhance the original tale – it’s no wonder that Owen (Iphigenia in Splott, Killology) is one of Wales’ best loved playwrights.

His adaptation is brought to life by a cast and creative team that have spun nothing short of magic. Lucy Rivers composes a musical deserving of the silver screen while Rachael Canning’s puppetry casts the kind of spell that’s only possible on the stage. Whenever I make a dramatic entrance in future – and, believe me, I will – I would like Andy Pike to light me as spectacularly as he does the cast here (McPake’s silhouetted introduction took my breath away). And Hayley Grindle’s strikingly gorgeous set makes you feel like you’re walking into a storybook.

A Christmas Carol has captured audiences for over 170 years. It endures because it proves that the worst of us can be redeemed, that hope can blossom from despair, and that love is the why and the how of all things. The Sherman Theatre’s wonderful adaptation of this timeless tale is easily one of the best things I’ve ever seen in the theatre: charming, hilarious and heart-warming, it’s a perfect Christmas treat for the whole family.

The Sherman Theatre will also be presenting a production of The Elves and the Shoemaker / Y Coblynnod a’r Crydd a show for younger audiences, with separate performances in Welsh and English.