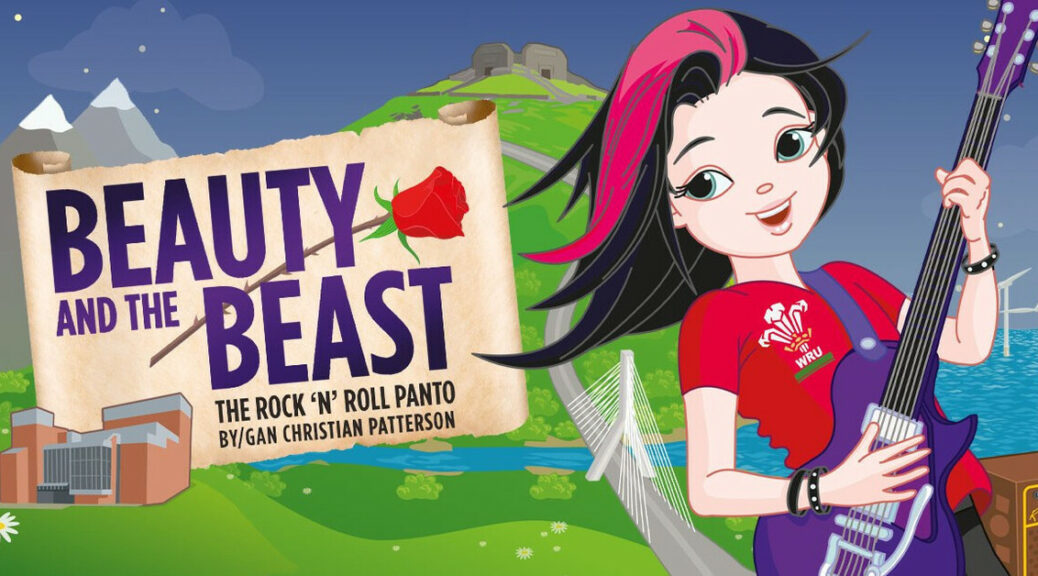 After over a year of auditoriums sitting dark and empty due to a worldwide pandemic that almost left the industry in tatters, it was all the more poignant and I felt all the more appreciative to be able to attend, for me, the jewel in Theatr Clwyd’s crown, its annual rock ‘n’ roll pantomime, this year it was the turn of Beauty and the Beast!

Upon entering the auditorium, we are greeted with a partly open stage where it becomes clear that the band will be on view throughout the show. However, once the action begins, we see that the cast, are in fact, also the band! Belle goes from sitting on her swing, reading a book to grabbing a guitar, her spoilt sisters Stacey and Nessa flit between hilarious comedy skits to playing keyboards and in a surreal twist we see the Beast rocking out on the drums! The small cast are constantly on stage, unless they are darting off for a quick costume change (or in Wesley Charles’ case, changing seamlessly from Prince Daniel to Beast on stage!)

Ever unique at the rock ‘n’ roll panto are the music choices throughout. The cast always surprises with songs you wouldn’t necessarily expect to hear in a traditional pantomime; Barry Island (the ‘Gaston’ character of the piece) enters singing Uptown Funk, which is hilarious sung in a typical upper class English accent, Beast gives us a beautiful rendition of a slower version of Higher Love and his duet with Belle, Shallow from the remake of the film A Star is Born, is stunning.

Phylip Harries’ Dame is always a highlight; as Nanna Nerys his timing is flawless as ever, his comic delivery spot-on (with a few more saucy innuendos than I remember from previous years!) and his costumes steal every scene, from his entrance as Mary Poppins meets a traditional Welsh Lady to his final costume as a ‘Once Upon a Time’ storybook, complete with microphone pocket!

As always with a Theatr Clwyd panto, the Welsh language is heard plentifully throughout the production with frequent mentions of local places from Mold to Bangor, Buckley to Rhyl! And it is always refreshing not to have Christmas forced upon an audience too early. I am sure as the lead up to the big day gets ever closer, the cast add a more festive feel, but for now, it is nice for the festivities to be downplayed. Oh, yes, it is!

A big ‘wow’ moment in this production comes near the end of the show as Beast explains to Belle that the library now belongs to her, and she can view it by opening a single, magical book. As she opens the book, we see the stage transform; the scenery rotating to reveal bookshelves upon bookshelves, the patterns on the staircase flipping into more books, hanging books descending from the ceiling and open books above our heads in the auditorium lighting up. Breathtaking!

This panto truly is one not to be missed, it takes all the elements of a traditional panto but, for me, adds a touch more class, oodles more talent (how many panto Dames have you seen playing the saxophone?!) and professionalism that is leaps and bounds above any other!

Beauty and the Beast | Theatr Clwyd