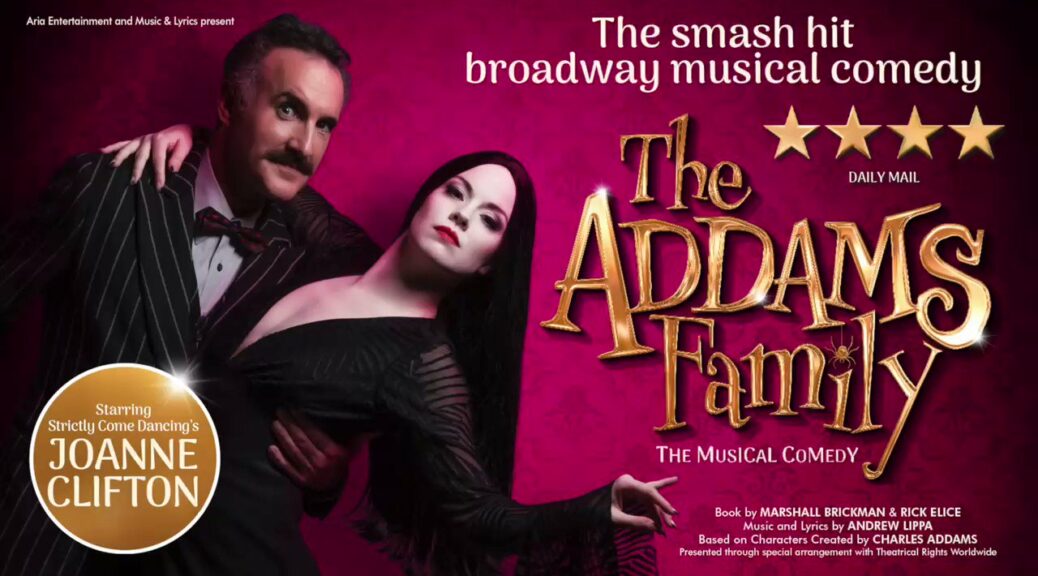 Here comes trouble! The world’s favourite kooky family return for their second UK tour in gloriously ghoulish fashion. The Addams Family have chilled and charmed audiences in equal measure since Charles Addams first debuted them in the New Yorker in 1938. After appearing in countless TV shows, movies and animated films and becoming a cult classic (emphasis on ‘cult’), it was only natural that the Addamses took up their rightful place on the stage – and this new version of the musical comedy, starring Cameron Blakely and Strictly Come Dancing Champion Joanne Clifton as the iconic Gomez and Morticia, is simply the best night of theatre I have had in years.

The most terrifying thing  (!) imaginable has happened: Wednesday Addams has fallen in love. To add insult to injury, he’s a sweet young man from a respectable family – and, as if it couldn’t get any worse, they’re getting married. As the Addamses plan to host a dinner party for the ‘normal’ Beinekes, Wednesday clues Gomez in on her engagement, but keeps Morticia in the dark – leading to secrets, lies, and lots of laughs along the way. Think The Birdcage, but make it Goth.

Created by the team behind the international hit musical Jersey Boys, with music and lyrics by Tony-nominated Andrew Lippa, The Addams Family is a thrill on every level. From Matthew White’s lively direction to Bob Broad and Richard Beadle’s sensational musical interpretations, this is a creative team at the top of their game. The sumptuous costumes and imposing set, gorgeously designed by Diego Pitarch and accentuated by Ben Cracknell’s spooky lighting, are so vividly conjured they make you feel like you’re walking into the movie. Scene transitions are often overlooked, but if they’re done well, you notice – and the attention to detail makes what must have been a logistical nightmare look effortless.

That’s to say nothing of the peerless ensemble. The chemistry between Blakely and Clifton positively smoulders, and their highly-anticipated Tango de Amor dance scene is spectacular: it’s a ten from me! Blakely, reprising his role from the 2017 cast, has Gomez down to a tee, and Clifton nails Morticia’s sultry elegance and grace – she knows Morticia is all in the movement, and she lives and breathes the character while putting her own spin on the role. They’re magical together.

They head up a cast that feel like one big happy family. Scott Paige plays Uncle Fester as a lovably manic emcee with let’s say lofty romantic aspirations, and who deftly guides the audience through the spooky shenanigans. Kingsley Morton brings a punk edge to Wednesday and her impressive voice is showcased in the ultra-challenging number, ‘Pulled’. Sean Kingsley and Kara Lane are hilarious as the stuck-in-a-rut Beinekes and Ahmed Hamad brings a sweet, youthful energy as their son and Wednesday’s intended, Lucas. Morton and Hamad have lovely chemistry and their number ‘Crazier than You’ is a standout. Rounding out the main cast we have the fabulously chaotic stylings of Grant McIntyre as Pugsley, Valda Aviks as Grandma, and Dickon Gough as the Karloffian Lurch.

The ‘living’ Addamses are joined for most of the action by the ghosts of their ancestors who, while unnamed and largely silent, are the beating heart of the show. Every single performer is a star: Sario Solomon, Ying Ue Li, Matthew Ives, Abigail Brodie, Sean Lopeman, Jessica Keable, Sophie Hutchinson, and Castell Parker move ethereally around the stage as a Gothic Greek Chorus, aided by Alistair David’s superb choreography. And their presence underscores the beautiful notion that the people you love are never truly gone.

As the Addamses sing, ‘It’s family first and family last’ – and The Addams Family is a treat for the whole family with plenty of tricks up its sleeve.