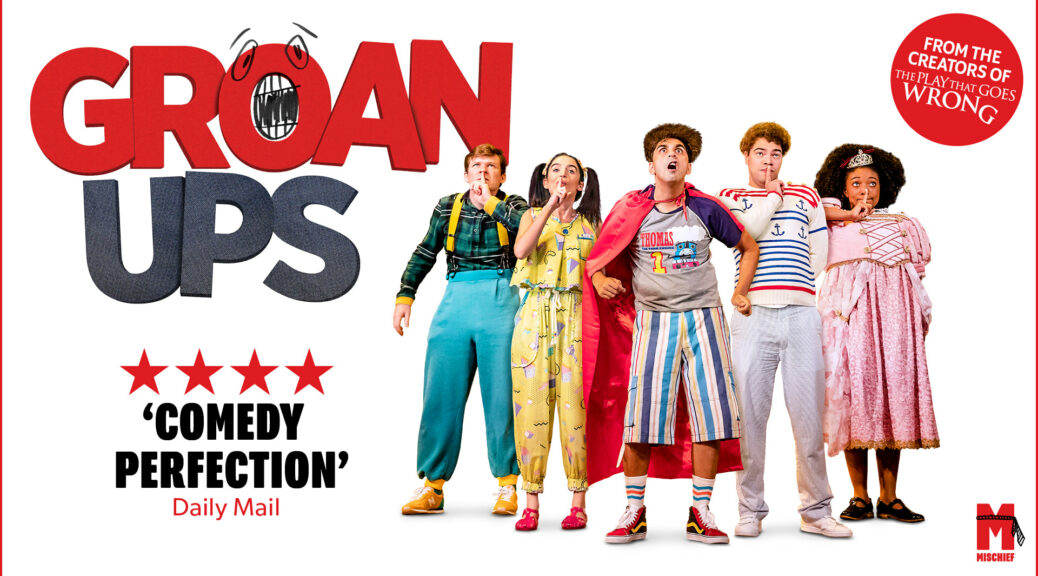 Direct from the West End, the award-winning Mischief Theatre crew is back in Cardiff with a raucous new comedy. Groan Ups follows five characters through the trials and tribulations of primary school, high school, and the inevitable reunion years later when these supposed grownups dig up old rivalries, flirtations, and secrets thought long left on the playground.

We follow this famous five through three key stages in their lives: when they’re chaotic and demanding at age 6, angsty and hormonal at age 14, and regressive and regretful at age 30. The cast excellently evoke these different ages: Dharmesh Patel nails the faux-casual bravado of the teenage boy while Lauren Samuels plays a pitch perfect precocious toddler always running for teacher when the others misbehave. The ensemble’s effective characterization is buoyed by Fly Davis’ incredible and transportive sets which perfectly conjure the classrooms of your memories, cleverly using scale and exaggerated sizing to capture the feeling of towering over the chairs which once towered over you.

The first half might seem a little much at times, but it’s all brought round so beautifully in the second, with every seemingly-throwaway joke and character beat returned to with added meaning and bigger laughs. The second half also features Jamie Birkett as Chemise, an aspiring actress who Simon hires to play his girlfriend, who damn near stole the show with a single ‘aye’ and our hearts with everything that came after. Killian Macardle also draws laughs as a stern teacher in the first half and an overconfident alum in the second.

It might not quite reach the dizzying heights or the razor-sharp precision of The Play that Goes Wrong – but it doesn’t need to. And it ends on a genuinely meaningful note: the problem is not that we look into the past but that we do so with rose tinted glasses. Memories tend to dull the blade of experience, and Groan Ups captures all the pining, the teasing, and the worrying you’ve tried to forget; all the horror and the beauty of growing up and then realising you never really did. Nostalgia is a trick, because it fools you into believing your best days are behind you – but they are ahead, if you manage to maintain that sense of play and wonder.

Groan Ups concludes that we might not ever truly grow up – but we can grow, if we can keep that youthful sense of hope, fun and possibility. Good comedy is the hardest art form; great comedy is almost impossible. But Mischief have worked their magic once again.

Groan Ups is playing at the New Theatre Cardiff through Saturday 16th October.