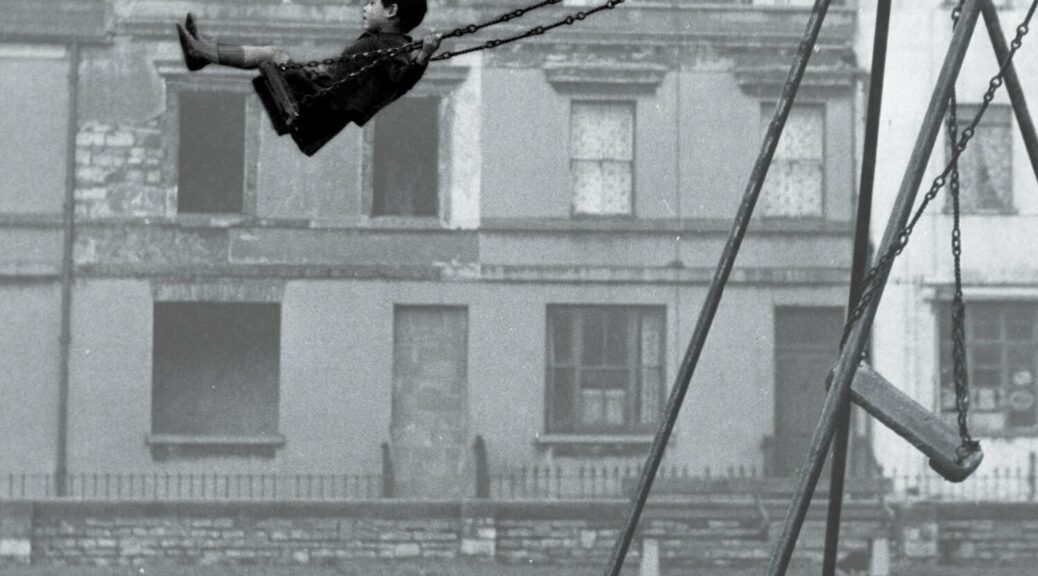 Small Change is written by Peter Gill & presented by Both Barrels Theatre. The play takes you on a journey of self-discovery from childhood to manhood as well as a poetic adventures exploring themes closely linked to identity, undealt issues, mental arrest, poverty & self-reflection. This play is set on the east side of Cardiff in the 1950s and 70s, which was known mainly from the characters’ accents.  Small Change centres around Gerard, a troubled man at the end of youth, trapped by his past mentally & emotionally. The play begins with Gerard and Vincent beginning as teenagers getting up to mischief, as though they were schoolboys finding things to do to relieve their boredom.

The Mis-en-scene in this production is kept simple, the set is made up of huge long rectangular blocks, which gets moved throughout. This play has to be well followed to grasp any surrounding narrative of who’s being directly referred to as there’s a lot of continuous character switches.

Mrs Driscoll (Tameka Mortimer) struggles to cope as her complex home life feels surreal & distressing, she suspects that Mr Driscoll is seeing someone else due to his consistent absences from their house. Vincent, her son, had been thrown out of his local Catholic parish church – not much luck follows him soon after as his friend Gerard (Andy Rush) ends up drowning with guilt during adulthood, meanwhile Gerard’s mother, Mrs Harte played by (Sioned Jones) who’s character is extremely feisty as well as outspoken & consolidating has a strong nature to bite, however simultaneously loves her husband regardless.

The production portrays the impact of the past, present and future fairly well. The play become slightly unclear towards the end as situations portrayed climax differently, causing greater understanding although the understanding in the first place was not so transparent, it’s revealed towards the end that there are certain things that were left unsaid in an era when homosexuality was still illegal in Britain. Here, we begin to see expressions of love between the two men on stage – however, despite the private setting of their conversation, it doesn’t quite convince Vincent causing them to distance further.

During this play sexual orientation is not, in any event, the central point of the show, which appears to be more to do with exploring why it is that people are driven to behave in certain ways. Whilst talking with several cast members after the play it was agreed that the script was slightly confusing, some felt that same way when they were first exposed to the script, I was slightly surprised to hear that the storyline of Mrs Driscoll was based on a true story. Overall, the humour of this play became more amusing towards the end, the small space was well used & each actor performed their characters well.