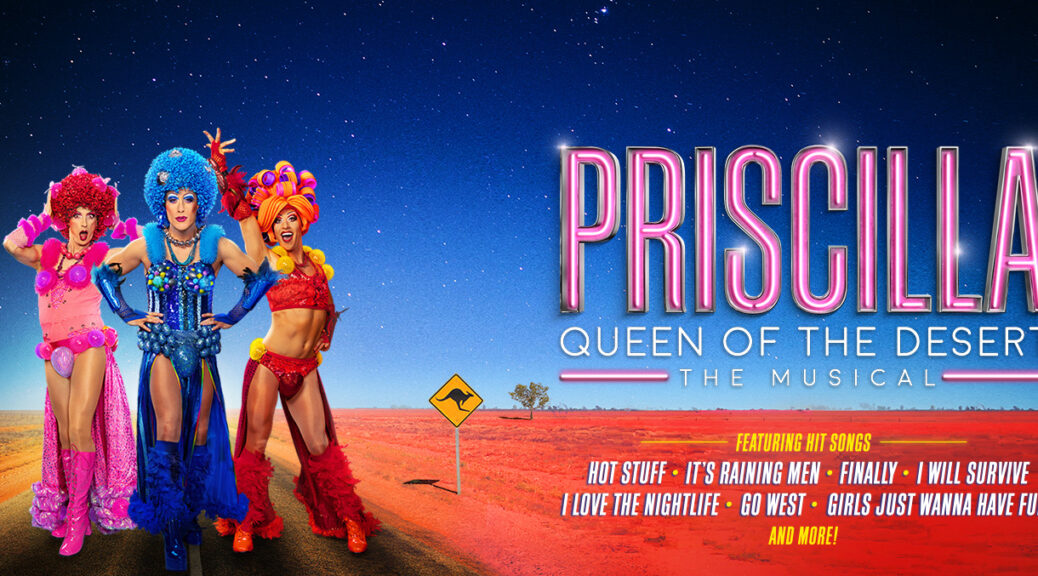 Trigger warnings for the show: strong language, violence, and homophobic and transphobic slurs.

Before there was RuPaul, there was Priscilla – who, like Divine and Crystal LaBeija before her, brought drag to mainstream attention. The 1994 movie, starring Hugo Weaving, Guy Pearce and Terence Stamp, won an Oscar for its spectacular costume design and introduced a new generation to a thrilling world of glitz and glamour, a world to which the stage musical eagerly wants us to return after being left so long in the COVID wilderness. Racy, rowdy and rambunctious, Priscilla Queen of the Desert is a riotously fun time that reminds you exactly why live theatre is irreplaceable and invaluable.

It’s thrilling to be back in the New Theatre after so much time away, and the Priscilla UK Tour is the perfect show to welcome us back through its doors. The show centres on three drag queens, two cis men and a trans woman, who journey across the Australian Outback on the titular tour bus. Tick/Mitzi Mitosis (Edwin Ray) persuades two close friends – egocentric ingénue Adam/Felicia Jollygoodfellow (Nick Hayes) and drag doyenne Bernadette (Michael Western) – to perform their act at a casino in remote Alice Springs, where Tick will have the opportunity to reconcile with his estranged wife and son. Along the way there are sequins, setbacks, and singalong disco classics that will have you dancing (COVID-safe) in the aisles. Fun, filthy and fabulous – Priscilla puts the ‘extra’ in ‘extraordinary’!

Directed by Ian Talbot and produced by Mark Houcher and Jason Donovan (who originated the role of Tick on the West End), the show is a jukebox musical brimming with camp classics from ‘Boogie Wonderland’ to ‘Go West’ to ‘Hot Stuff’. Every musical number is joyous and unique, and songs are beautifully woven throughout (like Dionne Warwick’s ‘I Say a Little Prayer’, which recurs in its most poignant moments). While the humour might feel dated at times, the songs never do. Charles Cusick-Smith’s sublime costumes do justice to the Oscar-winning originals while bringing a new flair and Tom Jackson-Greaves’ excellent choreography lights a kinetic spark that burns throughout the show – they, along with the exceptional live band (directed by Richard Atkinson), ensure that the production is a feast for the eyes and ears.

The level of talent on display is staggering. Edwin Ray brilliantly anchors the ensemble as a man trying to marshal all the facets of his identity, while Western’s Bernadette exudes Old Hollywood grace and glamour and Hayes’ Felicia bags all the best songs, including a truly show-stopping entrance number – you’ll know it when you see it. I have never seen a happier ensemble: from the main trio to the Three Divas (Claudia Kariuki, Aiesha Pease and Rosie Glossop) to the performers dressed variously as giant cupcakes, dancing paintbrushes and plaid-clad delinquents, the cast’s unadulterated joy at being back in action was palpable.

While the zingers sizzle and the sequins glitter, Priscilla doesn’t gloss over the real-life hatred and violence inflicted on the LGBTQ+ community. Bernadette not only faces transphobic bullying from bigoted straight people but from Adam, who repeatedly deadnames and misgenders her. Adam himself is the victim of an attempted assault, and even apparent allies can turn out to be fair-weather friends when the sun rises. Though the central trio often bicker and Priscilla often breaks down, they stick together and they neither give up nor turn back, proving that true allies are there even after the music stops and the engine fails.

Priscilla concludes that, no matter how long and winding the road, your family will always be waiting to welcome you home at the end of it – and that true family are the ones who stay by your side no matter how bumpy the ride. Family are the people who climb mountains with you, both literal and figurative; they are the people who help you follow your dreams. When the audience rose, as one, for a much-deserved standing ovation, it felt like the best kind of dream: the one that comes true.

*The review previously misstated the show’s costume designer. This has been corrected.*