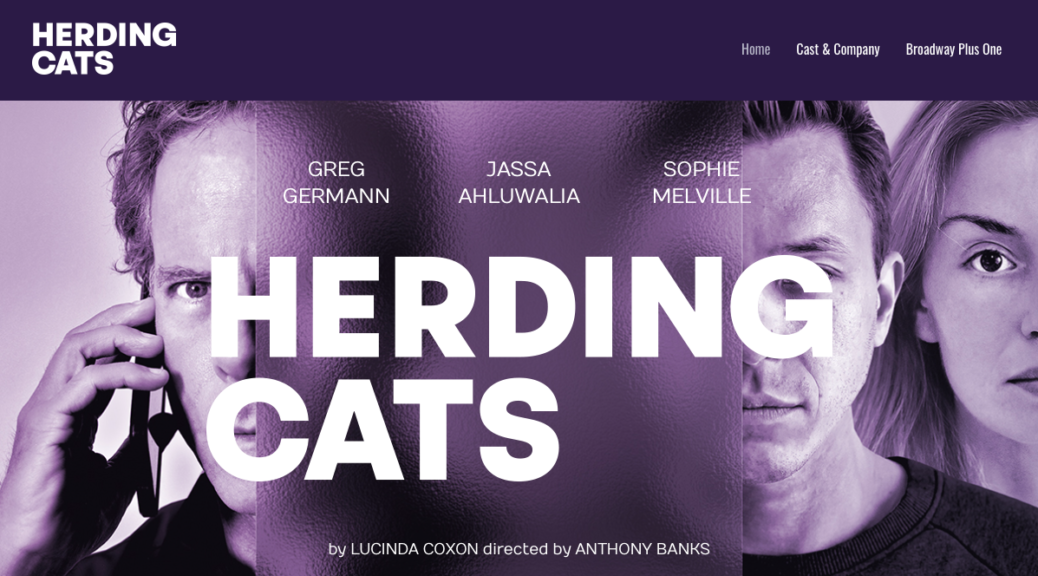 The revival of Lucinda Coxon’s Herding Cats, first produced in 2010 at Theatre Royal Bath, and directed by Anthony Banks is a raw, complex and twisted dark comedy that hacks away unapologetically at some of humanity’s worst ills. This time, again directed by Banks, it’s at the Soho Theatre in London, and presented with a live-stream component, promising to be a groundbreaking experience.

Set in a hardcore, passive-aggressive emotional landscape, the play deals with loneliness, intimacy and trust, and Coxon’s cutting, acerbic dialogue — especially out of the mouth of Justine, played by Sophie Melville (Iphigenia in Splott) — hurts, a lot. Justine and Michael, played by Jassa Ahluwalia (Peaky Blinders) are 20-something flatmates. Justine works long hours in an office; Michael appears to work way fewer hours, from home. She dresses well and looks great; he doesn’t change his clothes throughout. Justine is hyperactive, a non-stop talker and an open book. Michael, while responsive, is subdued and reveals little. She is trying hard to resist a drink; he drinks and offers her drinks. Their relationship looks, for all their differences, to be one of good friends, who like and trust one another. But behind Micheal’s sealed lips are secrets, and the underlying cryptic tension questions everything.

The aura of the entire production, including the pre-set, is edgy. The notion of this shared live and digital performance space is edgy. The soundscape (Ben & Max Ringham) adds more edge. There is a sense that we are all in this together, but only in that we are all, audience included, flying by the seat of our pants. In all other ways we are disconnected, and that produces an uncomfortable energy in the house. Well, in my house anyway. Even digitally, this play insists we feel something, even if we don’t know what to feel yet.

‘Enter’ the third, especially evasive, character, Saddo, played by Greg Germann (Grey’s Anatomy). He’s in his car on the phone, literally elsewhere, and that’s the point. The achievement of his playing the scene live from L.A., alongside and together with  Ahluwalia live on stage in London, is very cool. That he hits his marks consistently without a hitch from start to finish is quite a feat, but once we’ve seen the technology work in Germann’s first appearance, it doesn’t wow us quite the same way again. We have become accustomed to the tech working in other settings, so I’d surmise that this is less breakthrough stuff for audiences and more for the producers (O’Henry; Stellar; Jeff Hollander; and Theatre Nerd). But you know, my response is based on having watched digitally at home. The in-theatre audience experience may be completely different, and I’ll be interested to find out more about that. I’d also like to get backstage and talk to the stage manager (Rory Neal-McKenzie) about his experience calling the show!

Through an exclusively on-screen persona and regular sexline chats with Michael, Germann delivers Saddo’s special recipe for evil-dipped-in-shameful somewhat flatly, but it is still a gut full. Saddo is Michael’s ‘Daddy’. Michael is Saddo’s daughter? More provoking is the jaded and skillfully manipulative Michael, and Ahluwalia’s vocal timing in these scenes is impressive. Almost in the same breath he switches using his little girl voice to seduce her Daddy and Michael’s adult male voice to insist that Saddo ‘put the payment through’.

Melville reaches the highs and lows of this woman’s desperately genuine, heart-on-sleeve attempt to be the best person she possibly can be, naively trusting, viciously self hating, with subtle precision.

Doubly mention-worthy is the costumes (Costume Designer, Susan Kulkarni). Michael’s ‘look’ represents the popular pajama culture spawned years before we were locked down in our homes, but one that took firm hold. Multiple costume changes intimate that Justine’s clothes define her, and that she also defines her generation, and I’d bet there is interest in where to find them.

Throw in Justine’s love-hate relationship with her boss, who crosses the line; her on the wagon, off the wagon relationship with alcohol; and the nebulous way her panties keep disappearing, and you may find yourself crying and laughing at once. Genders, roles, intentions, and outcomes are blended into a sick smoothie of sorts, rich in nutrients and toxins in equal measure, not all ingredients are clearly listed on the label.

Justine and Michaels duet of The Twelve Days of Christmas serves as an Intermission and is much needed to break the tension, but it is not enough to brace us for what is to come. And the caustic ‘punch’ line — is not a joke.

Leslie R. Herman Jones for Get The Chance Wales, May 2021