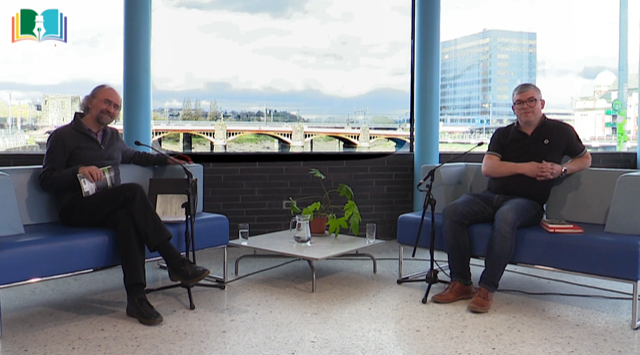 LoveReading LitFest, the recently launched, digitally native, subscription-based books and literature festival, has partnered with Newport Live – a charitable trust providing cultural and sporting activities in Newport, Wales – to support the launch of the critically-acclaimed debut novel Many Rivers To Cross by Dylan Moore at an exclusive event. The talk will be live on LoveReading LitFest tomorrow.

The author, who is the editor of the welsh agenda, was interviewed about his new book by Sharif Gemie, with the session filmed at The Riverfront Theatre and Arts Centre, right in the heart of the city centre. Sharif Gemie is a former Professor of History. He mainly researched people on the move, whether refugees (Outcast Europe, 2011), Muslims in Europe (French Muslims, 2010) or hippy travellers (A History of the Hippy Trail, 2017). He lives in Newport and is currently writing a novel set among UN aid-workers in Germany, 1945—46.

Written following a period volunteering at the Sanctuary Project in Newport, and partly based on interviews with asylum seekers and refugees, Many Rivers To Cross traces a series of journeys – migrations across time and space – from the streets of Pillgwenlly, Newport to the ‘Jungle’ camp at Calais, and from Ethiopia to the island of Lampedusa. Described by Welsh novelist, poet and translator Siân Melangell Dafydd as “an essential story for an age of migration”, the novel takes the reader to places most of us have never been, and would never wish to go.

The event also featured contributions from two refugees originally from Ethiopia, now settled in Newport. Biniyam Birtukan talked about how his work as a freelance magazine journalist in Ethiopia became impossible due to issues around freedom of speech, his role in establishing the famous St Michael’s Orthodox Church in the ‘Jungle’ camp at Calais, and the satisfaction he has found working as a healthcare assistant since being granted leave to remain in the UK. Yohannes Obsi talked about his mixed heritage background and how his support for the formerly banned opposition group the Oromo Liberation Front landed him in government detention, from which he escaped to make a dangerous journey through Sudan, Libya, Italy and France to reach the UK.

Paul Blezard, Festival Director at the LoveReading LitFest, said: “Dylan’s powerful new novel does something extraordinary. It takes us beyond the screen images that have filled us with horror and compassion for too long and straight into the hearts, minds, hopes and fears of those who are forced, or choose, to undertake life-risking journeys towards safety and sanctuary. We are so honoured and privileged to host Dylan, Biniyam and Yohannes and to support them through this important event.”

Alan Dear, Head of Theatre, Arts, and Culture at The Riverfront Theatre, Newport Live said: “TheRiverfront is delighted to make this new partnership and as we start on the long journey of Covid-recovery we hope that literature will form a core part of our future programme. We now have the capacity to provide content digitally and hope that this will provide pleasure to our new and current audiences until a time when we can reopen our doors again.”