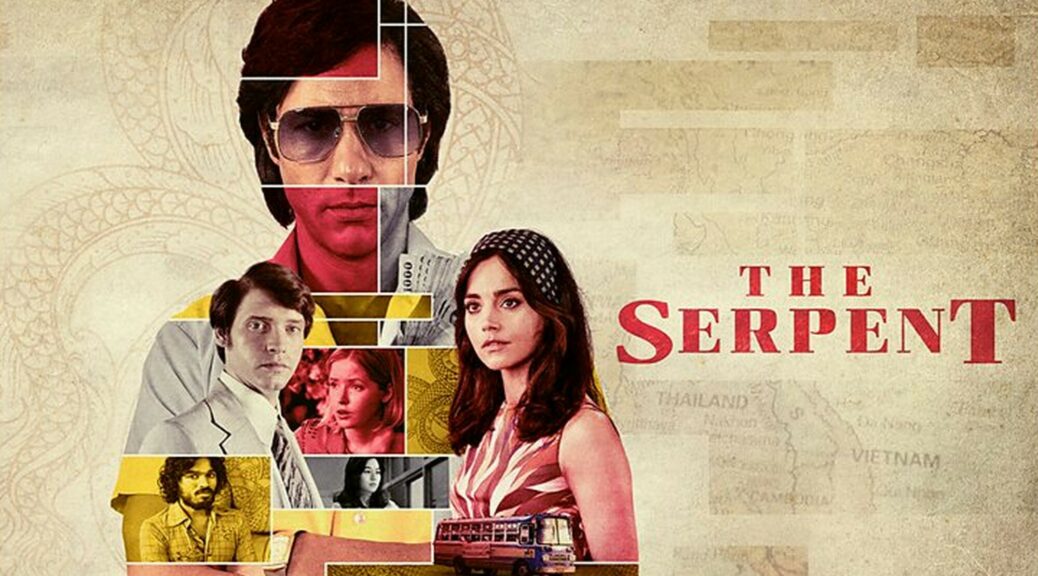 With less to do during lock-down, Simon Kensdale has been resorting to the BBC i Player.  He has noticed how many broadcast crime series consisting of murder enquiries.  Some are truly horrific, like The Serpent, in the sense of being both true and frightening.  It has made him wonder if there is a danger of TV audiences gradually becoming desensitised to violence. Simon explores these areas in the article below.

There is a secondary story in The Serpent about Herman Knippenberg.  He’s a Dutch diplomat obsessed with tracking the killer – Sobhraj – down and his meticulous record-keeping finally results in success. His obsession costs him his marriage and threatens his career prospects.  He’s odd, too, keeping boxes of paperwork with him wherever he goes, rather than throwing anything away.  But at least Knippenberg’s activities are normal – ish. In following the series, through him we see a bit more of humanity than that of a unique, psychopathic killer who gets off on drugging and murdering young travellers in the Far East.

Knippenberg’s behaviour makes him similar to the average TV detective.  We can almost predict – as yet another crime series kicks off with yet another discovery of the body of a dead woman – that there will be someone on the case who can’t let go and who also cannot maintain a private life. The detective will be divorced or uncommitted to a relationship. Recently several detectives have been shown on TV as also having problematic relationships with their daughters. Ironically, in The Investigation – the true story of a particularly bizarre Danish murder, committed on a privately-owned submarine – it turned out that the Head of Homicide really had been alienated from his adult daughter.

What seems to happen in all these series is that the main thrust of the narrative – the need to apprehend a killer – is cross-cut with ‘everyday’ human drama.  The lives of the detectives and the supporting cast of police officers are presented as if they are representative of the wider community. I rather doubt that the professional upholders of law and order are as interesting as the TV companies make them appear to be, or even as interesting as Knippenberg, but I admit that this could be a personal bias. In any case, their personal dramas are never meant to be as important as the main story line. It’s as if no-one believes there’s any serious drama going on in human situations anywhere that does not involve a killing – or three, or nine.  Everything that is not murder is soap.

But murder is rare in European societies.  It is a comparatively easy crime to solve, as there is usually a connection between the murderer and his victim.  Of course, recently the police clear-up capability has been speeded up by the information processing of computers and by the scientific advances which make DNA recordable, storable and traceable.  The police can also monitor mobile phone usage and draw on the massive amounts of film footage accumulated by security cameras. But where there is no connection between victim and killer – as in the case of Sobhraj – or where there has been a professional ‘hit’ – the police are still ineffectual.  They often have to wait for the killer to make a mistake – as in they did in the case of the Yorkshire Ripper – before they can solve the case.

The fact that you and I know about these new developments is an indication of how many crime series we have swallowed down whole.  We could almost all now write one ourselves.  You open with a shocking and mysterious death, preferably in an unusual setting; you introduce in a handful of ‘interesting’ characters and some back story.  When you feel the tension level flagging, you throw in some more bodies, as if adding fuel to the fire.  (You needn’t concern yourself with the fact that with murders more is actually less, since the audience can’t keep on meting out its sympathy and will get emotionally confused as the body count increases, forgetting who got killed first.)  You can enrich your material with a red herring or an unexpected clue and you must include a chase, on foot or using cars.  You might even put in some comic relief before you wrap it everything up with a dangerous, ‘dramatic’ confrontation with the murderer. The over familiar narrative process is meant to reassure everyone that, however bad things appear to be, truth will out and justice will be delivered.

More than exciting an interest in the nastier side of life and the worst forms of human behaviour, I think there is a problem with this narrative form. Seeking to reassure a mass audience with a basic fantasy is a form of brainwashing.  We are seduced into abandoning our rational awareness that murder enquiries are nothing like as tense and interesting as the way they are presented (The Investigation is an exception to this rule) because of the real time they take and because of the dull routine of the work involved.

More importantly, few of us live the experience of confronting a problem which gets solved, allowing us to we live happily ever after.  Instead of having one large and horrific issue to grapple with we have innumerable minor difficulties that most of the time add up to make our life either frustrating or frightening.  We know this situation is never going to change, that nothing we can do will make any difference and that nobody is coming to help.  If we are not actually the victim in an unsensational case, we will be like the junior police officer expected to solve a crime with access to limited information and having no authority, struggling with a mountain of bureaucracy, against a background of incompetent management and competitive colleagues.  Our family life may not be any more straightforward than our work life.  It will be banal but it will consist of more than a communication difficulty with a daughter.

Given this reality, in my opinion what we need from the purveyors of fiction, is a constructive reflection on our circumstance – an experience exploring the outlines of the predicament we find ourselves in.  This should be done in a way that is not escapism disguised as realism.  The proliferation of crime dramas based on murder stories suggests that TV as a medium, despite the talent and intelligence of the people working within it and despite the quite astonishing technical facilities available to them nowadays, is not able to offer this kind of creative reflection.  Maybe I am expecting too much from what can only ever be light entertainment.  If I want the kind of imaginative experience I am defining, perhaps I have to read novels or go to the theatre.

I did appreciate the ingenuity of The Serpent, in particular the way the timing of the action moved backwards and forwards.  I was suitably appalled by what Sobhraj did, although he was presented as being so perpetually cool and self-controlled that he seemed quite dull.  Little space was given to exploring his capacity to be so charming and desirable that his partner and indeed his ex-wife both found him irresistible, despite their knowledge of what he was capable of.  For me, the really interesting questions surrounding Sobhraj remains not what he did or how he got away with it, so much as why he did it and why others helped him.

Otherwise I thought the acting in the series was of a good standard – although Tim McInnerny hammed it up as a Belgian. The dialogue was credible and moved the plot on even if it didn’t say much about Sobhraj’s motivation.  Since the series draws on a true story for its outline it only required the details to be coloured in carefully.  The impressive settings for the action in Thailand, India, Nepal and Paris were like pages from a holiday brochure.

Would a closer focus on Sobhraj have demanded too much of us?  It would have required us to sit and pay attention and respond to words and phrases in conversations and note small gestures and aspects of behaviour in the way we do in front of a live performance.  We would not have been able to just get up and go and make a sandwich or look at our texts or carry on with the ironing.  We might, though, have been truly moved by what we were watching.  We wouldn’t have wanted to either pause an episode or wait until next week for the sequel.  The story would have possessed us.

Numerous people have said they ‘loved’ The Serpent. Personally, whilst I might admit to loving plays by Shakespeare and Moliere, or novels by Dickens and Tolstoy, I can only say the series temporarily distracted me whilst my options of doing anything else other than watching TV were limited by lockdown.  Despite its expensive ingenuity it did not tell me anything new about the human condition and it did not give me that sensation of excitement that engagement with a work of art provides.

Get the Chance supports volunteer critics like Simon to access a world of cultural provision. We receive no ongoing, external funding. If you can support our work please donate here thanks.

One thought on “The Serpent – Reflections on a TV Crime Drama”