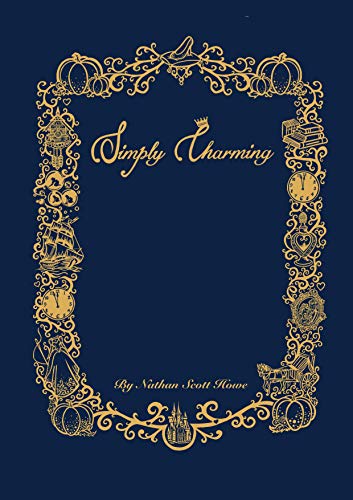 Having spent a year trapped in our towers and unable to let our hair down, it’s only natural we would long for the escapism of fantasy. Even before the world stood still, a rise in fairy tale retellings spoke to our collective yearning to break free from everyday existence; to conjure up a pumpkin carriage and finally go to the ball. Fairy tales have a unique power to transport you into a world where anything is possible. This is a realm in which good people get everything they’ve dreamed and deserved, where cynicism and cruelty go unrewarded, and where a happily ever after is only one wish away. If you want your wish granted, look no further than Simply Charming, a reimagining of Cinderella from her prince’s perspective, written and illustrated by Nathan Scott Howe.

Cinderella is one of our most culturally beloved stories, retold countless times in myriad ways – but the focus, as you might expect, has (almost) always been on its pure-hearted heroine. Simply Charming flips the script by centring on Prince Charming himself, a character so historically generic he’s become a byword for one-dimensional hunky niceness and very little else. In the original tale, he’s more a prize than he is a prince – simultaneously the person everyone’s searching for and the person whom nobody truly knows. Howe’s book not only gives Prince Charming a personality and a proper character arc, it shows how his parents shaped the man he would become; a man who would search an entire kingdom to find his true love.

Just as Maleficent fleshed out Sleeping Beauty’s ‘villainess’ into a complicated anti-heroine, Simply Charming takes a character formerly reduced to one-note chivalry and explores exactly why he deserves that much-prophesied happily ever after. Part one focuses on Florence, Charming’s mother, and part two on Charming himself. Howe takes time and care to craft sympathetic characters whose company it is a pleasure to share, and you can sense his genuine affection for the characters in every word. It’s a real labour of love, having taken eight years from inception to completion. This self-published book has both the grounded, loving feel of Ever After and the sumptuous palette of the Disney classic. Howe has an eye for tone, texture, and visuals in his writing, and his brilliant use of descriptive imagery often made me feel like I was stepping into a painting – an immersive experience enhanced by his gorgeously illustrated chapter headings (which eagle-eyed readers might spot changing as the story progresses). The stunning cover image alone, which combines illustrations from key moments throughout the book, is a work both of art and heart.

I was constantly thrilled by Howe’s inventive incorporation of the Cinderella mythos – right down to the pumpkin carriage and the vengeful housecat! – in ways which wonderfully expand on and enhance the original tale. Learning the origins of these elements, and especially the motif of time which underscores the tale, has made the story even more resonant than it was before. It’s a rare treat to watch an author hone their craft in real time, and you can witness Howe’s confidence and skill blossom chapter-by-chapter. Although it may at times seem a little uneven, I feel this can be forgiven as the first half is setting up the pieces which pay off brilliantly in the second. Though I would have loved for some intriguing story points and interesting characters to have gotten more of the spotlight (a Poppi/Samuel spinoff, anyone?), I greatly appreciated the book’s focus on character and theme over plot. It reminded me of Becky Chambers’ Wayfarers series, which is more concerned with making you feel like part of a kooky and loving family than bamboozling you with twists. Simply Charming is a story for everyone: pure escapism into a kind and gentle world.

That the story concludes just before the happy ending we know so well is incredibly poignant. We know that Cinderella will marry her prince – it’s part of our collective consciousness, after all – but Simply Charming is about the journey to happily ever after. It’s like life: sometimes it all falls into place, and sometimes it doesn’t. Living happily ever after is never a certainty, and even if it does happen, we’ll never know where the fairy tale really ends. We’re left on the precipice of hope and promise; a precarity that a year in lockdown has only served to magnify.

Immersive, innovative, and involving, Simply Charming had me completely under its spell. Howe crafted a world I simply didn’t want to leave, and reading it was genuinely joyous from the first to the last word. During a time in which the bad news more often seems to weigh out the good, Simply Charming reminded me that people can be brave and kind, that wishes do come true, and that a love that is secure and unfettered and fought for is a magic all of its own. Last Christmas, Howe and his colleagues designed and produced Christmas cards to raise funds for the New Theatre (they sold out in less than a week). Profits from the sales of Simply Charming will be donated to Macmillan Cancer Trust and Great Ormond Street Hospital, and it’s a beautifully generous act which underscores the heart of the fairy tale: that time is fleeting and therefore precious, that kindness and goodness always triumphs, and that a happy ending lies ahead of us all, if we fight for it. In Howe’s words, “Have faith in your dreams, they have more power than you think”.

Simply Charming is available for digital download on Amazon.com.

Disclaimer: The author has a pre-existing relationship with Get the Chance; a copy of the book was purchased in exchange for an honest review.