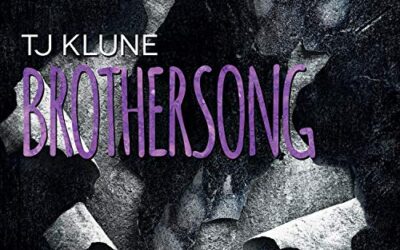 This book is a phenomenal climax to an already incredibly built series. This last book, Brothersong, capitalises on everything that the previous books – Wolfsong, Ravensong, Heartsong (and short stories Lovesong and Feralsong) have laid as a foundation.

I was beyond excited for this book to come out. Having read the first three books and the two short stories, I knew I was in for something amazing. I bought it as soon as I possibly could, but unfortunately had to backlog the book to prioritise some work for university. In mid-January however, I hit a vicious wall of both reader’s and writer’s block and couldn’t focus on any uni work put in front of me, and it took this for the idea to hit me: allow yourself to read TJ Klune’s Brothersong. It was a double edged sword: I knew I would devour the book and that this would spur me on in my own creative attempts, but I also knew that, being the last book, it would all be over as soon as I was finished. I thought that this would hinder me, but it didn’t. I finished the book over three evenings, I kept the story as my own for bedtime relaxation, although the “relaxation” part was assuredly difficult.

This was because the book is devastating. TJ Klune’s writing in this series is absolutely unmatched, no author has made me cry quite like this author has! I can only wish I had the skill to compare to it. Especially considering that this book builds on top of every relationship explored in the previous texts, every sentence you read digs deeper and deeper into your heart, and when that’s the case, the more something hurts when things go wrong for the characters.

In this book, our main character is Carter Bennett. In the previous books, main characters have changed to allow for the focus of the overall story to become more varied and be explored from a number of different angles. I think this was an excellent decision for TJ Klune to make: every character you come across is greatly fleshed out, and you get to intimately understand their connection to everyone, from four different points of view. The main cast are so interconnected that they work like one big family, and a lot of them are family, so a lot of the time the emotions behind these connections are charged with love and the desire to protect their own. Seeing as this is also a family of werewolves, the desire to protect their own is tripled, quadrupled, and beyond. The focus of the novels have always been on these werewolves and whatever “evil” they are up against – oftentimes fighting to protect their home, the civilians of Green Creek, and each other – but that doesn’t mean that they don’t take their losses, as well. There is enough tension in this book to build a house; a lot of “will they, won’t they” between our two main focuses – Carter Bennett and Gavin, and a growing feeling of unease and discomfort growing from the “bad guys”. The main antagonist, who has been a “bad guy” across each story, is Robert Livingstone – Gavin’s father (also Gordo’s father, another character in the series who is the main character in the second novel, Ravensong) which, quite expectantly creates tension between the main cast. What I think is amazing about this, though, is that the sons, Gavin and Gordo, are given time to process this, react to it, understand it and how it affects them, and lastly, at the very end of the novel when they successfully kill Robert Livingstone, Gavin and Gordo are shown burying his body and quietly grieving their loss, which every other character is shown to be completely understanding of, and completely welcoming of. The two sons are not chastised for their decision to do this, but are rather encouraged, and I thought that was a phenomenal writing decision on TJ Klune’s part. Bridging this gap between “good guys” and “bad guys” was lovely to see, and really elevates the book into maturity instead of being another “good-guys-kill-bad-guys-easy-peasy-no-remorse-no-thought” YA type of book, which is so refreshing to see, and I loved it.

For years now, Ox has been my favourite character. He was the main character in the first book, Wolfsong, and he was a lovely character. Transforming from a shy, quiet kid, into an Alpha with a powerful presence was amazing to see, it was like watching someone you love grow up. Through the next two books it was clear that there were things going on with Ox behind the scenes that we the readers did not have access to since we were following a different character with a different story being more important to them. This was an amazing tactic, and I really was in awe of it. Creating this mystery in turn created an unmatchable hype for the last book where we would finally realise what has been happening behind closed doors and get clued back into what Ox has been thinking this entire time. When the first little hints of self-sacrifice started to get peppered throughout the book, I was nervous, as I’m sure many other readers were. In the first book, towards the very end, Ox is very nearly killed before being turned into a werewolf to save his life. I had thought, initially, that I’d just read another book by some guy who had built up so much emotion only to fall into the “bury your gays” trope (Ox is bisexual, and discovered his love for another man – Joe – through the first book). When, in this last book, he was stabbed viciously through the stomach, I was terrified as I didn’t know of any in-universe way to save him and worried again, that after all this time, we had come on such a long journey just to trip and fall at the very end. Luckily, gratefully, I was wrong. I would give all of my trust to TJ Klune for the way that he treats his characters with such respect and love makes me feel so relaxed, and welcome into any of his worlds.

Admittedly, having discussed a lot of details from a lot of the series, this next statement might be considered redundant, but I will still stand by it: this series is one to experience, not one to read about second hand. This is the kind of series that you need to read for yourself, not reading about what I read and what I think. This book, this series, deserves more than 5 stars for the absolutely amazing effort it puts in, the story it tells, and the connections it makes. This really is a fantastic series, and TJ Klune deserves every piece of praise he gets for it.