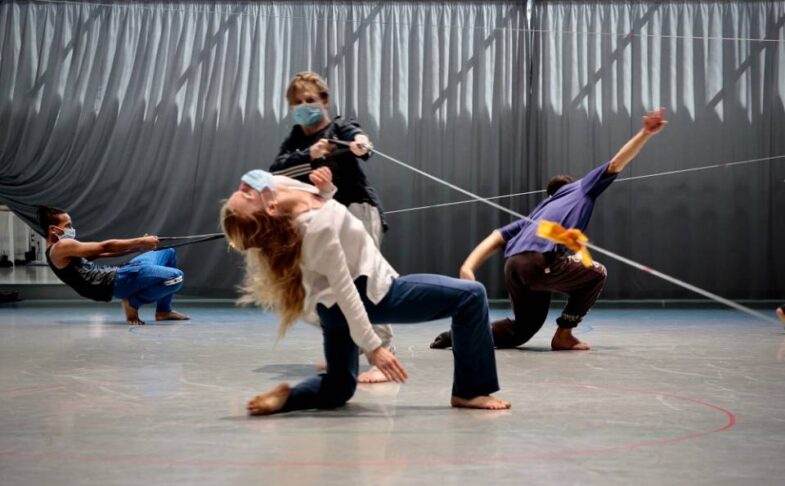 The Coronavirus pandemic has pushed artists to make online videos. This has too often resulted on mediocre videos of a dance or theatre piece, forgetting that film has different rules. With Draw From Within, Rambert were careful to avoid this mistake by commissioning choreographer and filmmaker Wim Vandekeybus. The camera movements are integral part of the show. Yet, Draw From Within fails to draw the audience in because, ironically, not enough attention has been given to the needs of film-making. Rambert’s dancing is impeccable; the visual impact is non-existent.

The intro is perhaps the most cinematic part of the show. We see two dancers talking on top of a roof and then follow the flame of a match down the stairs. The show takes nearly thirty minutes to take off and it quickly lands nowhere. According to Vandekeybus, Draw From Within is about “threat but also about liberation, about death but also about birth.” He says he wanted to “go under the skin and draw upon our innate human qualities: the human heart beat that unites us, the arc of a human life, the blood which courses through our veins.” With no story, no dramatic visuals, and dreadful music, I doubt many viewers kept away from the allure of their phones.

I have no idea why Rambert chose to make the video of a real-time live-stream show instead of making a dance film, which would have given them more flexibility. It suggests a simplistic understanding of what is a really ‘live show’ (in person). A live show has intimacy and an energy flow between performers and audience. It is irreplaceable. Live TV conveys reality as it’s happening not intimacy. Film is a very different medium from the stage. It is a two-dimensional visual product that requires many elements to work together to draw the audience in. If you have no story, it’d better look good. Draw From Within looks boring.

The obsession with narrative found in film-making is due to the necessity of keeping people with you for hours. It is lazy and performance artists should not follow the rule-book of commercial film-making, yet they should study the rule-book anyway instead of dismissing films as not art. Covid-19 is disrupting the arts but it is also an opportunity to go beyond the fixed boundaries of theatre, dance, film, performance art, circus. The arts are in great need of innovation. This can only come when artists watch, listen, and reflect on other types of performance. Now is the time.