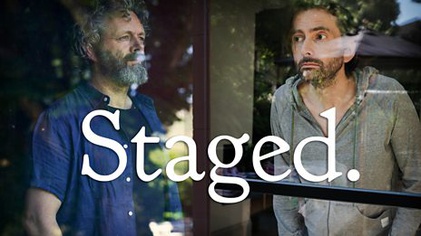 2020: the year when hair was long and tempers were short. With everyone squirrelled away in their homes for months on end due to a pandemic unparalleled in our lifetime, we turned to the arts for comfort and distraction – and yet, as a medium in which social distancing is almost impracticable for artists and audiences alike, they are now in a battle for survival. COVID-19 has compelled writers and performers to innovate as never before, and BBC’s Staged is proof of what can be achieved with a little Wi-Fi and a whole lot of heart.

Easily the best entry in the rapidly-emerging lockdown genre, Staged is a note-perfect ode to the quarantine blues. Here’s the pitch: Simon Evans (who plays a fictionalised version of himself, and also directs and co-writes the series with Phin Glynn) was due to stage a starry West End production of Luigi Pirandello’s absurdist classic Six Characters in Search of an Author – until COVID-19 closed the theatres. Determined to get a head start on the new season, he decides to conduct rehearsals with the cast over Zoom – but corralling the duelling egos of co-stars Michael Sheen and David Tennant (also playing exaggerated versions of themselves) proves the most difficult task of all.

Anyone who has sampled the (un)earthly delights of Good Omens, Amazon and the Beeb’s glorious adaptation of Terry Pratchett and Neil Gaiman’s Python-esque apocalypse yarn, will be keenly aware of the heavenly rapport between Michael Sheen and David Tennant. There, Sheen was the angelic Aziraphale to Tennant’s demonic Crowley, but in Staged the roles are reversed, with Sheen playing wicked, wolfish devil to Tennant’s sweet, beleaguered pacifist. (They’d said in the past that were they to take Good Omens to the stage, they’d swap roles every night – Staged works both an audition for the role-swapping shtick and a testament to its success). Their chemistry transcends miles, screens and technical difficulties – released on June 10th in six fifteen-minute episodes (20-minutes if you check out Netflix UK’s extended editions), Sheen and Tennant charmingly bicker over increasingly petty minutiae, like the contentious issue of whose name comes first on the poster, which ends up being one of the series’ best running gags – and that’s really saying something for a show so cleverly scripted as this). It’s an utter delight to see them reunite again so soon, and I hope this proves just the second in a slew of future Sheen-Tennant (ad)ventures.

Featuring delightful cameos by Hollywood royalty from both sides of the pond (I won’t spoil them here), and turns by Adrian Lester as a superficially zen version of himself and Nina Sosanya as the only outright fictional character (Jo, an acidic theatrical agent), Staged is a fantastically produced show, more professional than most other Lockdown TV, from Dan Gage’s superb editing to Alex Baranowski’s whimsically jazzy score, and the writing by Evans and Phin Glyn, which is so clever and performed so naturalistically you often wonder whether its scripted at all, giving it the feel of a postmodern play. Evans and Glyn marvellously drop themes and dialogue early on that pay off by the end of each episode and/or the whole series, and even seemingly throwaway gags like a David Tennant mug and a daft theatre warm-up song are resolved in hilarious and often meaningful ways. Co-starring Sheen and Tennant’s real-life partners (Anna Lundberg and Georgia Tennant respectively, the latter of whom also produces) as well as Evans’ real-life sister Lucy Eaton, Staged is a family affair in the truest sense – complete with the quarantine-specific cocktail of passive aggression, pettiness and the pangs of affection true of loved ones living together in lockdown.

You feel in a decade’s time you could look back on Staged as a time capsule of this bizarre year – it captures the essence of what lockdown was really like, not just because the cast are plagued by the mundane scourges of lockdown life – home-schooling, monotony, general malaise of the soul – but also by intercutting with footage of deserted London thoroughfares, vacant supermarket shelves, teddies in windows and tributes to the NHS. Even production lines of loo rolls and the goats who took over the empty Llandudno! Sheen, Tennant and co often start their Zoom calls by staring melancholically off-camera, and Staged captures the awkward silences, the uncanny valley, the timing that’s just a bit off, about the medium of video conferencing. ‘We just need a focus for it,’ Tennant says at one point; he’s referring to their chaotic Zoom rehearsals but that’s a 2020 sentiment if I ever heard one. Focus is one of the many things in dwindling supply during this singular year, especially in the infamously fluid temporality of lockdown living, which renders the experience of time inconsistent and patchy (days feel like years, months fly by) which the show also captures.

For all it’s comedic brilliance, Staged doesn’t shy away from sorrow. There’s a subplot between Sheen and his next-door neighbour which goes from hilariously petty to genuinely moving, and encompasses the cloud of uncertainty that hangs over us all at this time. While Tennant claims he brings ‘charm’ and Sheen claims he brings ‘gravitas’, they each excel at both – as well as capturing that sense of defenceless inertia that is common to us all right now. And Tennant gets to sum up the collective malaise of the era in a wonderfully poignant monologue: “You just stop feeling useful, don’t you? The theatres close, audiences go away, roles dry up, you’ve got nothing to offer. You’re just hoping it’ll all be alright”. The series – and the year – has walked the surprisingly fine line between rage and hope. Sheen quotes Dylan Thomas’ famous lines, ‘Do not go gentle into that good night… Rage, rage against the dying of the light’, and David worries whether things will ever go back to normal.

One of the more subtle ideas in the show arises when Sheen comments in passing that, of all the things in the real world, he misses elephants most of all. A minute or so before this, Georgia explains that elephants in David’s play symbolise memory – so, for me, this was their way of suggesting that making memories is the thing we all miss most of all. “You’ve survived this long without elephants. You’ll manage,” Georgia tells him, and the audience. We’ll manage. We’ll get through. We’ll endure. The response of certain governments could indeed be described as a ‘cachu hwch’ (I’ll leave you to look that one up), but there are more good people in this world than bad, and in a time where fighting for our rights has become more essential (and more visible) than ever before, Staged is there to remind us that we will get through this – and that we can only do so together.

Staged is currently streaming on BBC iPlayer and Netflix UK.