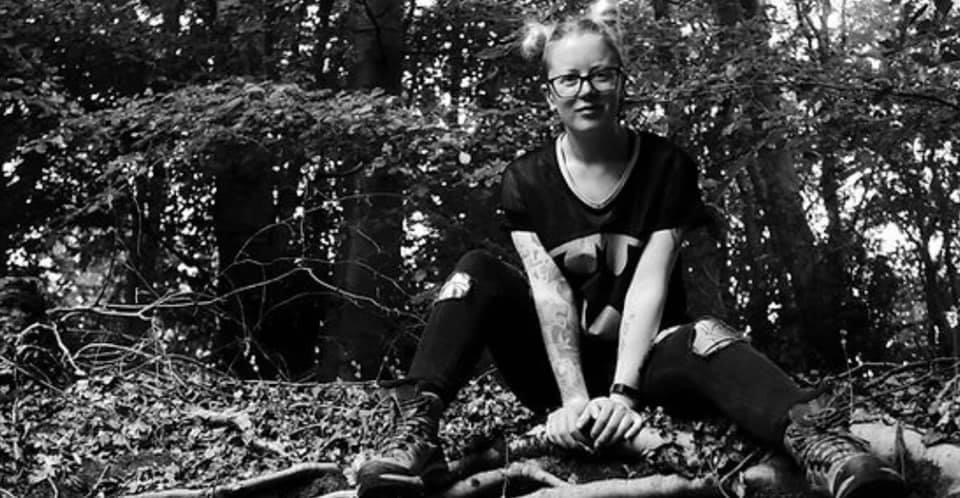 Gemma Connell is a dance artist based in Wales, whose latest work, footSTEPS, is a series of dance films in starkly different locations. Born in south Manchester and with Welsh ancestry, Gemma started dancing in her local youth club. She explains,

‘I come from a working class family and a very big family, certainly couldn’t afford dance lessons. So it was the youth club, it was things that were free that were there for me.’

She later went to Warwick University to study English literature, but found herself spending most of her time dancing and setting up shows. It was then when she decided that she wanted to devote her life to the arts. I ask her what dance is for her and she tells me,

‘Dance for me has always been therapeutic. It’s my way of processing the world, It’s my way of working through things that I find difficult. It’s a way of expressing myself when I can’t find the words.’

Used to moving freely, the lockdown in the spring brought a new challenge. She didn’t have enough space at home to dance, she tells me,

‘You try and dance and you’re gonna hit the coffee table. I felt trapped and I think footSTEPS was a way of trying to get that freedom back. Dance and dancing outside was a way of dealing with that.’

Once allowed to go over 5 miles from the house, Gemma and her partner Ian Abbott, who is the Director of Photography , decided to explore different locations and experiment making short dance films. footSTEPS thus became her escape.

‘I felt very free the first couple of times we tried to create these dance films. I suddenly found myself really excited about dancing again.’

The first season of footSTEPS is set in south Wales. The locations include Chepstow Castle, Wentwood Forest, a bus graveyard, an underpass in Newport, and a beach in the Vale of Glamorgan. In her dances, Gemma interacts with the features of each place and reacts to their different feel. Bringing contemporary dance into a castle felt like a meeting of two eras, while the bus graveyard had an apocalyptic feel to it. She says,

‘There’s something for me with being at a castle of one time meeting another. We film in this medieval space but I’m very much in modern clothes and doing this kind of dance that they definitely wouldn’t have done back then.’

‘The bus graveyard for me was quite eerie. It looked a little bit like the apocalypse. As if humanity had disappeared and everything had been left. It made me a little bit nervous that site. I think it comes across in the movement as well. There’s something about me trying to create a boundary, a barrier around me. I seem to be making circles around myself.’

In each film, Gemma improvises bringing together different dance styles to respond to her immediate environment; yet there is a consistency in her moves. I ask her what Covid made her realise about dance. She tells me,

‘The tactile nature of the way I work. I do a lot of contact work. Covid means you aren’t allowed to touch anybody or anything, that you’re not allowed to get close to people. As a dancer, I’m used to being in contact with people all of the time. I found that very, very difficult.’

I remark that in our everyday life we, non-dancers, tend to suppress movement. We are not at ease with our body. I ask her how dancers gain that confidence to express themselves through movement. She tells me,

‘The late Ken Robinson used to talk about this and I think he’s brilliant. He said that people are educated out of their body and into their heads. I really do believe that. I work a lot with young people. As young people, they get less and less comfortable with their body or with moving in a certain ways. I do think that that is related to an education system which is focusing on academic achievements. There are so many kinds of intelligence. I think dance is one of those kinds of intelligence. Embodied knowledge certainly is.’

For non-dancers, dance is something one might do in a club or a dance class. We do not dance on the street, in a park, or forest. Gemma takes her dance into the wild, into historic settings, and urban sites. She frees it not just from the confinement of lockdown, but from the restrictions our society imposes on dance. Movement is how Gemma, as a dancer, deals with life and expresses her emotions. We might do well to follow the example of footSTEPS and dance wherever and whenever we feel like it.

The films can be found here.