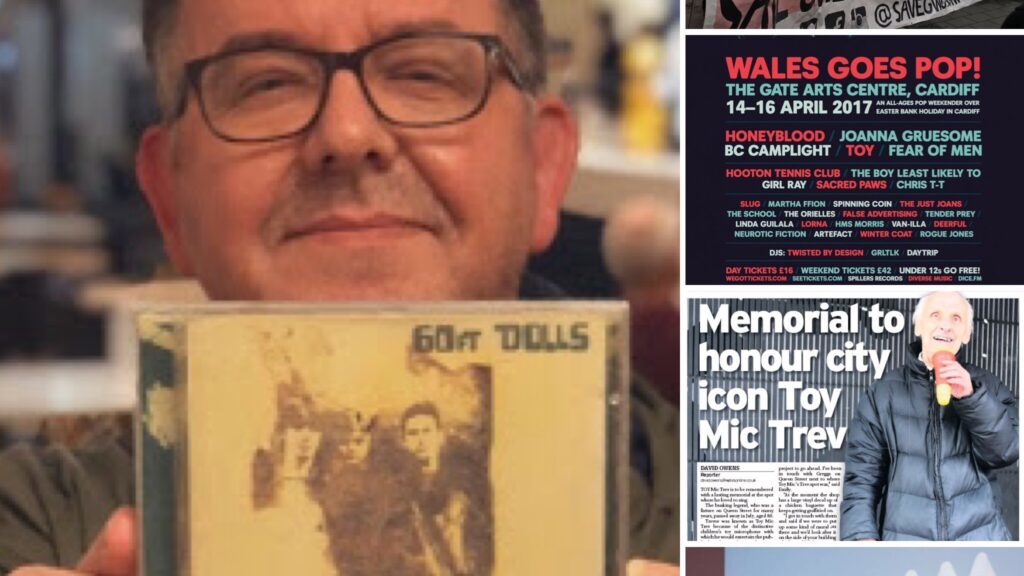 Get the Chance was extremely saddened to learn that journalist David Owens is being made redundant from his role at Media Wales. Dave’s championing of the arts, especially Welsh music has been hugely important for the sector. His unique voice has raised awareness of new music, discussions around class and culture, he has supported music festivals, fought against the destruction of music venues in Cardiff and has created heartfelt articles about Cardiff characters like Toy Mic Trevor!

In the article below fans and colleagues pay tribute to him and his work.

Dave Owen’s respect amongst the South Wales music family is well earned and his genuine passion for the music, and the individuals making the music, breathes through all his writing.

I believe I first met him around the time he published the Catatonia story – he might correct me on this – but I have a vague recollection of meeting and possibly interviewing him about the book, released in the year 2000.

Our paths would cross from there at a number of music gigs, events, panels, and anything music related in South Wales.

Dave is more than a journalist to me, more than a talented writer and music fan, he’s also a friend, and I look forward to seeing what the next chapter will hold for him.

The people I really connect with in music are those who just cannot turn it off. They devour music – new and old – in all its forms – recorded, written, live – and it’s between bands and bar at a gig that you usually become friends with the people that are particularly special. Dave is one of those people.

Possibly in Dempseys, probably in Clwb Ifor Bach, certainly late in an evening, with ears ringing from whoever we’d both been to see and hear, Dave became, for me, a solid, reliable, passionate part of the fabric of music in Wales. I got used to seeing him bouncing between bands, and I loved to see him. I always do. He’s a good guy. A funny soul. A trustworthy man who wears his heart on his sleeve. He’d give before he got, and he’d never take anything without permission and grace. For a long time his words were my only route into the Echo and The Western Mail where he’d write so enthusiastically about music. He became someone whose opinion I trusted. Through his words I’d go listen to some bands I’d never heard of. But more importantly I’d return to acts I’d skipped or dismissed for some reason that had felt right to me at the time. But If Dave was enthusiastic, then I would doubt my first instinct and give the band a second shot. He would often prove to be right.

When once just music and culture and art were all I cared for I began to get more interested in the politics and policy behind it. I’d share that with Dave, who increasingly became interested in it himself. I love those conversations and those debates we have.  He wasn’t just writing about music, he was – and is – part of the push and pull that makes things happen in Wales. He wants there to be more; for it to be better; for it to be fair. He’ll shout about it and write about it between the bands, over the bar, late into the evenings as only he can.

It’s sad to hear David Owens – Wales Online has been relieved of his duties from Media Wales.

⚡️ There is NO QUESTION that Dave has been a TITAN in Welsh Music Journalism since I can ever remember – his passion for this industry is something I’ve always been enormously enamoured with & he has supported me no end since I started. ❤️

I say it’s a HUGEEEEE gain for independent media…there are much greener pastures ahead for Ser’ David – and I can’t wait to see what comes next.

I Loves The ‘Diff

Many of us have watched with dismay at the decline of decent local journalism in South East Wales at the hands of a non-Welsh plc, yet amid the slide toward online lowest common denominator, catch-all, hit rate, click bate driven drivel was a rare stalwart – Dave. A man whose passion for the place in which we live, its people, and music (Music! Music! Music!) is tangible in his writing, his choice of stories, and the people and bands he celebrated. So thank you for the (words about) music, Dave. Looking forward to hearing about what comes next for you.

I got to know of David’s work through his love of music. His writing was always passionate interesting educational and real. You could tell it was so important to him and this was reflected in his pieces.

He is an important voice in Welsh journalism.  You could always hear his authentic voice in his words. Rare in journalism these days. I liked his societal take on  bands and music. He knows where it originates. A decent good guy that you could sit down and openly talk with. I shall miss his writings x

I call Dave a ‘mouthpiece’. He has spent endless column inches tirelessly devoted to covering welsh music; be it through reviews, previews, features, or simply highlighting recent concerns to our troubled sector. All of which has helped spread the importance of music. And never has that been more valuable than right now.

His kind words about our youth music development work have always been much appreciated. Whether inked through a feature in his “New Wave” segment or accompanied by a raised glass at one of our gigs, they have all been warmly received.

Illuminating the emerging music talent in Wales is something that we both strongly believe in. The young acts we work with, in particular, treat his music reviews with reverence.

At times like these, Dave’s honesty and passion for music are much needed. I have no doubt he’ll establish a new ‘mouthpiece’ soon and continue the important work he’s well known for.