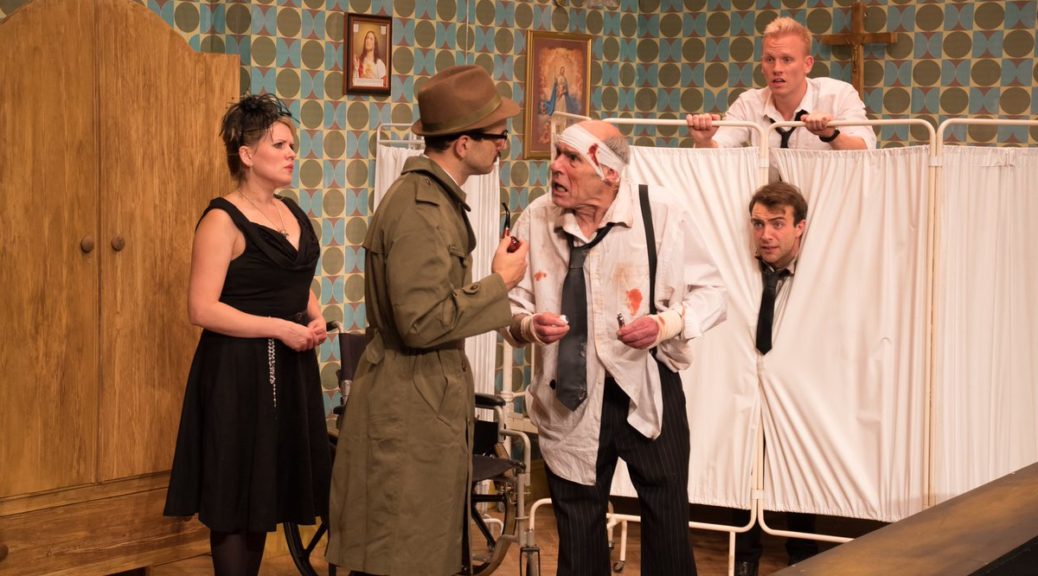 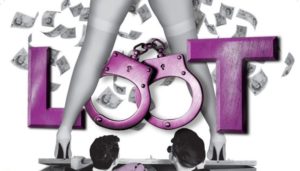 I’ve never really been attracted to Joe Orton’s work. I recall seeing revivals of  Entertaining Mr. Sloane and What the Butler Saw staged in London during the 1990’s and watching the filmed version of Loot on it’s original run in 1970 and a common denominator in all these black comedies for me was that they were just not very funny, annoyingly over-verbose and outdated.

So with a degree of trepidation, I ventured to my local Coliseum Theatre in Aberdare, to see Black Rat and Blackwood Miners Institute Co-production of “Loot” which is touring venues in Wales until the 10th November.

The plot revolves around two young criminals, Hal (Rick Yale) and Dennis (Gareth Tempest) robbing a bank located next door to the funeral parlour where the latter is employed. Needing to hide the proceeds of their crime quickly, they decide on hiding it in a cupboard in Hal’s house initially, and then inside the coffin of his recently deceased mother lying in state in the same room prior to the funeral. Throw into the mix a psychopathic nurse Fay, (Sarah Jayne Hopkins), with an eye for grabbing the inheritance through marrying the newly widowed McLeavy, (John Cording) and a borderline loony police detective Truscott, (Samuel Davies), and you have the ingredients of ensuing mayhem. 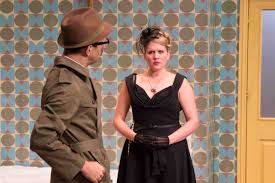 The premise is promising, but is let down by its unnaturalistic dialogue and relentless attempts to be witty that leave you shell-shocked and disinterested after a very short time.

Another problem is that the main character Truscott, an obvious caricature of Sherlock Holmes, meerschaum pipe to boot, is patently unfunny.  Orton created the part with Kenneth Williams in mind, and I can envisage that actor improving the part, However,  for other actors without the unique talent of  Williams’s  affected style of delivery, it is a thankless task.

Fay is an Irish nurse and the most memorable character in the play. Devoted totally to the accumulation of wealth, she has managed Mrs. McLeavy, (an obviously silent role played by Julie Barclay) to change her Will in her favour. Previously married seven times, all her deceased husbands have died violently and now she has her claws into McLeavy.

McLeavy himself, the most moralistic character is a devout Roman Catholic who at first chooses not to believe that his son Hal is a bank robber.  He is torn between paternal responsibility and his religious conviction.

Hal, a product of his parents’ upbringing is incapable of lying, and this does lead to some slightly amusing moments. His friend and co-bank robber Dennis is a ladies man with an eye for snatching Fay, an attractive target as she had nefariously accumulated a degree of wealth.

Orton is targeting the accountability of the police force, exemplified through the sneaky and violent behaviour of Truscott. Orton, as a gay man at this time, (1960’s), had a history of bad experiences at the hands of the police and The Law and had an axe to grind. Famously, he was imprisoned for criminal damage to library books. His severe prison sentence probably down to his sexual orientation. He also has a go at the Roman Catholic Church  and middle-class society.

Orton reminds me of an earlier generation John Lydon, (Johnny Rotten of The ex Pistols) in his relentless quest to shock. He was always running into difficulties with the censors, and Loot was a case in point. However, what passed as shocking and controversial back in 1965 when the play was first performed, is passe sixty years on. I can remember the 60’s well enough and references to events and the way of thinking at that time does bear resonance, but I wonder how a group of schoolchildren that were present in the audience would find any degree of connection.

As for the production team, they make a pretty good attempt at making this redundant play accessible. All the actors have a decent body of work behind them and are collectively strong. The pick being Sarah Jayne Hopkins’s Fay – a lively portrayal with great vocal variation.

Director Richard Tunley creates a brilliant opening to introduce the characters, relying on a protective hospital screen doubling up as a cinematic screen to show an extract taken from a 60’s B-movie bank heist. It then is used for the concealing and exposure of the characters in an inventive way. This certainly caught the audience attention and I looked forward to more examples of this to come. Alas, that was not to be, and the remainder of the play is directed in a traditional way and is the worse for it.

This production makes a valiant attempt to resurrect a moribund play, but overall, you feel it should be resigned to accompany Mrs McLeavy in the centrestage coffin and buried in the cemetery of extinct drama. I can’t help wondering, whether Joe Orton’s work would still be exalted by some if he hadn’t died so young and brutally.