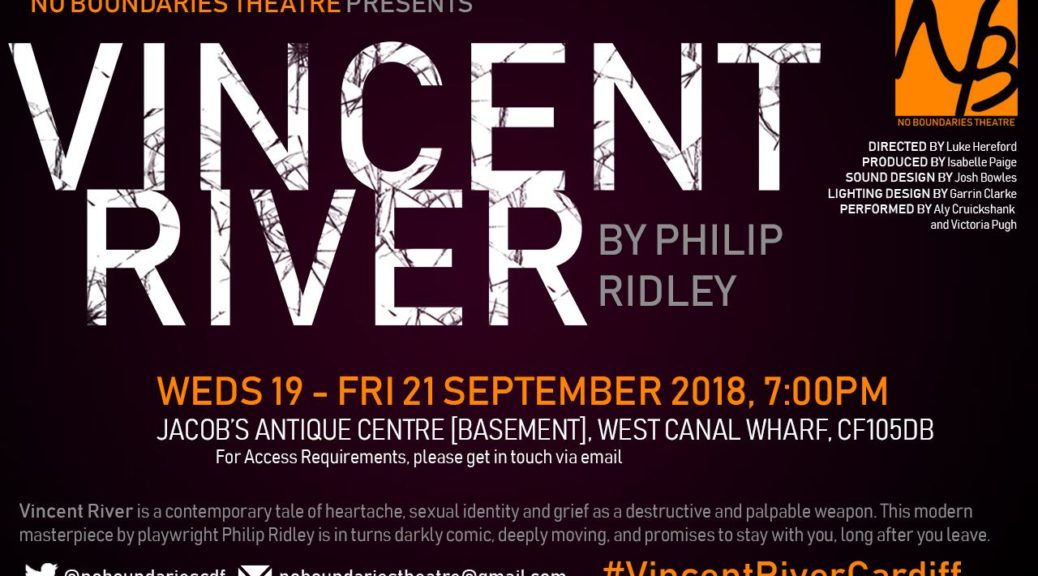 Philip Ridley’s acclaimed one-act 2000 play, “Vincent River” tells the story of a mother whose son Vincent has been murdered in a homophobic attack. In the aftermath, she learns about her son’s homosexuality.

It is directed by Luke Hereford  (Sherman Theatre Director’s Programme).

I posed the following questions to Luke ahead of the performances next week in Cardiff.

Q1. What drew you to Directing “Vincent River”?

Philip Ridley is a writer who is instrumental to the shape of contemporary theatre, and played a huge part in making theatre available and accessible for a number of new audiences by addressing some often controversial issues that a staggeringly large number of audiences can directly relate to. Vincent River is one of those plays. Like lots of Phil’s plays, it puts taboo opinions and subject front and centre, and demands the audience to sit up and listen, through the means of darkly beautiful poetry. That is everything I look for in theatre.

Q2. The play is set by writer Philip Ridley in Dagenham, an area of longstanding homophobic prejudice. Do you retain the location or do you change it to Cardiff?

We have been lucky enough to have Philip Ridley’s direct support of our production. He actually suggested changing the location to Cardiff. He said he thinks it’s important to remind audiences that the events of this play aren’t exclusive to London, so we’ve decided to relocate it. We also think that there’s something especially chilling, for Welsh audiences, about hearing street names and locations that they recognise.

Q3. Coming out of Q2, due you think there is a homophobic problem in Cardiff above the average, and is enough being done to combat this?

I don’t know if it’s Cardiff-specific, but in the last few years, I have found in my personal life the occasional comment or word in public situations aimed at me – particularly if I am with my partner – that I haven’t encountered, probably since I was in High School. It’s not that I feel unsafe, but I think there is less encouragement – due to certain world leaders – to be accepting of everyone. In terms of combating it, I’d like to think that by making people aware of such casual marginalisation, and where it has the potential to lead, the play might help to at least continue conversations about modern day homophobia and prejudice.

Q4. What difficulties did you encounter when producing this play?

We are uncovering a lot of themes that we hadn’t anticipated might be present, which is a gift more than anything; there is a delicate balance in terms of being aware of when to draw out the right themes, but we have been very gifted with our actors. Victoria Pugh and Aly Cruickshank are just a joy. They are intelligent and instinctive, and are vivid storytellers, which is exactly what this play requires. I feel so privileged to be working with them.

Q5. Philip Ridley is a pioneer of “In-yer-face” theatre, which emerged in British theatre in the 1990’s. “Vincent River” being first performed in 2000 to critical success. Do you think that this “brand” of theatre is as vital twenty years on, and how do you think our next Brit-style theatre will develop out of it? Or will it go in a different direction?

I think it’s clear that the shock factor of In-Yer-Face theatre has certainly subdued, but actually, it makes these sorts of plays pertinent in a very different way. I saw Shopping and F***ing at Lyric Hammersmith, just two years ago; it’s a play with themes of prostitution, sexual abuse, drug use, consumerism – to name a few – and seeing it in the age of Amazon and Netflix, when everything is instantaneous and transactional, the play had a very different feel to what I imagine people who saw it at the Royal Court in the late 1990s would have felt*. Something like Vincent River continues to remain pertinent, because fundamentally it’s about hate. Sadly, for that reason, I imagine there will always be a level of relevance within the play, and right now it feels particularly urgent.

*I saw this production, as I did Sarah Kane’s “Blasted” in its first week and they certainly left a massive impression on me.

Q6. Jacob’s Market in Cardiff, the venue of your production, is an unusual choice. Is there any reason for this?

Well, we wanted somewhere that was almost site-specific. I originally viewed to perform it in a living room, or someone’s basement, and then I found the Basement in Jacob’s sort of by accident. It instantly felt like the kind of space that Philip Ridley would write, and it all slotted together perfectly. You really have to see the space to know what I mean!

Clearly, “Vincent River” is as important a play now as it was nearly 20 year ago, and the promise of an interesting pace to view it,  makes it even more appealing.