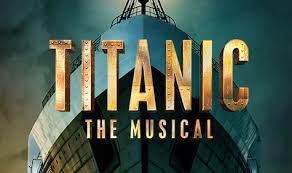 At first sight, and if you didn’t know any better, the idea of Titanic The Musical might sound a little off-key. The most tragic maritime event in history being told through the medium of song? Well, that’s what I thought but then I did a little digging (thank you Mr Google) to find this musical is not what you first think. It’s nothing to do with any Celine Dion song (thankfully, my heart can go on), nor Jack and Rose, but at its heart it tells the story of a ship and the three classes of people that boarded, each with their own hopes, dreams and reasons for wanting to go to America.

There are four couples the story highlights, one from each class – first, second, third, plus another couple who were first and are now second, together with the hierarchy that was the captain and crew. Sometimes in review it’s easy to avoid the ending, for obvious reasons on this occasion you should know already. If not, google it.

This musical though is something special, having won five Tony awards in 1997 including best musical, it’s the kind of musical that’s seemingly rare these days in terms of how it’s written and performed. It feels like a classical musical opera, and I think for some people, this might be a little bit of a stumbling block. But if you stick with it, it has the power to move you in ways you don’t really expect.

The sound that filled the auditorium is immense, not just the voices, but everything. The orchestration, and the general feel of the piece. Act one is all about introducing each character and their place on Titanic, this takes us to the end of act one and the iceberg. The first half of act two is then a frantic nonstop piece as the ship slowly succumbs to the Atlantic.

There aren’t any star names in this musical, not that I realised anyway, but that just means the entire cast are the star of this musical. They tell the story with heart, compassion and an amazing all-round performance.

Whatever version you know of Titanic, be it the James Cameron film, or the ITV miniseries, it all comes down to a story of humanity, and how people can be flawed, and how some love stories don’t have happy endings.