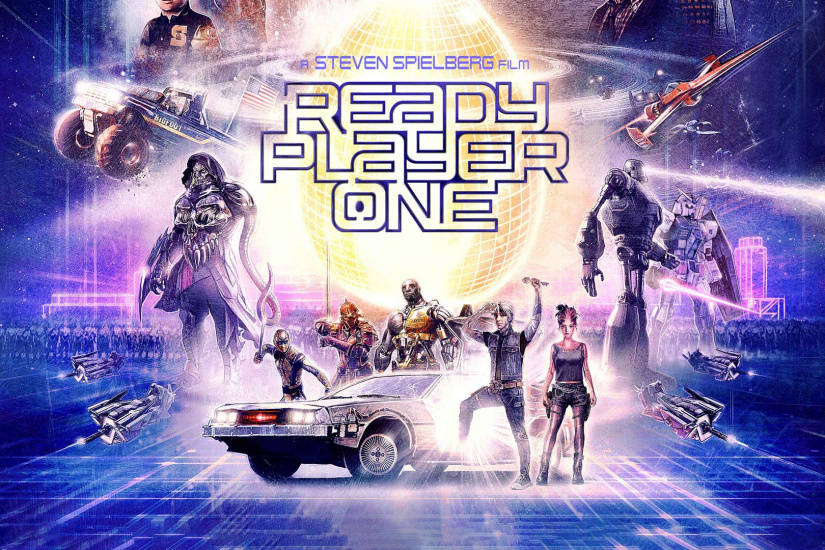 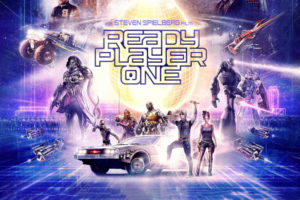 “Hey, that’s *blank from so-and-so. I love that movie/game” “Ah! They quoted/referenced that movie/TV show I love!” This is the reaction that Ready Player One seeks to get out of you with every moment it has onscreen. It pulls from so many pieces of instantly recognizable pop culture that there will be something that everyone will be able to recognize, whether it be a character walking by, a vehicle, or a line of dialog. Yet it has almost nothing to say or do anything inspiring with said big toys at its disposal. The experience is only surface deep.

We see a future where the rich have gotten richer and the poor are indeed poorer. Trailer park neighborhoods are in abundance but so much so that they are stacked up high on top of each other. It is a gray, muddy place to live and is not the hardest thing understand that people would want an escape. So they go to The Oasis, pretty much the internet that you can virtually enter. Our guiding character for the story is a young man named Wade Watts (Tye Sheridan), that just wants to get to The Oasis as fast as he can each day and search for the great McGuffin that exists there.

The Oasis was created by a man named James Halliday (Mark Rylance) and the great programmer was also a big aficionado on pop culture and hid three keys in this world that will allow the owner of all three to take a final test and become the owner of The Oasis.

An undeniably strong element to the movie is its worldbuilding. Worldbuilding is the construction of a fictional world and how it operates. In bad worldbuilding, it doesn’t make any sense and you are just left with questions, good world building you understand how it operates and has a solid grasp on how you would live in it. Because The Oasis has become so integral to life everyone logs in and when they win games they earn coins in the game that earns them money in real life. They can buy equipment that allows them better reflexes in-game and feels the touch of the world itself, also ordering stuff.

What bothers me greatly about the way the world is conveyed is that there doesn’t seem to be anything nourishing to the art. I believe that real art, be it cinema, literature or music exists to enrich those who consume it in some way. The world portrayed before us it seems like it’s just about seeing all high-status pop-culture movies out there and memorizing every facet of it, nothing about what it means or how it has shaped them as people. This is a world where the people can make anything, yet they all they do is recreate someone else’s creations.

A fundamental flaw as the movie was playing out is that Halliday is revered amongst the people in The Oasis, they have learned everything they can about him, his favorite movie, favorite pizza topping, quotes he lived by. He made a list of every movie he ever saw and when. I don’t think they realise how sad this man is. He lived his whole life alone, apart from one friend who he eventually kicked out. This is a man to learn from by avoiding all his mistakes.

As a movie what this offers is the chance to have nearly everything that is classic popcorn, crowd-pleasing entertainment. There is a race scene, martial arts fight, shootouts, dancing, sneaking around etc. Of course Speilberg is one of, if not the, greatest living visualiser working today and he clearly and effectively brings them to life. It’s just that it lacks a should because I feel how empty it is, I wasn’t invested in the characters goals because I just wanted them to log out, get outside and read a real book, see the sights and interact with actual people.

If this was an episode of Black Mirror or handled by Satoshi Kon then it would probably be taken to a much darker and interesting place. Truly examining why humanity rejects the real and takes comfort in the artificial. But this isn’t either of those and is only here to push your joy button.

Going into the big battle near the end I did start to feel a connection for the characters and understood that there were real stakes. Remove all the characters from movies, TV shows and video games and what you have is a well-composed battle where you understand the geography and key players bring contribute different things to it.

In the end, the message for this movie is that you should maybe spend a little less time dwelling on pop culture and spend some time in the real world and form actual relationships with people. Duh! I don’t need a movie to tell me that and it should be so intrinsically built into us that we shouldn’t need to spend over one hundred and fifty million dollars to make a movie to project that message.

In the end, I want so much more. I’m not against or even above being charmed by references, far from it. But I want them to take the essence of those precious moments I love and channel them into something that can stand on its own. This shows a world where originality seems to have fizzled out and all we can do is regurgitate the same.

For a movie with a similar premise but with much more depth and heart, I point you towards Mamoru Hosada’s Summer Wars. This, there is a good chance you’ll be tickled by all the appearances but everything else is so shallow.