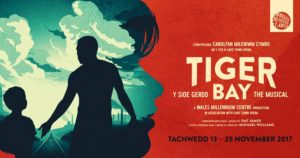 (The review below is from a preview performance, accessed through Spice Time Credits)

So off I went out out (no slippers) for my first Spice Time Credit spend in several months. It was so good to get out, I’ve been bit unwell again, just coming through the other side, treats like this make recovery fun and what better way than to go and see a fab new show like Tiger Bay The Musical  with friends and family thanks to Spice Cardiff and the Wales Millennium Centre. 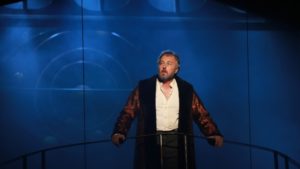 Tiger Bay is a beautifully crafted musical based in Cardiff around the boom time of the coal industry. Its about the people who lived and worked there, tales of love, hardship, hope and tragedy (be prepared to experience a gamut of emotions). John Owen Jones voice is commanding and lyrical, it was so lovely, Dom Hartley Harris voice is like velvet, ‘Ianto’ is played by a little star to be and Noel Sullivan got the best boo as a baddy I’ve heard since I saw the Baron in La Traviata. 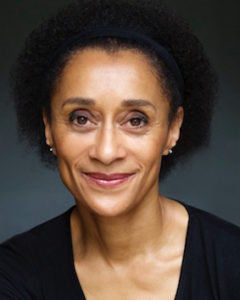 Suzanne Packer back to a Kairdiff accent as not seen on Casualty was excellent, her part induced some lovely giggles and we forget at times the lady is an accomplished and talented singer, an excellent performance by all.
The staging itself is incredibly clever, with a few set pieces that move and it immediately changes the scenery and ambiance, one minute you are on a ship by the dock, the next inside a local hostelry and the next inside a castle. 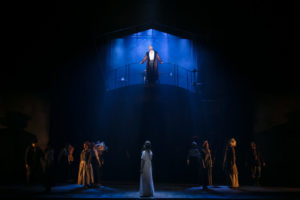 I think my favourite part was the stage lighting, I certainly applaud the director/designer of that, the intense lighting/spotlighting and placement of the actors and other players induced dramatic silhouettes (the smoking lady in Morgans) or made it seem like there were three times as many people on the stage, (triple shadows), the sinister giant stretched shadows in the darker scenes, it was an excellent bit of staging.

The choreography and choral arrangements and orchestra were amazing, some parts where you have a three different singers I think its called polyphonic chorus, didn’t always work for me and I lost the story but I soon caught up, however you cannot deny its very clever and brilliantly technical and all credit to the professionalism of the cast and indeed the very young cast that these choral sections were so superb.
So any negatives?, I have to say yes, it’s slightly too long, I’m disabled and sitting for three hours can be uncomfortable, I was getting quite fidgety towards the end, not because I’d lost interest, but because I had a numb bottom and a complaining hip. I think some of the linking to scenes was tenuous and some overlong, but really its a tiny complaint and did not deter my enjoyment of the show. I truly recommend you get a ticket to go if you can, it was a really lovely evening, whats not to enjoy about being entertained by a well written show performed by talented people?
Bravo, I say Bravo! 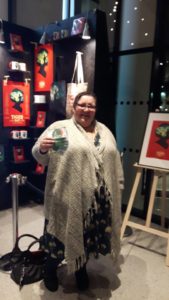