Probably to the shock and awe of everyone when we got another iteration of the My Little Pony franchise it’s standard of quality was higher than we expected but it also gathered a large audience from not just little girls but boys and not little boys elderly men. They are known as Bronies, so the show had an extra audience that they probably didn’t count on. I know about this because I am one.
Our main group of characters are (bare with me, these names are real I swear) Twilight Sparkle (Tara Strong) the book smart but also neurotic and worrisome, Applejack (Ashleigh Ball) the hardworking, salt of the earth type, Rainbow Dash (Also voiced by Ball) the hot-headed enthusiastic one, Pinkie-Pie (Andrea Libman) the colorful, bouncing, party obsessed funny one, Fluttershy (Also voiced by Libman) the shy, delicate one who will be the last one to start or join a fight, Rarity (Tabitha St. Garmain) the fashion obsessed fussy one and finally is Spike (Cathy Weseluck) the little dragon who is always there for support. These are the typical archetypes that we’ve come to know for a group dynamic but they work here because they’re still distinctive from the other archetypes, few are as mad and fast talking as Pinkie Pie, or quite as intricately paranoid as Twilight. Reusing a formula is OK as long as you make it distinctive, which they do here, so there’s still something to connect and remember.
For the plot our group is gathered together for a special celebration, all is happy and going fine but a dark cloud approaches and from it emerge invaders that take the castle. Our heroes escape and now need to travel the lands and find allies.
The animation is an upgrade from the show, having much wider and detailed range of expressions from the characters as well as wider shots along with more sweeping movements from the camera. None of this is able to compete with Disney, Dreamworks or Ghibli but who says it has to? The show has its own style and it gets more effort put into it here.
This is is up there with one of the most vividly colourful movies I’ve ever seen (equal with Trolls). There is every single bright colour used here, from primary’s to others like turquoises, fuchsia and creams. But it never becomes saturated because each character has their main colour and the backgrounds are distinct so even if you squint you will know who is who. This is a good use of the tool.
This is a musical adventure. Though I must say that the songs are the weakest part of the movie. I can’t recall one of them from memory. They play at moments of plot-points or to expediently have a character tell you a lot about them. They may have other young fans singing them and buying the soundtrack but these aren’t the high-points of the movie.
For the big screen they gathered celebrity casting as you’d expect. The names are impressive with names like Zoe Saldana, Liev Shreiber and Michael Pena as-well as others. But they all fill their roles very well and are not distracting. These are actors that know how to be behind the microphone and create a character using only their vocals. Probably the biggest is super star Sia, essentially playing herself as a big musical star.
The main antagonist Tempest is easily the best part of the movie. Her darker colours contrast the others as-well as the world. The animators clearly put in effort with her facial expressions, most prominently her eyebrows. Emily Blunt puts on an American accent flawlessly and enjoys sinking her teeth into this no-nonsense, very fearsome threat.
For young children this movie will definitely entertain as well as comes with basic but fundamental lessons. For the older fans (which do exist) they will be glad to see their characters on the big screen in a bigger scenario. But the true appeal of the movie is probably what got young girls and older males to become fans, it has a distinct and undeniable charm.
Hanazuki Review 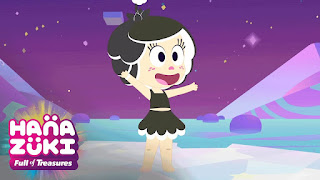 The opening short for this movie is a journey of colour, imagination and friendship. it is actually doing all the movie seeks to do and does it better.
It is instantly accessible, charming beyond belief and tells a full story. I would be glad to see this again as well as have it shown to children.