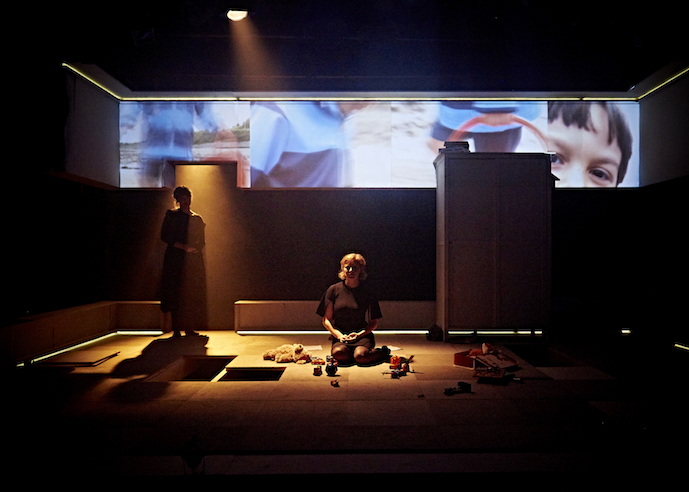 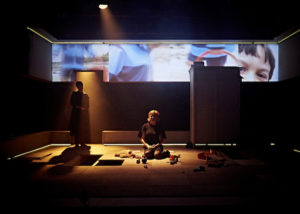 Well, hold on to your hats theatergoers! Little Wolf by LUCID theatre company is going to shake you up a bit.

Little Wolf written and directed by LUCID’s founder Swansea-born Stephen Harris, is a reworking of Ibsen’s classic 1894 play Little Eyolf. The action takes place in contemporary Norway and the dialogue reflects that with references to Facebook and GPS for example.

It is surprising, when considering 21st-century attitudes  that Ibsen was a very provocative writer for his time and often felt foul of censorship and Victorian prudity. Simon Harris revitalises Ibsen with his “in yer face” treatment. Subtleties that you find in Ibsen’s play regarding the very close relationship between supposedly half-siblings Freddie and Asta, is transformed to Rita asking her husband,, “Did you fuck her?” No question of  ambiguity there.

Ibsen wrote Little Eyolf in 1894, late on in his writing career, and at a time he was moving away from Naturalistic to Expressionist drama. This is a very expressionist production. It purveys an atmosphere which is both dreamlike and nightmarish. The starkness of its setting, the plot and structure is episodic , the expletives in the dialogue and the acting bordering on overacting at times are more closely linked with Strindberg than how we think of Ibsen.

Little Eyolf, compared to other Ibsen classic drama, is not performed as often as “A Doll’s House”, “Hedda Gabler” and “Peer Gynt”. The one recent exception that stands out is Richard Eyre’s Almeida Theatre 2016 production which The Guardian’s critic Michael Billington described as “shockingly intense”. That’s where the problem lies in terms of its comparative rareness of performance, as it is a very demanding play to watch. Demanding in terms of its emotional ferocity.

At the start of the performance, the audience is greeted with the sounds of birds tweeting and children playing. The stage design is basically simple but works very effectively. It consists of children’s toys scattered centre stage with the most prominent item being a child’s railway set. A wardrobe is placed upstage left and this plays a very important part in the story later on. Upstage right is the only door. A stool is the only other significant object.  The lighting is used very effectively, sometimes evoking the dreamlike atmosphere that I have already alluded to.

Attention to detail has been paid in terms of the selected music – Norwegian children’s songs and rhymes, and the  wearing of contemporary Norwegian casual attire. Both contribute to creating a sense of realism that the action is taking place in Norway.

One of the features that I particularly like was the use of a Robert Lepage-like video screen projected the entire width of the stage and located upstage, which is used often at the end of a scene. An example of this is underwater scenes after the announcement of Eyolf’s death by drowning. Another time is was used when Freddie was reminiscing with Asta some childhood experiences which had a young boy and girl playing in the background on the projected screen.

I also like the symbolic way the railway track was slowly being picked up by Freddie after Wolf had drowned. Railway tracks symbolise a journey and the retrieving of Wolf’s toy represents the ending of his life’s journey.

Symbolism also features, (as it does in the Ibsen play), in the use of water-lilies to indicate rebirth and regeneration. 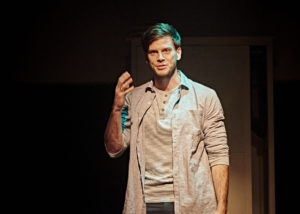 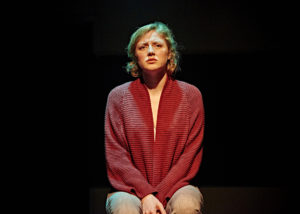 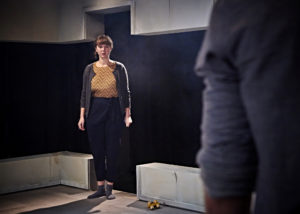 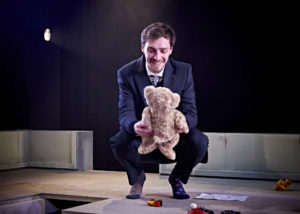 Lasting only 90 minutes, Little Wolf is roughly two thirds of the duration of the Ibsen play. Inevitably certain elements of the story have to be left out. The most dramatic departure is the absence of the important role of the Rat-Wife, who is only mentioned in the third person in the Little Wolf version. The character is based on the  Pied Piper because she has charmed all the rats in the locality into a boat and drowned them in the fjord. The comparison between the unwanted rats and the unwanted Eywolf is clearly apparent.   This part is a great opportunity for a character actress as exemplified by the lauded performance by Eileen Walsh at the Almeida last year. Ibsen wrote ambivalent roles; he wasn’t one for archetypes. The Rat-woman helps to show this ambivalence, but Simon Harris manages to capture this within his script. Rita is a case in point. At times she is monumentally sarcastic to Freddie, although he undoubtedly deserved it. She mocks his writing about orcs and other monsters when later she praises his artistic talent.

The sexual tension is considerably more explicit in the Little Wolf production. Nothing is left to the imagination. In fact the strong language does become a little grating at times and I felt that a little more restraint wouldn’t have softened the power of the dialogue.

Such restraint was more apparent in the interaction between Freddie and Asta which reveals their complicated relationship.

Lars’s character transforms Little Wolf into high farce in places, and I am not convinced that this sits comfortably with the intensity of this highly charged play. Having said that the scene where Rita is trying to have sex with Lars up against the wardrobe where Freddie has retreated, when interrupted  by the arrival of  Asta is highly amusing.

Fundamentally, the story remains intact. The guilt felt, primarily through the incapacity of Freddie and Rita’s baby son, through an act of negligence whilst pursuing  animalistic sexual urges had taken their mind of the safety of their boy and continued after Wolf’s drowning. Freddie’s dramatic decline afterwards, retreating into his own world, hiding away in the wardrobe.  His searching for something symbolised by his systematically tearing up the stage – searching but not finding until Rita’s triumphant rationalisation of their situation in the final scene. 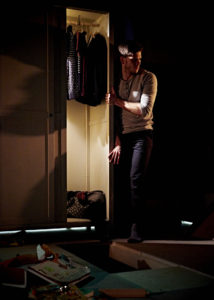 “LUCID makes vivid, urgent must-see theatre..” the playlist boasts, and this is fulfilled in this production.  The concentrated power, relentless, austere, urgent nature of the Ibsen play has been retained in Little Wolf. People today should be able to identify with the issues that Freddie and Rita face, and, although not perfect in its delivery, I can certainly recommend it to an audience, I guarantee will not be bored.

For ages 14+ for pervasive language throughout and strong adult themes.

The show tours South Wales during late October and November 2017.

For venues and timings please see my preview at https://getthechance.wales/2017/10/18/preview-of-henrik-ibsens-little-wolf-by-lucid/