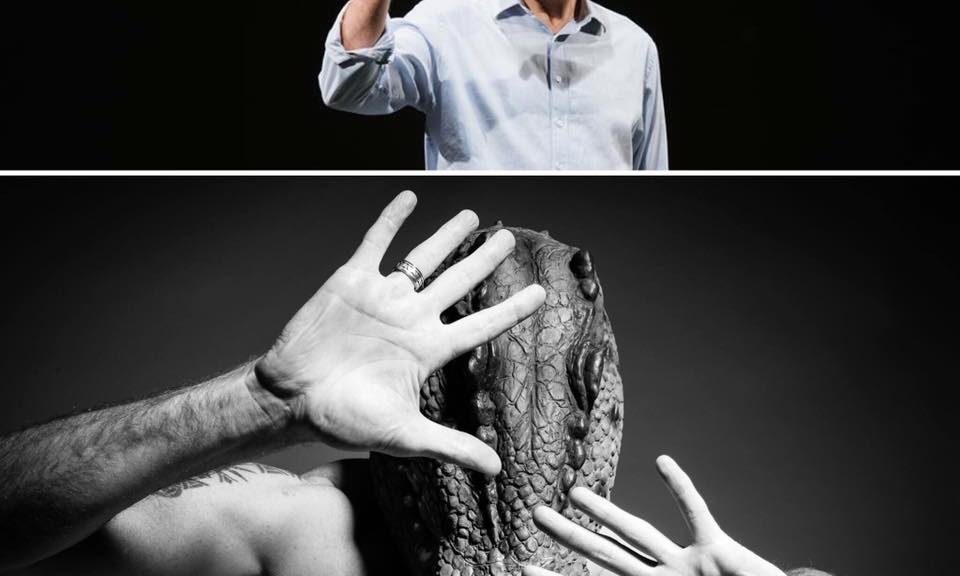 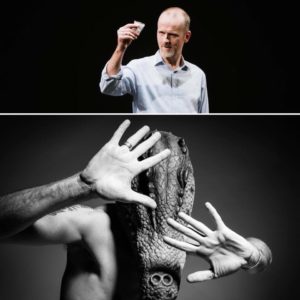 Hi Gareth pleased to meet you. Can you please give our readers some background information on yourself and your role in the arts in Wales?

Hello… I’m Gareth Clark and I work with Marega Palser under the name Mr and Mrs Clark. We make theatre performances and community art projects to share some of our thinking about the way we live and interact with our surroundings. The Clarks have been making performance work since 2006 and we are constantly trying to develop the way we make work so that it is surprising or engaging in different measures…. If that makes sense.

Thanks Gareth, can you tell us about the work your company is taking to this Edinburgh Festival Fringe?

(F.E.A.R.) is a solo show. It’s the first time we’ve produced a solo piece of work and it came from the research I’d done during a Creative Wales Award. It’s an autobiographical show that examines the multiple layers of fear used to control us in childhood and in our adult lives. It’s a direct and sometimes revealing account of how public information films, like those warning us against strangers, and news accounts of terror attacks constantly feed a wariness of other people. How distrust and fear perpetuate loneliness. It is a direct confession of fear from a man conditioned never to talk of such things and I think this opens up the debate about men’s mental health and our willingness to discuss our inner most feelings.

Why is the support of Arts Council of Wales, Wales Arts International and British Council Wales so important?

Edinburgh is a competitive place. The very best are there and it costs a lot of money. The support is essential to help offset some of the risk companies take. However the opportunities are great. Four weeks at the fringe is like a years worth of business in one short hit. The number of people, promoters and producers attending make the festival an essential part of the calendar. Recognising that Welsh companies should be represented makes a lot of sense as the opportunities that are created beyond the fringe are excellent.

The festival features a huge range of productions and there is great deal of competition for audiences, why should audiences come and see your companies work?

That’s a good question and one that we have to constantly ask ourselves. This show. (F.E.A.R.) is a timely reminder that we are being manipulated through some of the press and political powers. There is a strong suggestion that uncertainty and fear allows governments and certain politicians to push through strong and divisive mandates. We’re seeing it across the world and we see it more and more in this country. I think now is a prime opportunity to talk about fear so that we can start discussing hope. However there is a strong lobby that thrives from chaos and war and that is something we have to overcome.

Welsh artists and companies will be showcasing a range of art forms including theatre, new writing, site-specific work and contemporary dance. In your opinion is there anything that is distinctly Welsh which links them?

I’ve not seen all the work. What I always get from watching Welsh companies is the incredible sense of passion. I think Wales has a thriving theatre scene that goes somewhat unnoticed… I think the same of the North East of England too… and I believe it’s time to shake the system up a little.

I’ve been so head down working and trying to sell this show I’ve barely looked at the programme. However I would always recommend what Dirty Protest are doing and I particularly like the writing of Alan Harris. I think Revlon Girl will be on our radar as would fellow Newportonians Flying Bridge. At Zoo venues this year Liz Agiss is performing Slap and Tickle and it’s a real gem of a show. And whilst in Edinburgh I can never resist seeing Stewart Lee who never fails to delight in a subversive masterclass of comedy and Mark Thomas is always inspirational. 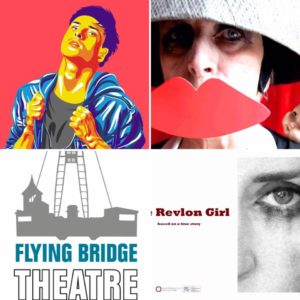 There is always something to do. The morning is generally social media hype. Selling, prompting, reminding, sharing reviews online. Then we take to the streets and hand out fliers for the show usually picking our some key spots or performances that we think liked minded people might attend. The great thing about Edinburgh is seeing loads of shows. We will go to something everyday and sometimes see as many as five shows… supporting other companies in the hope they will do the same for you. Eating and drinking is added to this with some sleep but that how the four weeks will shape up.

And finally what’s the best Fringe show you’ve ever seen?

There are so many. In 2015 it was On Track – Kristien De Proost at Summerhall. She ran for 70 minutes on a running machine whilst directly addressing us and changing costume and shoes. It was mind blowing, life affirming and challenging. I went twice. 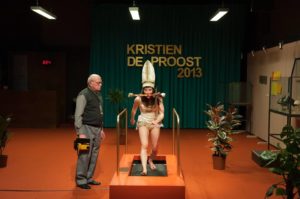