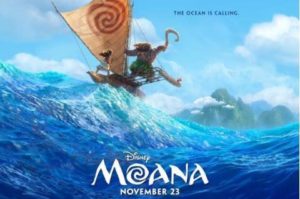 Disney movies have been for the family since the companies beginning. But they have mostly been for a Caucasian audience. In recent years companies have realised that there are other types of people and have striven to represent more of the many different types of people inhabiting the world.

We get told that there is the god of islands Te Fiti that created the islands of the world, when one day the demi-god Maui steals her heart, this starts the spreading of a great evil that will devour all life on the planet eventually. Years later and the events have become legend and on an island a tribe lives in perfect happiness. However despite this the chiefs daughter, Moana, feels the ocean calling to her, for her whole life despite the fact that the island has everything anyone could want she is beckoned to leave for something else.

Eventually the corruption reaches her island, so she must leave and restore the goddess heart with the help of Maui. And so out hero’s quest begins.

Mona is our latest instalment for female Disney leads. Whether she is technically a princess or not is debatable (even in the film), but she will indefinitely join the brand in future. But she is like many of her predecessors, an energetic, spirited girl that has what would seem like a perfectly acceptable status quo but there is something about her nature where she yearns for more. The great technical achievement with her is her face, whatever inner emotion she is going through her expressions convey them perfectly clearly, so much so that her dialog is rather throw-away. However the person doing her voice is also a great treat. Auli’i Cravalho infuses Moana with the authentic energy we need to like this young woman, she is a genuine teenager so she has that unique quality to her voice that is nearly impossible to replicate by older actors and she is able to handle any emotional scenes she has to from distressed, the comedic to emotional.

Mawi the demigod is played by Dwayne ‘The Rock’ Johnson. The Rock is an extremely charismatic actor that is the perfect fit for this very larger than life character. He comes with a unique visual gimmick that whenever he accomplishes a great feat he gets a new tattoo on his body and one of the tattoos of him can move and express (possibly his subconscious, I don’t know).

Also along for the quest is Heihei, a rooster that is as intelligent as any other rooster. He serves as the animal comedic relief, because this is an animated Disney movie, there must be one.

Ron Clements and John Musker once again take the reigns as directors on a Disney movie. They kicked off the Disney renaissance with The Little Mermaid and went on to make Aladdin, Hercules, Princess & The Frog and now they’re back with their first C.G.I. movie. They understand how to handle a Disney property, they must be entertaining for the whole family so there needs to be something that all the age-groups will like and then must be tied together as the finished product. Something that’s taken over from when they did Hercules is the use of flat graphic animation.

For this project Disney recruited Lin-Manuel Miranda as one of the songwriters. For those of you (I am one) that are enjoying the phenomenon that is Hamilton this will be very exciting for you. Every song in the movie serves to either broadly convey emotion or compress story information at an extremely efficient level. There are no songs that are simply the character making breakfast, the songs mean something. He is a natural words-man, able to craft intricate lyrics that stay on point, rhyme and are funny. My two favourites are “You’re Welcome” Maui’s self-indulgent song about all his great feats, and “Shiny” also a self indulgent song by the villain (a giant treasure covered crab named Tamatoa) about how it only matters whats on the inside, plays like a 70’s pop song by Jermaine Clements.

This is Disney, I feel its pointless to sing its praise of how well this is animated, it has the best people in the world working for them and have a more than capable budget. It is beautiful, with lush colors and textures. But what I want to bring up is the delicate balance they strike in representing the ethnicity and culture of Hawaiians while not being offensive. This is a cartoon so they have to exaggerate but not so much that it becomes a warped and disrespectful.

Much like The Little Mermaid this marks Disney studio doing what they do best while at the same time trying something new with its asthetic. Songs, characters and brilliant animation for the whole family, this is a Disney movie.