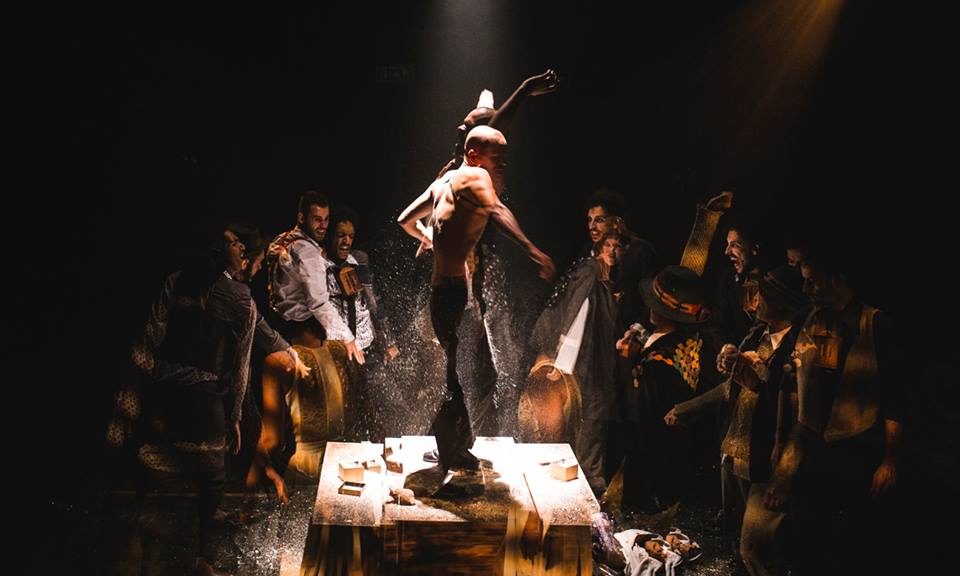 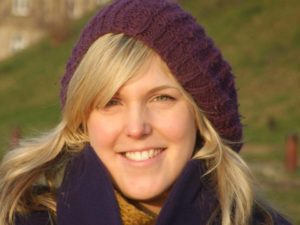 It’s now six years since Gary Owen’s play Love Steals Us From Loneliness was commissioned and performed in National Theatre Wales’ inaugural production year of 12 shows in 12 months in 12 places all across Wales. The production was staged in Hobo’s, a nightclub in Gary’s hometown of Bridgend in October 2010. It was my second year as a founding member and Creative Associate of Wales’ English-language national company. I had directed the 5th show in National Theatre Wales’ first year: The Beach, an interactive theatre game on the beach at Prestatyn in July 2010. I also created artistic and community debate-and-response programmes, including our New Critics scheme that supported emerging writers to develop their critical writing through mentoring, workshops, feedback and a conference.

I was really excited to see Gary’s new play: a strong drama that responded intelligently to the ubiquitous reporting at the time of Bridgend county’s suicide incidents. The creative team and wider National Theatre Wales company members worked with artists and young people in Bridgend to investigate and tell the truthful local stories. We partnered with Guy O’Donnell, who at that time was Arts Projects Officer for Bridgend County Council, to spread the learning of the New Critics scheme and offer similar training to young people through Bridgend County Council arts projects. We delivered critical writing workshops for Bridgend’s young people so they could have a greater range of writing tools to respond to their first show, happening on their doorstep: Love Steals Us From Loneliness.

From these first collaborations, the Young Critics movement in Wales was born. Guy worked to engage more young people, firstly across Bridgend county and then across South Wales and more widely across the nation. National Theatre Wales provided more support through workshops and feedback from our own New Critics, especially Ben Bryant who was being mentored by Lyn Gardner and wanted to share his learning more widely. The Young Critics membership grew and structured its own bespoke programme, engaging with more arts and cultural organisations to provide greater access to exhibitions and open rehearsals, tickets to performances and interviews with artists. Conversations and critiques about creative performance, arts and culture sprang up online, in blogs, in videos, on social media: we heard voices talking about the arts that were different than those we had heard over the past years. The Young Critics scheme always had the learning and experiences of the young participants at its heart; from these experiences, many young critics became young artists, who are now engaging in the arts world in a different way, as emerging directors, writers, actors, producers and other creative practitioners. Young Critics opened the artistic world to make myriad experiences, jobs and roles more visible and more attainable.

I remember a teenager in one Bridgend workshop talking to me about how I became a theatre director. I talked about my training, my life experiences; she told me about her passions and what she was up to. Three years later, she interviewed me as a Young Critic about my directing process during rehearsals for my production for Dirty Protest, Parallel Lines by Katherine Chandler. She said she was thinking about being a theatre director, and these interviews and seeing and talking about work were all helping her development. This young woman was Chelsey Gillard, who two years after this interview became an emerging director with The Other Room pub theatre in Cardiff and is now a young director in her own right.

The Young Critics’ collegiate approach has influenced the professional theatre scene in Wales. The Young Critics created the first ever Theatre Critics of Wales Awards in 2013. They invited professional theatre critics from Wales to join them in nominating and voting. The ceremony was open to all: a joyful celebration of Welsh performance and growing arts analysis voiced by young people. In 2014, the production I had directed for Dirty Protest – Parallel Lines – won the Critics’ Choice Award for Best Production in the English Language. For the first time I could remember, because the Young Critics scheme had opened up arts criticism to more than a few privileged voices, I needed more than two hands to count the number of reviews and critical blog posts the show received. I was thrilled to win the award not just because I was proud of the show and the team; the awards ceremony seemed to show a turning point in democratizing Welsh arts culture and criticism, as smaller project-funded companies were celebrated (and won more awards) than the larger core-funded portfolio organisations. 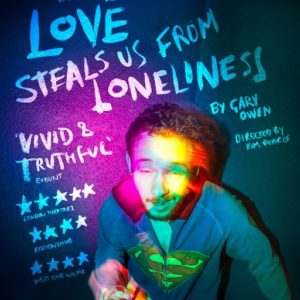 It’s two years later, and a new production of Love Steals Us From Loneliness opens at Chapter in Cardiff this week, the first production created by new company Chippy Lane Productions. The Young Critics scheme has merged with the Third Act Critics (for older people) and Community Critics Wales for critics aged 25-50 years and now all three projects  operate under the umbrella of host organisation Get The Chance to engage even more people to see, participate in and write about arts and culture. Arts and cultural organisations ensure a seat for members at productions, alongside the national newspapers and TV journalists.

The Young Critics and Get the Chance are at the forefront of a movement towards democratisation of arts production and cultural criticism. Wales has a strong history of DIY arts activity, from choirs to theatre to craft. Digital and online media platforms mean that now more people can create and distribute art and cultural criticism. It’s very hard to make a living from arts criticism as newspapers close the few positions they have and digital distribution is largely unpaid. There are debates around whether opening up these fields to more people strengthens or dilutes the work.

I suggest that in line with American public radio host Ira Glass’ comments on creativity, when we all start out with creative endeavours, no matter our age, we get better the more experience we get through practicing, rehearsing and doing:

“Nobody tells this to people who are beginners, I wish someone told me. All of us who do creative work, we get into it because we have good taste. But there is this gap. For the first couple years you make stuff, it’s just not that good. It’s trying to be good, it has potential, but it’s not. But your taste, the thing that got you into the game, is still killer. And your taste is why your work disappoints you. A lot of people never get past this phase, they quit. Most people I know who do interesting, creative work went through years of this. We know our work doesn’t have this special thing that we want it to have. We all go through this. And if you are just starting out or you are still in this phase, you gotta know its normal and the most important thing you can do is do a lot of work. Put yourself on a deadline so that every week you will finish one story. It is only by going through a volume of work that you will close that gap, and your work will be as good as your ambitions. And I took longer to figure out how to do this than anyone I’ve ever met. It’s gonna take awhile. It’s normal to take awhile. You’ve just gotta fight your way through.”

If anything is to be new, it’s got to be allowed to be different, or not as good as our ambitions want it to be, when we first start out. That’s how we create new things and make change happen. 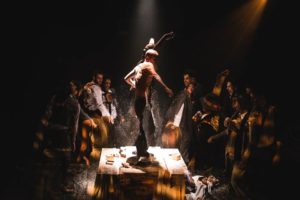 It’s an issue that I reflected on whilst directing theatre in Brazil earlier this year. I created a new production of The Merchant of Venice for Shakespeare400, relocated to Belo Horizonte. Professional full-time actors in Brazil are rare; most performers are poorly paid and rehearse in the evenings only over a period of 9 months because they need full-time day jobs to live. The ensemble cast were chosen for their talent and their diverse mix of ages, backgrounds, religions, political leanings, class, race, gender, sexuality. Some of them almost didn’t audition because Shakespeare is seen as an elite theatre form in Brazil; it wasn’t something they are normally allowed to make. Through rehearsals, their barriers came down and their confidence grew. They made Shakespeare belong to them, they owned it, they spoke the language in their own voice, and reflected on their contemporary experiences through a 400-year old story. This was radical theatre in Brazil. 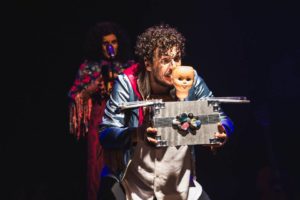 The critics and cultural analysts responded: we had TV, newspaper and online interviews, photo shoots, blogs, articles and previews in the lead up to the first night, and this generated queues of audience members snaking around the building to see the show. But after opening night – nothing. No reviews whatsoever. Critical arts culture just does not exist in the same way as we know it in Brazil. Arts journalists exist to preview and promote high profile art, they are almost a “what’s on” guide.

For a richly diverse culture, theatre production and arts criticism in Brazil is largely homogenous. The same voices are heard through the same networks. New productions and new critical avenues are opening up slowly. Culture is seen as democratic, as the population are keen dancers, singers, sportspeople and other cultural consumers, notably through annual Carnival celebrations and samba competitions. But hierarchies within social, educational and cultural structures mean that most people don’t have access to high art, like Shakespeare theatre performances. In a country of extreme gaps between poor and rich, with corrupt politicians and police forces, where violent crime is experienced daily and the legacy of slavery is omnipresent, there are big debates about ownership of stories and arts, and who has the right language, means and background to participate and comment. 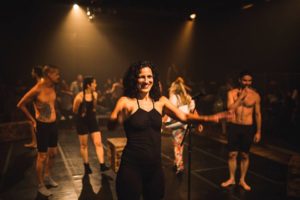 Just as the UK’s media responded to the young suicides in Bridgend by creating a distorted narrative that didn’t reflect reality, this happens daily to young people from poor backgrounds in the favelas and slums of Brazil, as their regional and national newspapers misrepresent them. Just as Bridgend needed a different story at the time of Love Steals Us From Loneliness, so do many people across the world who are not permitted to tell their own stories.

In Wales we run the risk of a homogenised culture if we don’t allow new voices and faces to come through arts. The Young Critics scheme and Get the Chance are providing an avenue to support these voices to be heard on a validated platform, alongside professional and already-respected individuals. I hope the new updated production of Love Steals Us From Loneliness shows us how Bridgend has changed since 2010, leaving those news reports of the time far behind. I have certainly witnessed the creative scene in Wales change in that time, thanks to the activities of National Theatre Wales, the Young Critics and the many, many arts projects run by creative people and organisations across the nation, as well as those Welsh artists and companies who have raised the profile of Welsh arts outside the country through touring and co-productions.

As a theatre director, I want to share my experience, passion and any privilege I have as a cultural leader in Wales to support and elevate others. Democratising arts and critical response is vital to hear more voices, understand others’ perspectives, imagine alternative possibilities and create change. This was the aim of my work with National Theatre Wales when Love Steals Us From Loneliness was first produced, and six years later, although we have made positive advances, the current political climate towards bunkered populism means a fight for democracy, diversity and pluralism is even more vital than ever. The arts world in Wales mustn’t bunker down ourselves, close ourselves off through fear of losing resources, risk quality, or become responsive service providers for ‘customers’ or ‘users’. We need the vision to lead, democratise and share, so that through elevating others we elevate everyone and ourselves.